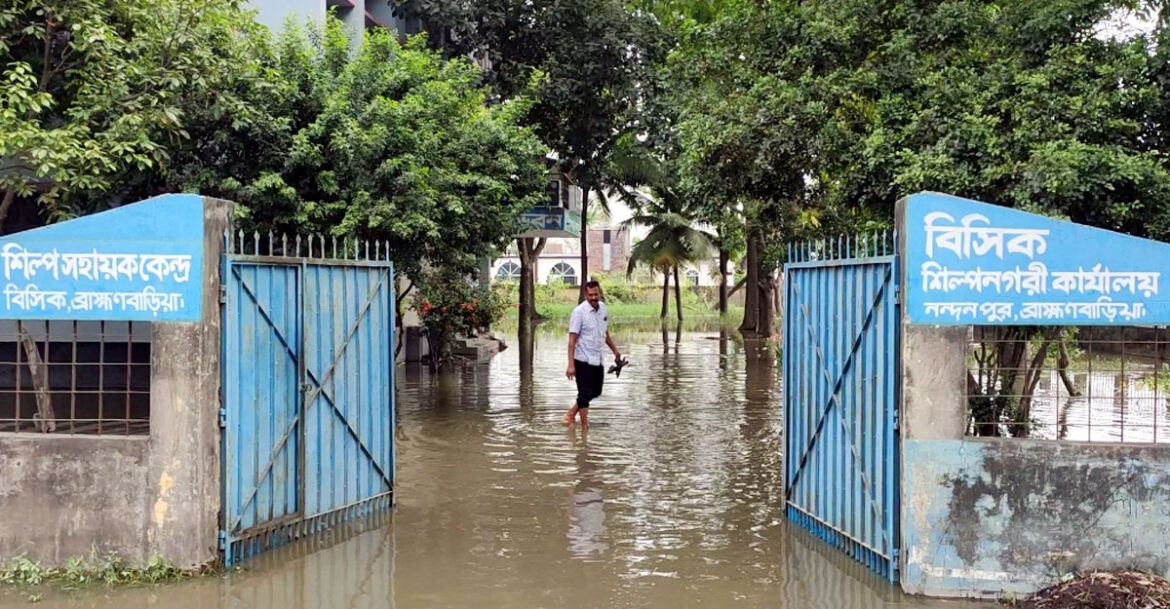 The Charlene Highway from Ashuganj in Brahmanbaria to Akhaura Land Port has been filled up for construction work. This has created waterlogging in the industrial city. At least 40 factories have been shut down for the past three days due to flooding.

It is learned that an industrial city was formed in the Nandanpur area of ​​Brahmanbaria Sadar Upazila in 1997-98 under the Bangladesh Small and Cottage Industries Corporation (BSIC). There are 136 plots of ‘A’, ‘B’ and ‘S’ category in this industrial city of 21.96 acres. All are allocated to traders.

At present there are 60 factories in operation in the industrial city. Among them there are 1 pharmaceutical factory, 16 metal factories, 6 flower mills, 3 soaps, 3 sodium silicates, 5 bakeries and 1 barbed wire factory. About 3000 workers are working in these factories.

The Department of Roads and Highways (RHD) is upgrading the highway from Ashuganj river port in Brahmanbaria to Akhaura land port in four lanes. For this development work, the RHD authorities filled several small canals adjacent to the highway with sand. This has created waterlogging in many places. The canals adjacent to the BSIC industrial city were also filled 7-8 days ago. As a result, knee-deep water has accumulated in the inner roads of the industrial city. Due to waterlogging, water has also seeped inside the factories. As a result, at least 40 factories have stopped production.

Hafiz Uddin, assistant manager of Jabed Metal Industries, said that even though water did not enter their factory, water was splashing in front of them. Buyers from outside cannot come to the factory to pick up the goods. As a result factory production has been reduced. Because the product is not going to be supplied to the buyers. He said that he is in danger of big losses.

New Mamuni soap factory owner. Akhter Hossain said, “Knee water has accumulated inside and outside my factory.” Everything inside the factory is now under water. Being forced to stop the production of the factory. I have already lost Rs 10 lakh worth of soap in the water. Soap production of at least 1 lakh rupees is being disrupted every day. The total loss will be 20-25 lakh rupees.

Rajiv Kumar Das, plant manager of Madrex Life Science Limited, said water had accumulated around and inside the factory due to waterlogging. As a result, the factory has stopped production for the last 3 days. Drug production of at least 10 lakh rupees is being hampered every day. He demanded the concerned authorities to resolve the issue quickly.

General Secretary of the Business Owners Association of BSIC Industrial Estate. Jamal Uddin said the canals have been filled without any drainage system. Waterlogging has been created due to non-removal of water. As a result, most of the factories have stopped production. At least 1 crore rupees is being lost every day. If this situation continues, the activities of BSCIC will be completely stopped.