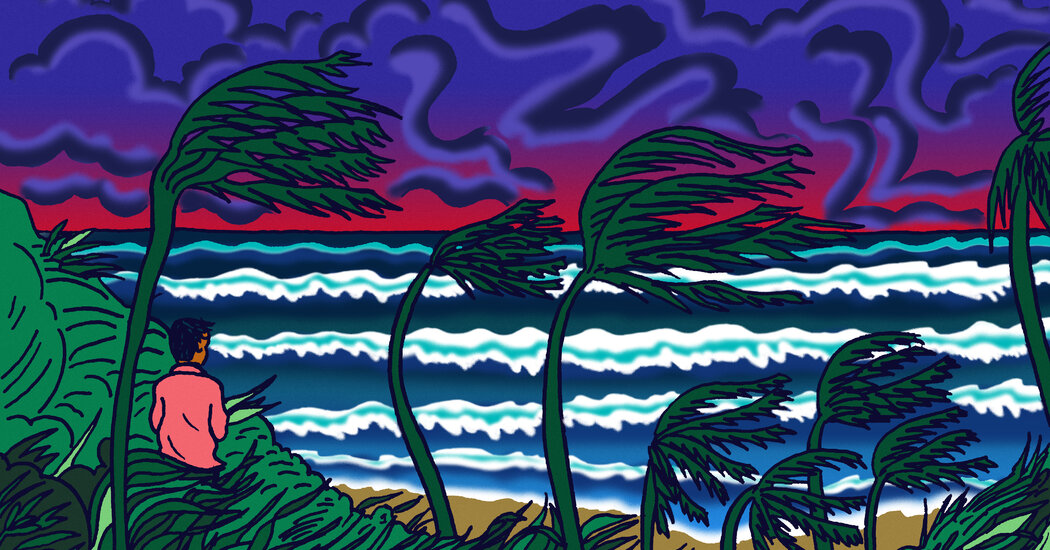 So, we have our stakes. And yet, as the plot spools out in a relatively staid order — A then B then C, with some jumps in time and interludes of poetry — Vishnu never seems to engage with those stakes in any significant way; things simply happen, and we move on. Through dialogue, we learn of the family’s ancestral fall from grace, offhand commentary about pigmentation and the anglicizing of names, and surprising admiration for local remnants of French and British colonizers. But neither dialogue nor narration gives way to the characters’ interiority.

This absence is most jarring when the narrator approaches matters of colonialism, class or race as if they are neither good nor bad, but simply the way life is. When Vishnu’s father says a family friend “thinks an English name fits his skin color better,” Busjeet reveals no reaction on Vishnu’s part; the next sentence cuts to another scene. When we do glimpse his thoughts, they often lack depth. When Vishnu’s Mauritian friends predict his future success, “I smiled, but I didn’t know what to say,” Vishnu narrates. “Sure, my goal was to thrive among the elite. I was flattered, but what if I let them down?”

If there’s little of Vishnu’s inward life on the page, there’s certainly plenty of his surroundings. The middle of the novel takes us through natural disasters, political upheaval, bureaucratic corruption and economic instability. For readers unfamiliar with Mauritius, this history is illuminating, the richness of detail showcasing some of the best writing in the book. As Cyclone Carol menaces the island in 1960, Busjeet moves from a description of the marijuana the island’s Hindus partook in on happier occasions, to a sky stained blood-red by storm winds, then to a scrum of customers angling for a shop’s plywood and canned food, overseen by the savvy “white-haired Chinese woman counting on an abacus” while dispensing disaster survival advice. The tension in such moments is palpable enough to inject needed bits of fuel into the story.

Eventually, Vishnu arrives, in more ways than one. He wins a secondary school scholarship on the island, and later travels to London. He’s admitted to one Ivy League university and then another, securing several mentorships that give him contact highs off of old-money America. In several moments where he might be derailed — like when he’s assigned a work-study job he thinks is beneath him, in the kitchen of the Yale dining hall — Vishnu deploys the sort of slick, self-important persuasiveness many a political insider would kill for. While he occasionally overreaches and stumbles (in an entertaining sequence during a college internship in Washington, D.C., a single expensive dinner renders him penniless, forcing him back into the sort of kitchen job he’s previously avoided), Vishnu never second-guesses his ultimate goal of social status and material wealth. He’s most reflective when pridefully examining his “sookwaar,” or delicate, hands, in contrast to the callused hands of the working men around him; but the observation opens no door to deeper thoughts about inequity. Nor is there much room for nuance in Vishnu’s regard for the United States, which he blithely endorses, if not admires.

Is there anything wrong with this? It is a fantasy of the well-heeled that there’s something inherently noble or soul-validating to be found in blue-collar struggles with economic decay. A reasonable level of wealth, and the security and comfort it brings, remains a central goal for most of us, migrant or otherwise. But read in our current moment, when American pursuit — glorification, even — of excess has resulted in one of the most pernicious societies in modern history, Vishnu’s heedless pining for the one percent feels, at best, problematic. There are flashes in the final pages that he might be starting to realize this (“Was I at heart a non-materialist?” Vishnu ponders after failing to secure an investment banking job. “Or did I enjoy the good life that money brings?”), but they’re too ambivalent to count as a moral progression.