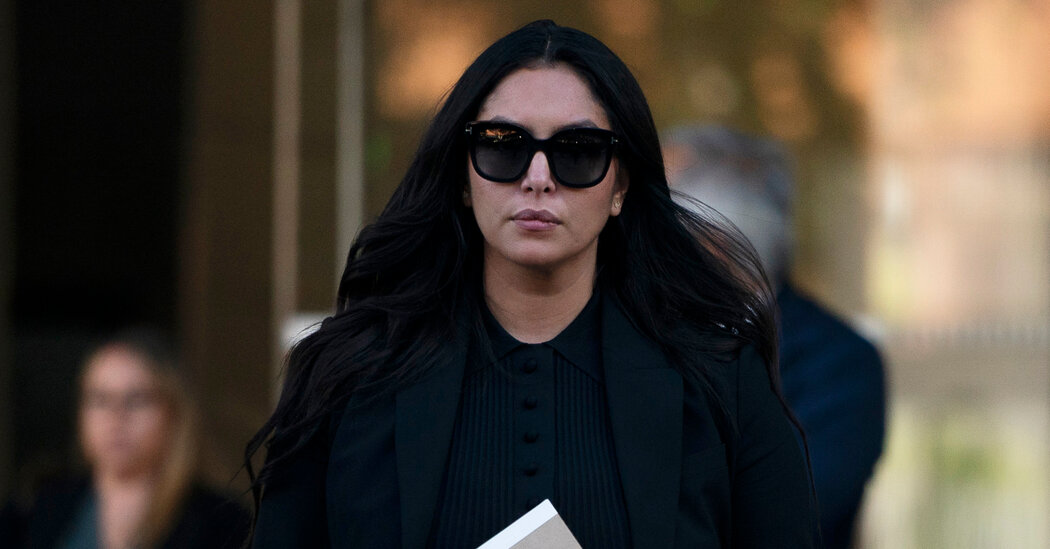 Vanessa Bryant, the wife of the late basketball star Kobe Bryant, is expected to testify at a trial this week after she sued Los Angeles County and some of its agencies and employees for sharing photos of human remains from the helicopter crash that killed her husband and daughter.

The January 2020 crash killed Mr. Bryant, his 13-year-old daughter Gianna and seven others as they traveled to a youth basketball tournament at Mr. Bryant’s academy in Thousand Oaks, Calif., northwest of Los Angeles.

Mr. Bryant, 41, joined the N.B.A. out of high school, spending his entire 20-year professional career with the Los Angeles Lakers. He won five championships and retired in 2016 as one of the N.B.A.’s top career scorers and one of the world’s most popular sports figures.

In her lawsuit, Mrs. Bryant accused Los Angeles County sheriff’s deputies and fire department employees of negligence and invading her privacy by sharing crash photos “without any legitimate purpose.”

Mrs. Bryant said she “has suffered (and continues to suffer) severe emotional distress” and that she feared that the photographs would appear online.

“I do not want my little girls or I to ever have to see their remains in that matter,” Mrs. Bryant said during a deposition in October 2021. “Nor do I think it’s right that the photographs were taken in the first place because it’s already tough enough that I have to experience this heartache and this loss.”

Officials with Los Angeles County and the sheriff’s and fire departments have acknowledged that photos were shared, but said they were deleted.

The trial began Aug. 10. Here is what else to know about Mrs. Bryant’s lawsuit.

What caused the crash?

More than a year after the crash, the National Transportation Safety Board determined that the pilot’s “poor decision” to fly at excessive speeds in foggy weather was the probable cause of the accident. The pilot, Ara Zobayan, was among those killed in the crash.

[Read the 86-page final investigation report from the N.T.S.B., which includes a six-page executive summary.]

The safety board found that Mr. Zobayan had become so disoriented in the clouds that he thought he was ascending when he was turning left just before the helicopter crashed into a hill near Calabasas, Calif.

The board also faulted the charter company, Island Express Helicopters, for “inadequate review and oversight of its safety management processes.”

In a January court filing, Mrs. Bryant’s lawyers said close-up pictures of Mr. Bryant’s and Gianna Bryant’s remains “were passed around on at least 28 Sheriff’s Department devices and by at least a dozen firefighters,” including at a bar and an awards gala. In her lawsuit, Mrs. Bryant claimed that social media users had said they had seen the photos.

Mrs. Bryant named four sheriff’s deputies in her lawsuit and accused them of sharing the photos with each other, other deputies or family members. The Los Angeles Times reported in February 2020 that one of the deputies — identified as Joey Cruz in Mrs. Bryant’s lawsuit — showed the photos at a bar, prompting a bar patron to file a complaint with the sheriff’s department.

Emily Tauscher, a captain at the Los Angeles County coroner’s office, testified at trial that after the crash Mr. Bryant was identified by his skin tone and arm tattoos.

Los Angeles County and law enforcement officials have said that the photos were deleted and never “made it into the public arena.”

What has been the county’s response to the lawsuit?

“The County continues to express its deepest sympathies for the families that suffered this terrible loss,” Mira Hashmall, the lead outside counsel for the county, said in a statement. “The County has also worked tirelessly for two and half years to make sure its site photos of the crash were never publicly disseminated. The evidence shows they never were. And that is fact, not speculation.”

The county has not called any witnesses yet, but in a court filing its lawyers are pushing to include some of Mrs. Bryant’s Instagram posts at trial to counter her claims of severe emotional distress caused by the shared photos. Mrs. Bryant’s lawyers have said her posts on Instagram, where she has 15.5 million followers, are not relevant to this case.

The disputed posts include Mrs. Bryant and her family on vacations. Mrs. Bryant also shared images of herself dressed as the Disney character Cruella de Vil from the “101 Dalmatians” movie franchise.

What has happened so far during the trial?

The trial, as anticipated, has been emotional.

Mrs. Bryant wept during the opening statements made by her lawyer, Luis Li.

The accounts provided by emergency medical workers who took graphic photographs are conflicting. Brian Jordan, a retired fired captain who said he was ordered to take photos of the crash scene, left the witness stand three times because he needed breaks to finish his testimony.

“I do not remember what I took pictures of,” Jordan testified. “The way the whole scene looked, it’s going to haunt me forever.”

Deputy Rafael Mejia, who is named in the lawsuit, testified he received 15 to 20 photographs from another deputy the day of the crash. He said he sent about 10 of the pictures to two deputies, including Joey Cruz, who later would share them in public with a bartender. Mejia expressed regret over sharing the photos, saying, “Curiosity got the best of us.”

Cruz testified that he made a “misjudgment” when he shared the photos.

Lakers General Manager Rob Pelinka, who was Gianna Bryant’s godfather and had been Mr. Bryant’s agent before becoming a team executive, detailed his relationship with Mrs. Bryant and testified about the anxiety she had experienced because of the shared photos.

“She wants an air of love and joy and peace and she does everything she can do to preserve that,” Mr. Pelinka said. “You experience the grief from loss, but there’s also the anxiety from these deplorable actions.”

What else did Mrs. Bryant say during her deposition?

Mrs. Bryant said she learned of the accident when a family assistant knocked on her door in the late morning of Jan. 26, 2020. As she tried calling Mr. Bryant, notifications of people mourning Mr. Bryant popped up on her phone.

Mrs. Bryant said she went to an airport in an attempt to secure a helicopter to take her to the crash site but was told the weather conditions were not safe. Mr. Pelinka drove Mrs. Bryant to the sheriff’s station in Malibu, near the crash site, she said.

At the station, “no one would answer” questions about her husband and daughter, Mrs. Bryant said. She was escorted back and forth between rooms, and after a long wait, a pastor walked in and Sheriff Alex Villanueva entered with a publicist. Mrs. Bryant said she wanted privacy and asked the publicist to leave the room.

Villanueva confirmed the deaths, Mrs. Bryant said, and asked if he could do anything for her.

How much is Mrs. Bryant suing for?

Mrs. Bryant is suing for compensatory and punitive damages.

“That would be up to the jury,” Mrs. Bryant responded when asked during her deposition how much money she sought. “I don’t — I’m not asking for a dollar amount.”

Are the families of other crash victims involved in Mrs. Bryant’s case?

Christopher Chester, whose wife, Sarah, 45, and daughter, Payton, 13, died in the crash, is joining the lawsuit. Two other victims’ families settled for $1.25 million each last year.

Has any other litigation involving the crash been settled?

Mrs. Bryant and the family members of the other victims reached a settlement in June 2021 with Island Express Helicopters, its owner, Island Express Holding Corporation and the estate of Mr. Zobayan.