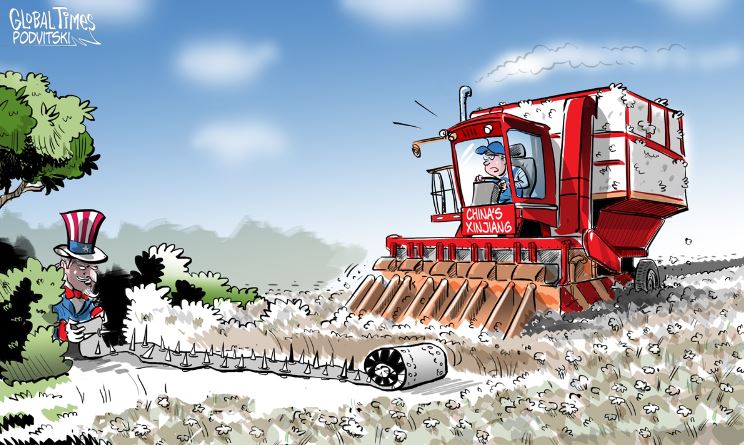 As the US begins enforcement of the so-called Uyghur Forced Labor Prevention Act (UFLPA) on Tuesday to scrap imports from China’s Xinjiang region citing “forced labor” concerns, the Chinese government condemned it as an attempt to create “forced unemployment” and is economic coercion.

Analysts said that since the US takes the enforcement of the malicious law as a rehearsal for decoupling with China in the future, global manufacturers and multinational companies will find they are facing numerous difficulties and complexities in complying with the law, with the US contributing to more globalization uncertainties and global supply chain chaos.

Congress passed the UFLPA in December 2021 and US President Joe Biden signed it into law. It bans products made in China’s Xinjiang, smearing the Chinese government over “oppression” of the Uygur and other minority populations in its Xinjiang region.

On Tuesday, Foreign Ministry spokesperson Wang Wenbin expressed China’s strong condemnation and opposition to the so-called forced labor act, noting that what it terms “forced labor” in Xinjiang is a big lie made up by anti-China forces. He said the US is trying to create “forced unemployment” in China’s Xinjiang region and push for decoupling from China around the world, which fully exposes the essence of its hegemony to undermine human rights and international rules.

The implementation of the UFLPA to sanction entities and individuals in Xinjiang is suppression of China under the guise of human rights, and a vivid demonstration of the US’ destruction of the stability of international supply chains, said Wang, stressing China will take forceful measures to firmly safeguard the legitimate rights and interests of Chinese companies and citizens.

Soon after the Foreign Ministry spokesperson’s opposition on Tuesday, the spokesperson of China’s Ministry of Commerce (MOFCOM) released a statement opposing the UFLPA, saying that the US has engaged in unilateralism, protectionism and bullying in the name of human rights, seriously undermining market principles and violating WTO rules.

What the US is doing is a typical act of economic coercion. It seriously harms the vital interests of businesses and consumers in China and the US, and it is neither conducive to the stability of global supply chains nor to the recovery of the world economy, said the MOFCOM spokesperson.

China has created various opportunities to ensure employment for residents of all ethnic groups in the Xinjiang region, and helped them promote vocational skills, seek jobs within and outside the region and better enjoy the development of the country, analysts said.

However, the US attempts to suffocate the economy of the Xinjiang region, aiming to create mass unemployment of Uygurs to stir up disturbances and eventually contain China. It seeks to threaten companies that employ Uygur and people of other ethnic groups, so as to prevent their products from entering the US, which is racial discrimination against Uygurs, analysts criticized.

Bring nothing but chaos

The UFLPA creates a “rebuttable presumption” that all goods partially or wholly produced in the Xinjiang region are “tainted by forced labor.” The focus for the law enforcement is apparel, cotton related products, tomatoes and other products related to Xinjiang. It requires corporations to prove with “clear and convincing evidence” that imports from the region are not made by forced labor.

However, The UFLPA will have a limited effect on Xinjiang as China’s vast domestic market and its needs will help cushion the shock. It is the US and multinational companies that will suffer more, Wang Jiang, a distinguished research fellow at the Institute for Frontier Region of China, Zhejiang Normal University, told the Global Times.

More companies will need to conduct reviews to comply with the law, which would be difficult and the more complicated and globalized the supply chain a company is in, the more cost it pays for. Given the US’ positions in the global supply chains, US importers would be affected the most, Wang said, noting that the malicious law, which will not protect either human rights or Uygurs, will bring nothing but chaos.

The UFLPA did not explicitly disclose standards before it was implemented on Tuesday. The Operational Guidance for Importers released by the US Customs and Border Protection on June 13 only sets de facto standards for subsequent enactment, which leads to a high possibility of numerous problems in law enforcement, Wang Keyou, a partner at Beijing Global Law Office specializing in export control and economic sanctions, told the Global Times on Tuesday.

There is no doubt that the US government will select certain industries and enterprises as targets while letting some companies slip through with products that are urgently needed in the US given the serious domestic inflation situation, Wang Keyou explained.

The UFLPA has drawn controversy even within the US with some US companies, including Apple, Nike and Coca-Cola reportedly trying to lobby the US Congress to weaken the act. The Senate and the House had several rounds of “battles” due to differences in each other’s versions.

The US is using the law to test China’s bottom line and make it a rehearsal for decoupling with China. US lawmakers also want to forecast the consequences of decoupling with China and test how they can mobilize Americans, companies and other countries to follow, said Wang Keyou, noting that the final result may disappoint the US as bilateral trade with China is complicated and highly integrated amid globalization.

Take cotton – the first US target to ban from the Xinjiang region – as an example. According to data from the US Customs and Border Protection’s Office of Trade, the US imported about $9 billion worth of cotton goods from China overall in 2021. Xinjiang accounted for nearly 90 percent of China’s domestic cotton production in 2021.

As China’s Xinjiang cotton accounts for 20 percent of the world’s annual production, an owner of a cotton mill who declined to be named told the Global Times that US sanctions on Xinjiang cotton would deal a blow to the global industrial and supply industry.

“Other countries can’t fill the supply gap,” he said, noting that the US produces only about 4 million tons of cotton every year while Southeast Asia also needs a large quantity.

Other industrial chains that may be affected by the US law include the global photovoltaic (PV) industry and supply chain, with 45 percent of the world’s supply of solar-grade polysilicon coming from the Xinjiang region, as well as agricultural production and equipment, analysts said.

This UFLPA violates the laws of the market economy, and undermines market rules and systems that have been effectively formed in the global industrial chain. Washington, with its notorious Xinjiang act, is interfering in the global value chain for political purposes, Bao Jianyun, director of the Center for International Political Economy Studies at Renmin University of China, told the Global Times on Tuesday.

The destructive bill will come back to bite the US itself ultimately. The US economy is now mired in many problems, including skyrocketing inflation, a stock market bubble, emerging signs of recession and mounting debt. The act will further tighten supply in US markets and push up inflation. It will also be a stain on the creditworthiness of US treasuries, and will increase the perception of risk in financial markets. Moreover, messing up global industrial chains will inevitably impact the overall output of the global economy, including in the US, Bao explained.

Some US allies are mulling whether to follow with their own bans. On June 9, the European Parliament adopted a resolution calling on the European Commission to fight against “forced labor” by banning the import of products made from China’s Xinjiang region, Le Monde reported.

In response, analysts warned countries, especially those in Europe, to be cautious in following the US in banning products from the Xinjiang region as their supply chains may not be strong enough to withstand the consequences.

Businesses are profit-driven. In order to maintain their market share, companies would have to adjust their layouts and eventually build new value chains that bypass the US in the long run. At the end of the day, a trend of “de-Americanization” of the global industrial chain would form and Uncle Sam will end up shooting himself in the foot, Bao noted.

China, as the global manufacturing hub, has cultivated deeply intertwined industrial cooperation with most of the major economies across the world. It is simply impractical to attempt to replace China in the global supply chain with one bill, Bao stressed.