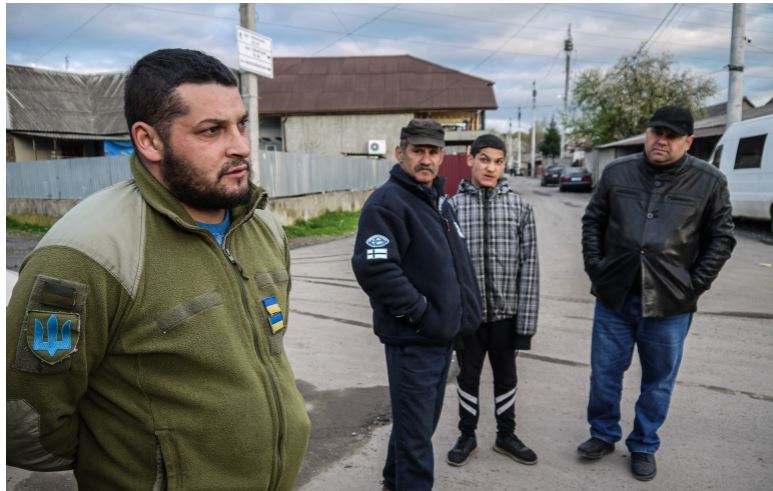 Uzhhorod, Ukraine – “It was his dream to defend Ukraine,” 23-year-old Angelina Debyosh says of her husband, who is fighting Russian forces in Mariupol, on the other side of Ukraine.

In her small and bare house with a sloping floor in Uzhhorod, in the war-torn country’s southwest, a gaggle of kids crowd onto a loose mattress that serves as a main piece of furniture.

Debyosh’s husband, 31-year-old Igor Kotlar, is a former taxi driver who enlisted in the Ukrainian army in 2018.

They share five young daughters and are both of a Roma background.

The road through their settlement, Radvanka, which runs next to a cement factory in the border city near Hungary and Slovakia, is pockmarked.

Houses here are visibly hand-built from cinder blocks, some with gaps in the walls, and lack gas and running water.

Despite being persecuted and marginalised throughout Ukraine’s history, the Roma minority – an estimated 400,000 people – have contributed enthusiastically to the war effort.

In dilapidated Roma neighbourhoods like Radvanka, Ukrainian flags are often seen fastened to walls or on flag posts.

Since the start of the Russian invasion on February 24, Roma churches have collected food and medicine, and in western Ukraine, Roma volunteers have provided shelter to Roma and non-Roma evacuees.

Several families Al Jazeera interviewed said with pride that they boasted more than one service member.

According to Angelina, two of Igor’s relatives – a cousin and an uncle – are also fighting in the army.

“[The war] has brought us together,” ventured Myroslav Horvat, a Uzhhorod city councillor, and one of two ethnic Roma on the 38-member elected body.

“This genocide that is happening in Ukraine is a shared misfortune. When the bombs fall, they don’t just fall on Roma or non-Roma; they fall on everyone.”

Downtown Uzhhorod is a more comfortable area. It has a substantial middle class, and mainstream city dwellers live in apartment blocks connected to utilities.

By contrast, the Roma here subsist in settlements they built for themselves decades ago, that have been never fully recognised or provided for by the municipality.

This pattern of marginalisation is repeated in many Ukrainian cities. Poverty and social exclusion are common, as are social prejudices that associate the Roma with crime.

But Roma soldiers are among those who have been deployed to the war’s toughest locales.

Horvat estimates at least 60 Roma from the Transcarpathian region, which includes Uzhhorod, are now fighting with Ukrainian forces.

Viktor Ilchak, a 30-year-old father of four, is a tank mechanic.

In March, the armoured vehicle in which he was riding was hit when he was surrounded in a battle by Russian forces in Volnovakha, a city north of Mariupol.

Pieces of shrapnel lodged in his left arm and he was evacuated to a hospital.

He is now at home in Uzhhorod, awaiting redeployment.

Like Igor, Viktor served before the war escalated: he has volunteered for deployments since 2015, confronting Russian-backed separatists in the country’s east.

“On the front line, there is no nation,” he said.

A short, peppy man, he poses confidently in front of a Ukrainian flag.

“Whether you’re Roma, Azeri or Ukrainian, we’re all friends,” he said. “Everything is collective. We consider each other brothers.”

He believes that the Roma soldiers’ service will improve relations between the community and other Ukrainians after the war.

“[They will see that] that Gypsies serve too, that [we’re] good lads.”

“People will change,” he said. “Ukraine will be different.”

Such optimism is refreshing, but Ukrainian media outlets have not been too proactive in reporting the Roma community’s efforts, and many outside are unaware of their contribution.

And while the war is creating a sense of unity, a shared sense of patriotism is unlikely to ease the level of discrimination faced by the minority.

When the war ends, Roma service members who survive the conflict will return to dirt-poor communities where barriers to social integration remain and where the pace of change is glacial.