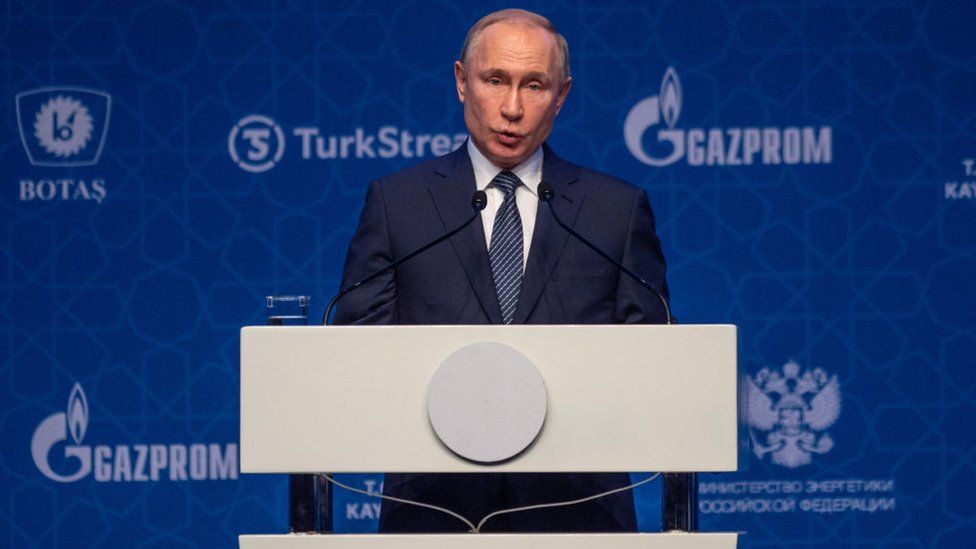 European Commission President Ursula von der Leyen has said the “era of Russian fossil fuel in Europe” is coming to an end.

Her comments come after the Russian energy giant Gazprom said it had cut off gas exports to Poland and Bulgaria.

Kremlin spokesperson Dmitry Peskov insisted that Moscow remains a reliable energy partner and claimed Russia had been forced into the action as a result of “unfriendly steps” taken against it by Western nations.

But Poland’s deputy foreign minister, Marcin Przydacz, told the BBC that Russia was seeking to “foster divisions” between Western allies.

Gazprom’s cut-off follows Poland and Bulgaria’s refusal to pay for gas in roubles.

Last month, Russian President Vladimir Putin decreed that all energy payments must be made in the Russian currency.

The move, which was designed to shore up the faltering currency which has been battered by Western sanctions, has been fiercely resisted by European nations.

In a statement issued on Wednesday, Gazprom said it had “completely suspended gas supplies” to Poland and Bulgaria in line with the decree issued by Mr Putin.

The company also warned the countries – which are transit states for Russian gas – that any unauthorised withdrawal of gas intended for other European nations would see supplies reduced by an equivalent amount.

Polish state gas company PGNiG confirmed that Gazprom’s supplies to the country had been halted and warned that it reserved “the right to seek compensation” and would use “all available contractual and legal means to do so”.

PGNiG bought 53% of its gas imports from Gazprom in the first quarter of this year, but Warsaw has said it can get gas from other sources.

Gazprom says Poland and Bulgaria are being targeted because they have refused to pay for its gas in Russian roubles.

Polish consumers will still have gas from their stoves this morning, but the supply cut is a significant challenge for the remainder of the year.

In the first quarter of 2022, PGNiG bought 53% of its gas imports from Gazprom, down from 61% in the whole of last year. That’s a lot of gas to replace in one go.

Yes, the Polish government has successfully reduced its dependence on Gazprom in recent years, by building a liquefied natural gas terminal in Swinoujscie – where it receives tankers from Qatar.

And pipeline capacity with neighbouring EU countries is increasing. Forward thinking means Poland’s gas storage is about three quarters full and consumer demand is lower over spring and summer.

But the fact remains, Poland still needs to secure alternative supplies for the rest of the year in an already tight global market.

By the end of the year, a new pipeline that will allow Poland to directly import gas from Norway – replacing Russian deliveries – will be fully operational.

2px presentational grey line
Bulgarian Prime Minister Kiril Petkov said the country was reviewing all of its contracts with Gazprom, including for transit of Russian gas to Serbia and Hungary, emphasising that “one-sided blackmail was not acceptable”.

And the country’s Energy Minister Alexander Nikolov accused Russia of using gas as a “political and economic weapon in the current war”.

Sofia, which relies on Gazprom for more than 90% of its gas supply, said overnight it had taken steps to find alternative sources but no restrictions on gas consumption were currently required for Bulgarians.

Ms von der Leyen said Gazprom’s move was “unjustified and unacceptable,” but emphasised that the bloc was “prepared for this scenario”.

The EU leader also hit out against reports carried by the media outlet Bloomberg which alleged 10 European energy companies are preparing to make payments for Gazprom gas in roubles, and that four energy companies have done so already.

She said such moves would be “high risk” for the corporations and would constitute “a breach of our sanctions”.

While the EU has been firm that it will not comply with Mr Putin’s demands that payments be made in roubles, some European nations, including Slovakia and Hungary have reached workaround deals with Gazprom.

The countries will pay into a euro-denominated account with Gazprombank, a subsidiary of the energy giant, which in turn will deposit the amount in roubles.

Mr Peskov refused to say how many other countries have agreed to make payments in this way.