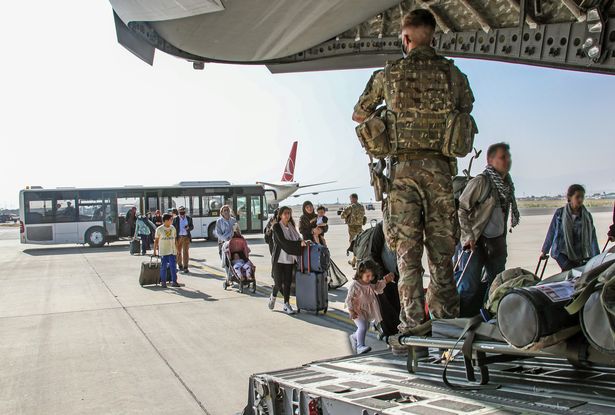 The UK’s evacuation of civilians from Afghanistan will end today, according to the head of Britain’s armed forces.

General Sir Nick Carter said there were still be some civilian flights coming from Kabul to the UK, but “very few now”.

He also shared his heartbreak at not being able to get everyone eligible for evacuations out of the country.

It comes after UK Defence Secretary Ben Wallace warned that up to 1,100 Afghans could be left behind.

Speaking on BBC Radio 4’s Today programme, Sir Nick said the final stages of the evacuation were “going according to plan”.

He said: “We’re reaching the end of the evacuation, which will take place during the course of today, and then of course it’ll be necessary to bring our troops out on the remaining aircraft.

“We haven’t been able to bring everyone out, and that has been heart-breaking. And there have been some very challenging judgements that have had to be made on the ground.”

Boris Johnson admitted he felt “a great sense of regret” about those left behind in Afghanistan.

“Of course, as we come down to the final hours of the operation there will sadly be people who haven’t got through, people who might qualify,” he said at the Foreign Office.

“What I would say to them is that we will shift heaven and earth to help them get out, we will do whatever we can in the second phase.”

Asked whether the scenes seen in Afghanistan amounted to a national humiliation, he said the circumstances were “extremely difficult and extremely horrible”.

He added: “The timing of this is certainly not the one that this country would have chosen, and I think that everybody understands that.”

It comes after it emerged that British veteran and animal rescue charity founder Pen Farthing was allowed inside Kabul airport with 150 cats and dogs.

Kaisa Markhus revealed her husband Pen video-called her from inside Kabul airport on Friday to tell her he had made it through with the animals.

However, his Afghan workers were not allowed to evacuate with him, leaving the former Royal Marine ‘devastated’.

Kaisa said she was overjoyed when she saw her husband safe in the airport with animals from the Nowzad rescue shelter.