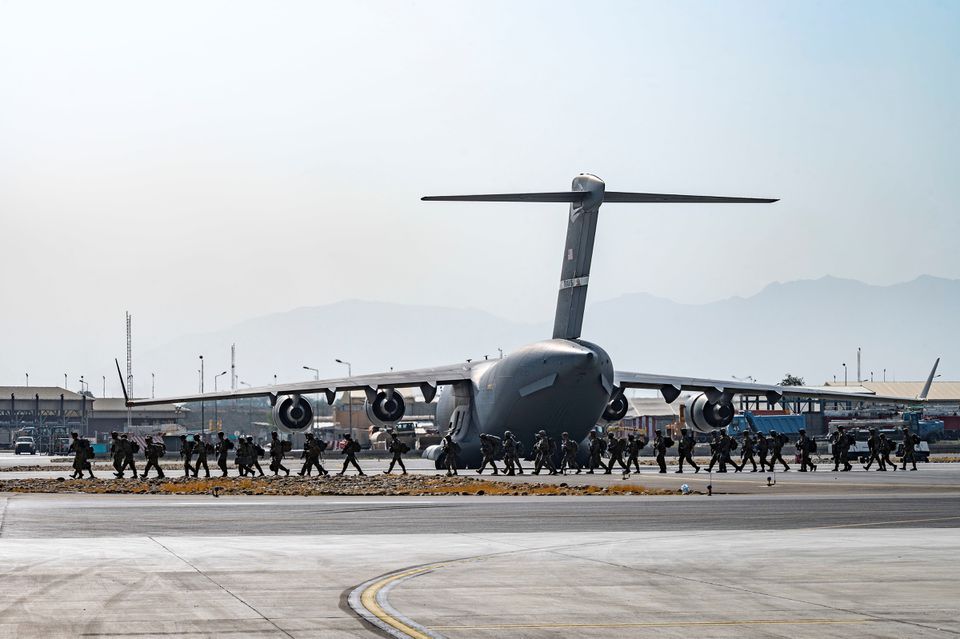 KABUL, Aug 21 (Reuters) – The United States advised Americans in Afghanistan to avoid travelling to Kabul airport on Saturday as thousands gathered trying to flee the country almost a week after the Islamist militants took control.

The advisory came after Taliban co-founder Mullah Baradar arrived in Kabul for talks with other leaders to hammer out a new Afghan government after the Taliban’s lightning advance across the country.

Images circulated on social media this week of Afghans rushing towards a U.S. C-17 transport plane and clinging to its side. A separate video showed what appeared to be two people falling from a military plane as it flew out of Kabul.

Since then, crowds have grown at the airport where armed Taliban have urged those without travel documents to go home. At least 12 people have been killed in and around the single runway airfield since Sunday, NATO and Taliban officials said.

“Because of potential security threats outside the gates at the Kabul airport, we are advising U.S. citizens to avoid travelling to the airport and to avoid airport gates at this time unless you receive individual instructions from a U.S. government representative to do so,” the U.S. Embassy advisory said.

The chaos was not the responsibility of the Taliban, an official of the group told Reuters. “The West could have had a better plan to evacuate.”

Switzerland postponed a charter flight from Kabul because of the chaos, its foreign ministry said.

“The security situation around Kabul airport has worsened significantly in the last hours. A large number of people in front of the airport and sometimes violent confrontations are hindering access to the airport,” the Swiss Federal Department of Foreign Affairs said in a statement.

The Taliban completed their sudden advance across the country as U.S.-led forces pulled out, coinciding with what German Chancellor Angela Merkel said on Saturday was the “breathtaking collapse” of the Afghan army.

The Taliban official said the group planned to ready a new model for governing Afghanistan within the next few weeks, with separate teams to tackle internal security and financial issues.

“Experts from the former government will be brought in for crisis management,” he told Reuters.

The new government structure would not be a democracy by Western definitions, but “it will protect everyone’s rights”, the official added.

The Taliban, who follow an ultra-hardline version of Sunni Islam, have presented a more moderate face since returning to power, saying they want peace, will not take revenge against old enemies and will respect the rights of women within the framework of Islamic law.

When in power from 1996-2001, they stopped women from working or going out without wearing an all-enveloping burqa and stopped children from going to school.

Baradar will meet militant commanders, former government leaders and policy makers, as well as religious scholars among others, the official said without elaborating.

Russia said it was important to establish good and neighbourly relations with Afghanistan. EU Commission President Ursula von der Leyen said on Saturday that the European Union has not recognised the Taliban nor was it holding political talks with them.

About 12,000 foreigners and Afghans working for embassies and international aid groups have been evacuated from Kabul airport since Taliban insurgents entered the capital, a NATO official said.

“The evacuation process is slow, as it is risky, for we don’t want any form of clashes with Taliban members or civilians outside the airport,” the NATO official told Reuters on condition of anonymity.

“We don’t want to start a blame game regarding the evacuation plan.”

Individual Afghans and international aid and advocacy groups have reported harsh retaliation against protests, and roundups of those who had formerly held government positions, criticised the Taliban or worked with Americans.

“We have heard of some cases of atrocities and crimes against civilians,” said the Taliban official on condition of anonymity.

“If (members of the Taliban) are doing these law and order problems, they will be investigated,” he said. “We can understand the panic, stress and anxiety. People think we will not be accountable, but that will not be the case.”

Former officials told harrowing tales of hiding from the Taliban in recent days as gunmen went from door to door. One family of 16 described running to the bathroom, lights off and children’s mouths covered, in fear for their lives.

Baradar, the chief of the Taliban’s political office, was part of the group’s negotiating team in the Qatar capital of Doha.

Reported to have been one of the most trusted commanders of the former Taliban supreme leader Mullah Omar, Baradar was captured in 2010 by security forces in Pakistan’s southern city of Karachi and released in 2018.

The delay in forming a new Afghan government or even announcing who will lead a new Taliban administration underlines how unprepared the movement was for the sudden collapse of the Western-trained forces it had been fighting for years.

The Taliban, whose overall leader, Mullah Haibatullah Akhundzada, has so far been silent publicly, must also unite disparate groups within the movement whose interests may not always coincide now that victory has been achieved.

As Western nations have struggled to speed up evacuations, President Joe Biden confronted criticism about the planning for the withdrawal of U.S. troops.

“I have seen no question of our credibility from our allies,” Biden told reporters after a speech from the White House on Friday. “As a matter of fact, the exact opposite … we’re acting with dispatch, we’re acting, committing to what we said we would do.”

He insisted every American who wanted to would be evacuated. read more

NATO Secretary-General Jens Stoltenberg called the situation outside Kabul airport “very dire and difficult”, as several member nations pressed for evacuations to continue beyond a U.S. deadline of Aug. 31.