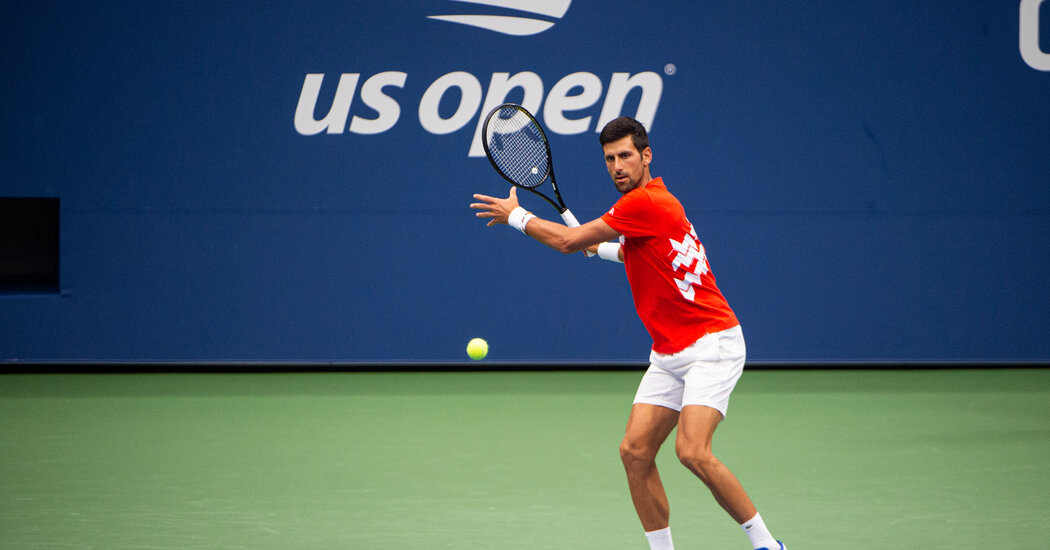 Novak Djokovic has chased down all manner of records on his way to becoming one of the greatest tennis players ever. But he has never been on a tennis treasure hunt quite like this.

Win the U.S. Open, which begins Monday in New York, and he will break his tie with Roger Federer and Rafael Nadal and take sole ownership of the record for men’s Grand Slam singles titles with 21. Win the U.S. Open, and he will also complete the Grand Slam by winning all four major tournaments in the same calendar year. No man has done it in singles since Rod Laver in 1969, including Djokovic’s career-long litmus tests of Federer and Nadal. No player has done it in singles since Steffi Graf swept the four majors in 1988, rarely losing a set along the way, and then topping it off by winning the Olympic gold medal in Seoul.

That was called the Golden Slam, and Djokovic missed his chance at shining as brightly as Graf when he lost to Alexander Zverev in the semifinals of the Olympic tournament this month. Djokovic left Tokyo without a medal, citing a shoulder problem as he withdrew from the bronze medal mixed doubles match. He has not competed since leaving Japan but arrived early in New York from Europe to recover from the jet lag and prepare himself to pursue what could be the highlight of his career.

After the U.S. Open draw on Thursday, the top-seeded Djokovic now has a clearer idea of what awaits him, but hardly full clarity. He will face a qualifier in round one (the qualifying tournament is not yet complete) and would then face Jan-Lennard Struff of Germany or Tallon Griekspoor of the Netherlands in the second round. Djokovic is 6-0 against Struff and defeated him in the second round of the Olympics in straight sets. Djokovic has yet to face Griekspoor, who is ranked 110th.

After that, Djokovic’s path becomes more a matter of conjecture. His third-round opponent could be Kei Nishikori, David Goffin or Mackenzie McDonald, the former U.C.L.A. star who is having a solid season. Djokovic’s fourth-round opponent could be Alex de Minaur or Aslan Karatsev, the Russian who made a surprise run to the Australian Open semifinals in January before losing to Djokovic, and then upset Djokovic in his home city of Belgrade on clay in the semifinals of the Serbia Open in April.

But Karatsev has struggled to win a singles match lately and top form will presumably be required to derail Djokovic in New York. He is a man on a mission and has proved through the years that he can handle the pressure that goes with daunting assignments. He has defeated Nadal twice on clay at his stronghold of Roland Garros, and toppled Federer three times on grass at his stronghold of Wimbledon.

Neither Federer nor Nadal will be in his way in New York. Both are out for the season (or beyond) with injuries. So is Dominic Thiem, the reigning U.S. Open men’s singles champion, who has been slow to recover from a wrist problem. Other than Djokovic, the only men in the U.S. Open draw who have won Grand Slam singles titles are Marin Cilic, the 2014 U.S. Open champion who has dropped to 36th in the rankings, and Andy Murray, who is No. 114 and still chasing his past form after hip resurfacing surgery.

Even with Serena Williams’s and Venus Williams’s withdrawals from the tournament, the women’s draw is brimming with major singles champions. There are 13 in all, including the No. 1-seeded Ashleigh Barty and No. 3 Naomi Osaka, a two-time U.S. Open champion who is in the same eighth of the draw as the past U.S. Open champions Sloane Stephens and Angelique Kerber. Stephens, now unseeded, will face Madison Keys in the first round in a rematch of their all-American 2017 U.S. Open final. The winner is likely to face Coco Gauff, 17, if Gauff can get past her tough first-round opponent, the 51st-ranked Magda Linette.

History argues against Djokovic having a cakewalk to the Grand Slam. The most recent player to come close — Serena Williams — was shocked in the semifinals of the 2015 U.S. Open by Roberta Vinci, an underpowered but resourceful Italian who was able to embrace that bright-spotlight moment with far more free-swinging panache than Williams.

“Serena was two matches away from the Grand Slam, and you never would have thought she would lose to Vinci, but that’s the greatness of the challenge,” said Brad Gilbert, a former top-five player who is now a coach and ESPN analyst.

Strange twists can occur with so much on the line, and Djokovic certainly can speak to strange twists in New York. He eliminated himself in the fourth round last year by inadvertently striking a lineswoman in the throat with a ball he hit after losing his serve in the opening set against Pablo Carreño Busta. Djokovic was defaulted and then lost to Nadal in last year’s French Open final. But Djokovic has not been beaten in Grand Slam play since then, and the biggest threats in New York are likely to be the leaders of the new generation: Zverev and Matteo Berrettini, who are in Djokovic’s half of the draw; and Daniil Medvedev and Stefanos Tsitsipas, who are in the other half.

All four have reached Grand Slam singles finals in the last 12 months. None has yet broken through. Medvedev lost in straight sets to Djokovic in the Australian Open final in February. Tsitsipas lost in five sets to Djokovic in the French Open final in June, and Berrettini lost to Djokovic in four sets in the Wimbledon final in July. They are all gifted, taller than the 6-foot-2 Djokovic, and hungry. They all have big-match experience against him, so if Djokovic does not bring his best down the stretch at Flushing Meadows, it is hard to see him winning.

But though Medvedev, Tsitsipas and Zverev have each beaten Djokovic multiple times, none has yet beaten him in a best-of-five-set match. At age 34, Djokovic remains the best long-form player and most reliable closer in tennis. He is just seven matches away from standing alone in the men’s major count and joining a very exclusive club with a Grand Slam.

That double quest would make headlines in any year, but without Nadal, Federer and the Williams sisters in this U.S. Open, it deserves our attention right from the start.