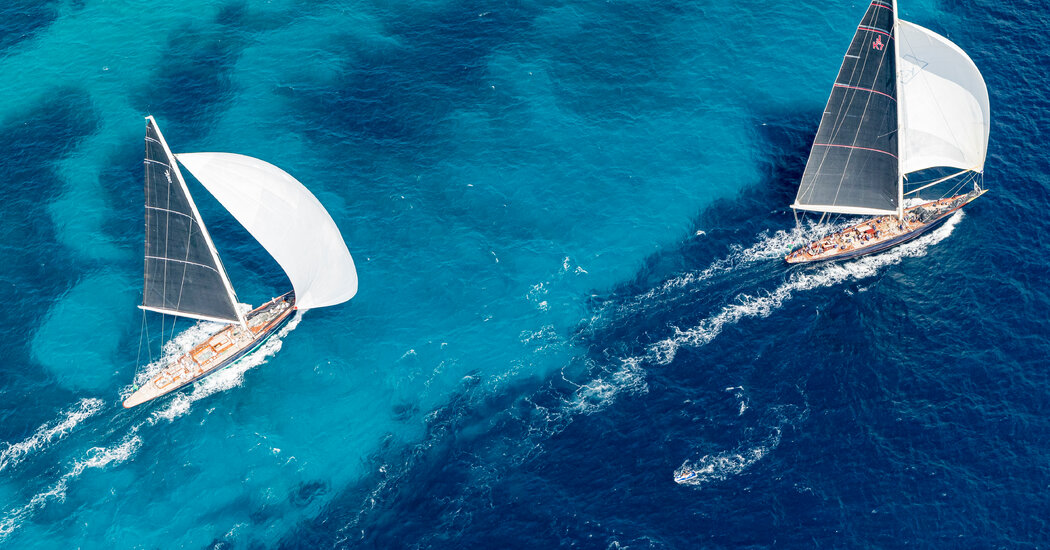 Shelve a sharp blade for a year and it could rust. The same is true of professional, highly trained sailing teams.

While they regularly practice and race, the pandemic forced many teams into hibernation. For some, this hiatus ends with the start of the Maxi Yacht Rolex Cup, which will be hosted by the Yacht Club Costa Smeralda in Sardinia Sept. 5-11.

The catch, however, is that racing big, powerful yachts in proximity to each other and through rock-strewn waters is not simple. Get it right and it is beautiful; bungle things and the boat risks generating expensive splinters. So being rusty is not an option.

This is especially important aboard the J-class yachts, which measure roughly 120 to 143 feet in length and represent some of the biggest yachts racing at this year’s regatta. Preparing to race them in an international regatta after more than a year of pandemic-induced downtime is not easy.

“J boats are extremely challenging to drive and maneuver, and I will definitely require several days to get comfortable and confident again after such a long hiatus,” said Peter Holmberg, an Olympic silver medalist and the helmsman of the 140-foot J Class yacht Topaz, which has not raced since the Superyacht Challenge Antigua in March 2020.

“But after thousands of hours driving boats, I expect to be back in top race mode after the training session and prior to racing.”

The 130-foot J Class yacht Velsheda, which will be competing in the Maxi Yacht, also last raced at the Antigua regatta.

“The standard of the competition will be just as high as ever,” said Barnaby Henshaw-Depledge, captain of the Velsheda, whose core crew has been racing aboard the yacht for almost 20 years. He added they would initially “throttle back” during the regatta because of last year’s downtime. “As the confidence returns, I’m sure we will return back to our usual mode.”

For Hap Fauth, the owner and helmsman of the Maxi 72 Bella Mente, the usual mode is intensive training.

“Over the last 10 years we’ve built discipline into the program,” he said. Fauth said the team traveled internationally with three or four 40-foot shipping containers, one of which has been transformed into a carbon-fiber-fabrication shop, and 32 people, including a chef.

“We look very much like a NASCAR team, very-self sufficient,” he said, adding that the team typically budgets one preregatta practice day for each scheduled racing day. “If you’re going to do it, do it right.”

The current, fourth-generation Bella Mente was launched in 2018. “It’s still a new boat, and last year’s Covid lockdown cost us valuable development time, so I don’t know how we’ll do,” Fauth said.

Growing pains are part of any new racing yacht, but last year’s canceled season was not helpful.

“We’ll be at 85-90 percent,” Fauth said, adding that Bella Mente raced in the New York Yacht Club’s Annual Regatta and at Block Island Race Week, both in June, before the boat was shipped to Europe. “Will we be perfect? No, but there won’t be any penalizing mistakes.”

“We will do two training sessions prior to the regatta,” Holmberg said. Topaz’s first session involved trials for the yacht’s sails, systems and recent modifications with a small crew.

He said the full team then arrived in Sardinia for five days of training. “The focus [was] on both speed and maneuvers,” he said.

While it was impossible to sail a J Class yacht with its crew of 25 to 30, and remain socially distanced, some sailors stayed active.

Fauth was one of the principals who funded the New York Yacht Club’s American Magic team to challenge for the 36th America’s Cup, in New Zealand in March. The team was unsuccessful, but the race provided training opportunities. “Six guys out of the Bella crew of 22 came out of American Magic,” Fauth said, adding that two of these six had previously raced aboard Bella Mente.

While on-the-water time matters greatly, “it would be presumptuous to place us with or without an advantage,” he said about the crew experience on American Magic. “We were here before American Magic, and we’ll be here after them. We’re a whole different program.”

Luc Foltzer, the captain of @robas, a Swan 601 that, at 60 feet, is one of the regatta’s smallest entrants, said the interruption of racing did not have much impact on the crew. “We usually plan a few days of training before the regatta,” he said, adding that @robas would be sailing with only race-hardened veterans.

While Topaz and Velsheda will be welcoming a few new faces into their crews, both teams have the budget, the technology and the culture to efficiently relaunch their programs.

“We place great emphasis on doing complete regatta debriefs and recording all our lessons learned after each regatta,” Holmberg said. “This allows us to pick back up right where we left off and not have to relearn routines, settings and lessons.”

“We have filled all of the roles with world-class sailors, many of whom have either sailed with us before [or] sailed together with our long-term race crew,” Henshaw-Depledge said, adding that his job was to ensure that Velsheda completed the regatta without damage or injuries, “and hopefully comes out with a nice result.”

Protecting bodies and boats is vital. “Absolutely there will be some rust and safety concerns from some competitors who do not practice enough after such a long hiatus,” Holmberg said. “We will definitely sail with an extra level of awareness whenever in close proximity with other boats.”

Rust aside, teams are working hard to get ready. “Our ground crew works all night,” Fauth said, describing their nocturnal efforts to ensure that Bella Mente is always competitive. “It’s a 24-hour program. But if you do this, it’s what you need to do to race in all conditions and keep Bella on the water.”