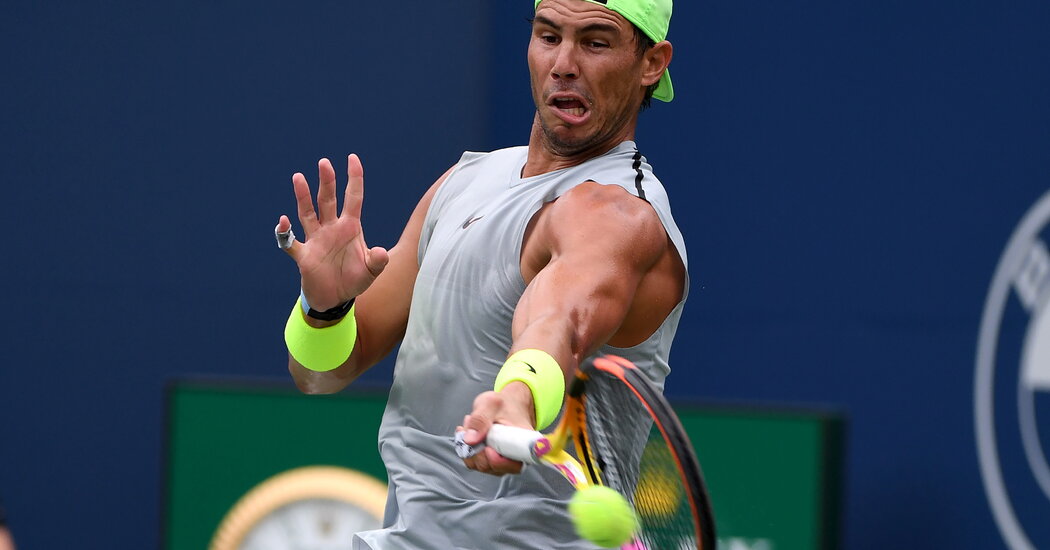 As the tennis tours warm up for the U.S. Open in the summer heat of North America, the sport’s most accomplished players will arrive in New York cold.

The five active players with the most Grand Slam singles titles to their names — Serena Williams, Roger Federer, Rafael Nadal, Novak Djokovic and Venus Williams — are missing from both this week’s National Bank Open in Toronto and Montreal, and next week’s Western & Southern Open in the Cincinnati suburbs. The veterans have all played selective schedules this year, but their wholesale absence from the warm-up to the year’s final major tournament, which begins on Aug. 30, is striking.

Djokovic, 34, was the only one of the group to compete at the Tokyo Olympics, while Federer, Nadal, and Serena Williams opted out, and Venus Williams’s singles ranking of 112 did not qualify her for the Olympics.

Djokovic, who will attempt in New York to become the first man to win all four Grand Slam singles titles in the calendar year since 1969, blamed his withdrawal from Cincinnati on fatigue.

“I am taking a bit longer to recover and recuperate after quite a taxing journey from Australia to Tokyo,” Djokovic, the Western & Southern defending champion, said. “Sadly, that means I won’t be ready to compete in Cincinnati this year so I’ll turn my focus and attention to U.S. Open and spend some more time with family. See you in New York soon!”

Nadal, 35, is the only one of the group to have played a warm-up event in North America. After withdrawing from both Wimbledon and the Olympics with a left foot injury, he played two matches at the Citi Open in Washington, beating Jack Sock before losing to the 50th-ranked Lloyd Harris.

Nadal, who has a longstanding foot problem because his navicular bone did not correctly ossify during childhood, was upbeat about his progress after his loss to Harris.

“Best news: the foot was better than yesterday,” Nadal said last week. “I was able to move a bit better, so that is very important, especially for me personally, to keep enjoying the sport and keep having energy, believing that important things are possible.”

But after further practices in Washington and Toronto, Nadal withdrew from the National Bank Open on Tuesday.

“I was suffering, especially in that first match,” Nadal said Tuesday of his play in Washington. “And I was suffering on the practices, too. But you always expect an improvement or you hope to improve, and that’s why I came here. And this improvement didn’t happen, no? So I really believe that I am not able to compete at the level that I need because the foot won’t allow me to move the way that I need.”

Federer, who turned 40 on Sunday, cited the knee injury that forced him out of the Olympics in withdrawing from Toronto and Cincinnati.

Serena Williams, who turns 40 next month, cited a leg injury on Tuesday in withdrawing from Cincinnati. Her WTA Tour ranking has fallen to 20th.

The men, however, have lacked similar transition moments at the sport’s biggest events. When Dominic Thiem won last year’s U.S. Open at 27, he did so without having to face any of the so-called Big Three. Nadal and Federer both missed the tournament, and Djokovic defaulted from his fourth-round match after hitting a lineswoman with a ball. Thiem has been out of competition since June when he suffered an acute right wrist injury at a tournament in Majorca. He posted on Instagram on Wednesday that he was “swapping the splint for my racket again.”

Asked about the absence of established stars in the wake of Nadal’s withdrawal, the third-ranked Stefanos Tsitsipas pointed out the problem’s upside.

“I think there is room for new stars,” Tsitsipas said after his second-round win in Toronto. “It’s been a lot about them in recent years, and I think now it’s showing that things are changing. We see a different generation of players stepping up and showing what they are capable of.

“It’s interesting to have this kind of variation and change of thrones, let’s call it,” Tsitsipas added. “It’s interesting for our game. We, ourselves, we have generated our own team of people and fans that support us, give us love, and are there for us in each single match following us.”

One fan seemed plenty excited for Tsitsipas in Toronto, begging “please touch me!” as he reached down toward him.

There was no physical contact, but the fan left satisfied. “He smiled at me! He literally smiled!”