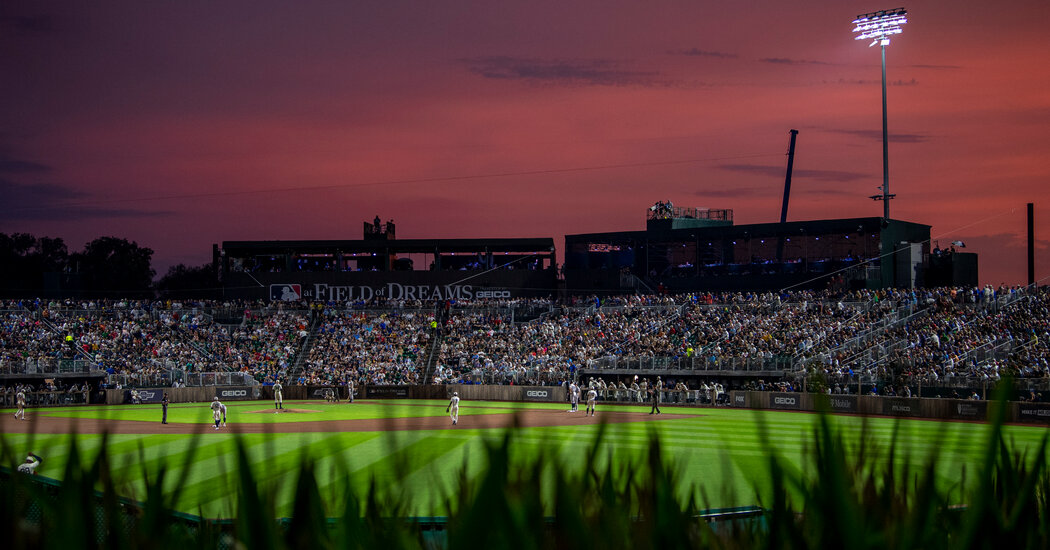 DYERSVILLE, Iowa — Their movie never felt like a surefire hit, not exactly. But what the caretakers of “Field of Dreams” have always had is a sense of duty, as if they were stewards of something precious. Kevin Costner felt that way when filming it here 33 years ago, and he felt it again before the live sequel, of sorts, on Thursday night.

“It’s nuanced, and it’s with love, you can see it,” Costner said. “I think ‘Field of Dreams,’ all the way through, from the movie to this moment, has had the benefit of people who are very careful.”

Yet for all the planning, all the cinematic flourishes Major League Baseball applied in staging an actual game at a new diamond carved from the same cornfields, reality could have intruded. A storm, a blowout, an injury.

In sports, you don’t know the script until the credits roll.

The film ended with a simple game of catch. The game, as it turned out, ended with a home run, by Tim Anderson of the Chicago White Sox. With one on and one out in the bottom of the ninth inning, he drove a fastball from the Yankees’ Zack Britton into deep right field. The ball disappeared into the corn beyond the fence, the White Sox won, 9-8, and fireworks exploded over Dyersville.

Anderson, 28, was born in Alabama four years after “Field of Dreams” was released. He is Black, so he never could have played in the segregated majors of 1919, when gamblers bribed some of the White Sox to lose the World Series to Cincinnati. Costner’s character, Ray Kinsella, builds the field as a haven for the damned, but lots of other old-timers (all white) also show up to play.

Anderson’s wife has seen the movie, he said, but he never has. Would he watch it now, as the star of its revival?

“I might, I don’t know,” he said, smiling. “But I gave everybody a memory tonight, definitely. To leave a mark is a great accomplishment for me and I’m thankful for that moment, for sure.”

The White Sox have won the World Series just once since the banishment of Shoeless Joe Jackson and seven others, but they hope to claim another this fall: they are 20 games over .500, the runaway leaders in the American League Central. Costner introduced them on Thursday as the “first place” White Sox; he called their opponents “the mighty Yankees.”

The Yankees do not hold a playoff spot now, but they were, in fact, plenty mighty on Thursday. Aaron Judge smoked two homers, Brett Gardner ripped another, and Giancarlo Stanton — who took batting practice with souvenir ears of corn in his back pockets — lashed one to left for a go-ahead, two-run shot with two outs in the ninth.

It wasn’t enough, though, because the White Sox beat the Yankees at their own game: Jose Abreu, Eloy Jimenez and Seby Zavala went deep off starter Andrew Heaney before Anderson’s finishing blow. The ghosts in the cornfields must have been ducking for cover.

They also might have been confused, and not just by the batting helmets, TV cameras and multicultural rosters of today. The Yankees struck out 14 times on Thursday, four more than Jackson’s season tally for 1919. Four pitchers worked in relief for the White Sox, matching their total from the 1919 World Series. Baseball may be a timeless game, but time has changed it.

For one night, anyway, nobody complained about those strikeouts and pitching changes. Both teams just seemed thrilled to be here; as soon as they arrived, they wanted to stick around.

“I know there’s a bunch of guys wishing that we could stay here for a couple of nights,” Judge said. “Just because it’s so peaceful — getting a chance to get out of the city, stay in the country and see all this corn we’ve got out here.”

The players cut a path through that corn to explore the movie site before batting practice. Britton said he marveled that the stalks were even taller than Judge, who is 6-foot-7. Liam Hendriks, Chicago’s closer, roamed the little white farmhouse from the film and made sure to sit on the porch swing.

The players were eager tourists, even as they were a collective curiosity on their bus ride from the airport in Dubuque.

“There’s something majestic about it,” said Aaron Boone, the Yankees’ manager. “It’s cool, right? You see the people outside their homes with their banners and signs, having lunch and waving with their phones out. Them videoing us, us videoing them. That was really neat.”

Boone has broadcast or managed several M.L.B. excursions that also counted: games at a military base in Fort Bragg, N.C.; in Williamsport, Pa., home of the Little League World Series; and in London with the Yankees in 2019. This event was received so warmly, Commissioner Rob Manfred said, that the league would stage another game here in 2022.

“You never mess with a winning streak,” Costner said, seated next to Manfred at a news conference. “It does seem like all the teams will want to touch this.”

Even in defeat, Boone said he could recognize the power of the setting.

“That was as special and breathtaking a setting for a baseball game that I can ever remember being a part of,” said Boone, a third-generation major leaguer. “When we walked out through the cornfields and saw the stadium, just the perfection of the night, with Kevin Costner standing out there in short center field, that’s a moment I’ll remember for the rest of my life.”

Anderson, though, had the best reason of all to remember. He did not need to see the movie to make magic.

“The fans came to see a show,” Anderson said, “and we gave them a show tonight.”

As he left the podium after his interview, Anderson met with officials from the Hall of Fame in Cooperstown, N.Y. He brought a gift for them that seemed most appropriate: his spikes.