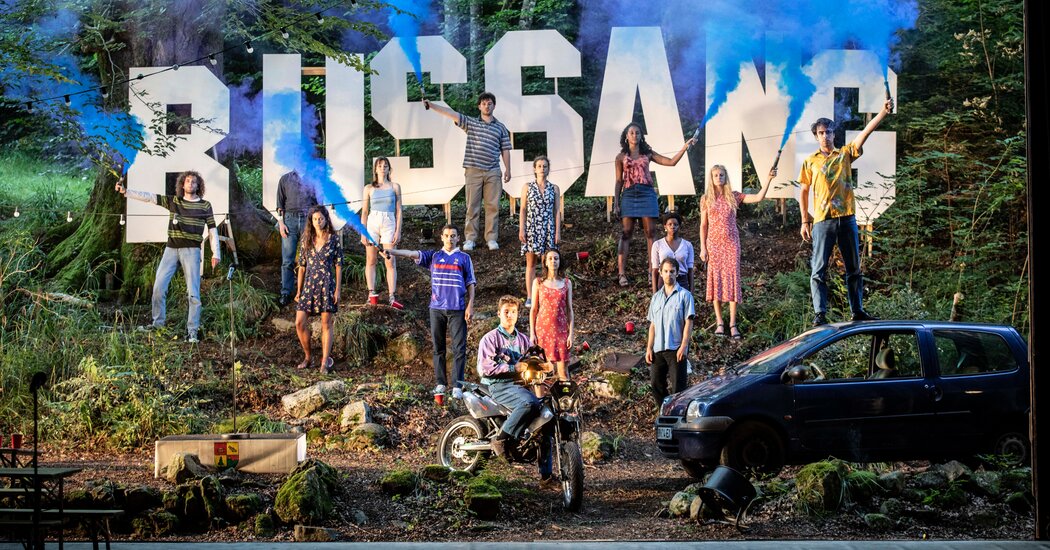 BUSSANG, France — Hundreds of productions have been performed at the Théâtre du Peuple, a 126-year-old playhouse in this village 45 miles from the border with Germany. Yet no matter how good the actors, they are often upstaged by the theater’s unusual backdrop: a steep forest, visible right behind the stage.

Framed like a painting by a wooden wall, the view brings nature into the proceedings — and visitors can’t get enough of it. This summer, two hours into “And Their Children After Them,” a new production by Simon Delétang, the otherwise plain set was lifted to reveal the trees beyond. The scene drew oohs and aahs from the audience, followed by spontaneous applause.

This indoor-outdoor setup in the Vosges Mountains has sustained the Théâtre du Peuple (or People’s Theater) through many incarnations. Founded in 1895 by the playwright and director Maurice Pottecher, who was inspired by visits to Richard Wagner’s Festspielhaus in Bayreuth, Germany, it became known as a pioneering example outside Paris of “popular theater,” drawing audiences from all social backgrounds. Decades before the postwar push by the French government to decentralize a cultural scene concentrated in the capital, Pottecher convinced local workers to attend his plays and perform in them.

While amateurs are still cast in one production every year, professional actors have long since taken over most roles, and the Théâtre du Peuple now sits on a curious artistic fence. On the one hand, its founder, nicknamed Le Padre, lingers in the background — literally, since he is buried in the theater’s garden with his wife, the actress Camille de Saint-Maurice. His motto, “Through art, for Humanity,” still adorns the proscenium arch.

On the other hand, Pottecher’s own plays — which formed the bulk of the repertoire from 1895 to his death in 1960, and had a strong moralistic streak — have long since fallen out of fashion. “Every director arrives thinking it would be great to perform Pottecher again, but when you read him, it’s not possible: It’s dated,” Delétang said in an interview in Bussang.

Instead, artistic directors are appointed for four-year terms by the Association of the Théâtre du Peuple, a local governing body, and given free rein. Delétang, who co-directed a small theater in Lyon, Les Ateliers, from 2008 to 2012, had no professional experience in Bussang when he was appointed four years ago. His contract was recently renewed through 2025.

The current season, which runs through Saturday, suggests Pottecher’s legacy now lies mainly in the experience of attending the Théâtre du Peuple, rather than in the shows themselves. Before a recent performance of “And Their Children After Them,” locals could be found picnicking in the theater’s garden, a longstanding tradition, with Delétang and the show’s actors tending the bar and making themselves available for a chat.

In that sense, Bussang is a forebear to the generation of rural festivals, like the Nouveau Théâtre Populaire, that have sprung up around France over the past decade and emphasize approachability.

The programming of those events couldn’t be more different, however. While newer events have favored collective decision-making and diversity, the Théâtre du Peuple only just welcomed its first female director, Anne-Laure Liégeois, for a staging of Ibsen’s “Peer Gynt” in July. Onstage, Bussang’s productions are also slicker and more aligned with the standards of publicly funded French playhouses — leafy backdrop aside. “And Their Children After Them” and “Our Need for Consolation Is Insatiable,” the two productions on offer in August, could have fit right into the lineups of a number of highbrow Parisian theaters.

“Our Need for Consolation Is Insatiable” started life last year as a response to the pandemic. After the Théâtre du Peuple’s 2020 season was canceled, Delétang directed and performed this 40-minute show, based on an autobiographical essay by the Swedish writer Stig Dagerman, as a compensation of sorts. Billed as an “electro-rock oratorio,” it was first shown here last summer, outdoors, with live music by the band Fergessen.

Perhaps it shouldn’t have transferred to the main stage, though, where it lands awkwardly. Dagerman’s meditation on life and depression, written in 1951, comes across as profoundly self-involved in the Théâtre du Peuple’s interpretation. Smartly dressed, his feet planted shoulder width apart throughout, Delétang seems to embody a dandy’s despair rather than any larger malaise.

It doesn’t help that Dagerman returns time and again in his essay to the naïve notion of complete freedom from society’s shackles as the ultimate “liberation.” Last year, that could conceivably have been understood as channeling the desire for a release from lockdowns. Public debate in France has moved on; this summer, it has been focused on whether or not vaccine passport mandates infringe on personal freedom, and in that context, Delétang’s ode to self-determination took on an entirely new meaning — an unfortunate coincidence, since the season was programmed months ago.

“And Their Children After Them” adheres more closely to Pottecher’s humanist ideal. The play is based on a Goncourt Prize-winning novel by Nicolas Mathieu, who grew up in the Vosges region. Like the book, Delétang’s production follows a group of friends in the 1990s, in a rural part of eastern France increasingly left behind by deindustrialization.

Although it opens with Nirvana’s 1992 hit “Smells Like Teen Spirit” and ends with France’s landmark victory at the 1998 soccer World Cup, the stage version of “And Their Children After Them” often leaves the historical context aside to focus on the horniness of teenagers. Anthony, the main character, is desperate to attend parties and sleep with girls, who in turn grapple with their own sexuality.

Delétang designed the production for the graduating class of a renowned Lyon drama school, the ENSATT, and provided everyone with a chance to shine. Very few scenes are acted out in a conventional sense. Instead, the 13 actors take turns narrating the story and loosely playing the main characters. To indicate a kiss, for instance, two actors describe it to the audience without touching each other, merely closing their eyes to signal pleasure.

It proves a smart directing choice to avoid extensive nudity and any problematic gender dynamics, and the young cast takes to Mathieu’s text with a solid sense of rhythm. The downside is a lack of movement over three hours, as Delétang’s static posture in “Our Need for Consolation Is Insatiable” is replicated here by every performer.

Counterintuitively, given how often the teenagers from Mathieu’s novel find themselves in the woods, Delétang also opts to open the Théâtre du Peuple’s back wall only at the very end, when the characters are reunited at a city fair. Is it entertaining, at that point, to see a motorbike drive out of the forest into view? Yes. Are there better ways to use the Théâtre du Peuple’s surroundings? Probably. All the more reason to return to Bussang.