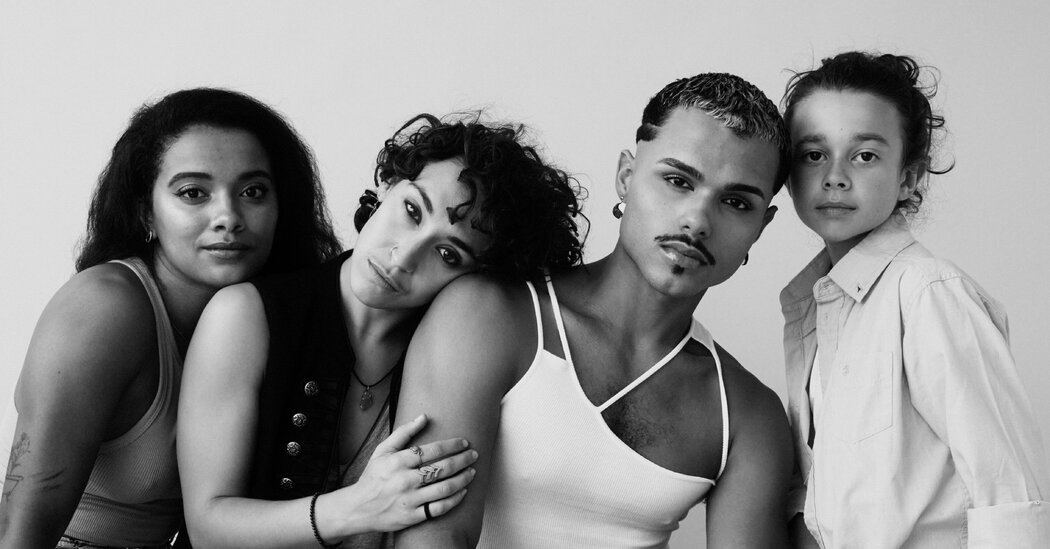 No one but her puppy, Alfie, was with Ayla Ciccone-Burton when she heard the good news from her agent.

“I got up at the dog park in front of all these people that I don’t know,” she said. “I’m just running around, full screaming, telling my dog that I’m going to be on Broadway.”

“He didn’t care,” she added, and laughed an effervescent laugh. She loves him anyway.

Like most performers, Ciccone-Burton won’t be playing a starring role in her show. She’ll be singing and dancing in the ensemble — and making her Broadway debut.

She and three other supporting performers, all scheduled for Broadway bows this fall, talked recently about what that means to them, and what they discovered about themselves and the industry when for such a long time it was all snatched away.

Atticus Ware is 13 now, but he was 11 when he was cast in the new musical “Flying Over Sunset,” in 2019. Since Broadway shut down, he has done a lot of worrying that he might physically outgrow his role as the young Archie Leach, a.k.a. Cary Grant.

“You know, you can’t really do anything about it,” Ware said one morning in August, just back from summer camp. “So it was very stressful. But I am much more relieved now. And I’m almost certainly going to be able to do it.”

“Because, I mean, you never know,” he said. “I could hit a giant growth spurt in the next few months, or my voice could drop.”

Written by Tom Kitt, Michael Korie and James Lapine, who is also directing, “Flying Over Sunset” is a fantasy about Cary Grant, Clare Boothe Luce and Aldous Huxley on a 1950s Hollywood acid trip. With a cast led by Tony Yazbeck, Carmen Cusack and Harry Hadden-Paton, it was hours from its first preview when the industry froze.

“I first heard about the pandemic like a week before that,” recalled Ware, who since being cast has split his time between North Carolina, where his mother and siblings live, and New Jersey, where his father lives. “When it hit, I cried. I cried a lot. It was rough.”

The youngest of three children in a family of vegans, Ware started dancing at 4 and doing musical theater at 6. His brief bio is filled with credits from Charlotte, N.C., stages. He has been home-schooled for most of his life, and some of that education has always been online, but when things shut down, his dance classes went virtual, too.

“It really lifted my spirits when I started to be able to do in-person dance classes again,” he said. “That was just really helpful with my mental state.”

“Flying Over Sunset” is choreographed by the tap sensation Michelle Dorrance, and she has taught him a lot, including how to combine speed with precision. But there is also this, he said: “She’s very kind.”

The company, now slated to start performances in November, spent some of its limbo time gathering on Zoom for themed parties with games and cocktails. Ware occasionally had a mocktail to match.

“My mom, I honestly don’t know how she did it, but she made like nonalcoholic gin,” he said, and laughed. “I usually just grab LaCroix.”

On the August day when her pandemic-paused career revived at last, Ayla Ciccone-Burton called her mother twice in tears.

In the morning, she wept because after a year of working as a nanny, she really, really didn’t want to do it anymore.

By midday, though, she was sobbing with joy, because she’d just been cast in the ensemble of her first Broadway show. When “Tina: The Tina Turner Musical” opens back up in October, she will play an Ikette.

“It means everything,” said Ciccone-Burton, 26, a bubbly and thoughtful actor-singer-dancer who was in Auckland, New Zealand, on tour with “The Book of Mormon,” when live performances stopped.

In her dreams of Broadway’s comeback, she had envisioned herself as an eager audience member, and hoped she would have the money to catch an opening night.

“And now I’m going to be onstage for one of those opening nights? Like, reopenings?” she said. “I just don’t even have the words.”

Growing up in Niagara Falls, N.Y., Ciccone-Burton threw herself into theater, singing and competitive dance. When her high school did “Willy Wonka,” she played Violet Beauregarde.

But by the time graduation came, in 2013, the future in performance that she had aimed for as a child seemed impractical, especially since the B.F.A. programs she auditioned for turned her down.

Taking a cue from her mother, a high school science teacher, she became a biology major at SUNY Fredonia and went on hiatus from performing.

“I would say my freshman year of college was one of my saddest years,” she said.

It took a while — and ditching that major — before she found her way back. But in 2017, her professional career began when she was cast as a dancer and understudy in a nonunion national tour of “Dirty Dancing.” Just before it ended, she got the job in “The Book of Mormon.”

She spent the first months of the pandemic back in Niagara Falls, where she streamed videos of Tony Awards shows from her childhood bedroom. When the Broadway Advocacy Coalition held online discussions of racism in the industry, she tuned in to those, too.

So it is particularly meaningful to her to join a mostly Black show led by Adrienne Warren, a founder of the coalition. Ciccone-Burton said that growing up, and before “The Book of Mormon,” she was often a production’s “token Black artist.”

“To be in this show where it’s the majority, and the people in that majority are trying to actively make change in the Broadway world, in the community?” she said. “Yeah, that feels really good.”

“Priscilla, Queen of the Desert” whisked Tomás Matos off to Europe in 2016. Matos, who is nonbinary, was just out of Fiorello H. LaGuardia High School — known as the “Fame” school — when they were cast in the musical for Norwegian Cruise Line.

Setting out on Sundays from Barcelona, the ship sailed around the Mediterranean. Matos shopped for months in Italian, French and Spanish ports.

“I left with one paycheck,” they said, “but I also came back with an entire European wardrobe. The clothes there are iconic.”

Cheeky and funny and full of their own glamour, Matos was in previews with “Diana: The Musical” when Broadway went dark. Since the production won’t officially open until Nov. 17 — after a filmed version, shot during the shutdown, makes its premiere on Netflix on Oct. 1 — Matos’s official Broadway debut is on hold until then, too.

Cast in the show in 2018, when it was en route to Broadway, Matos is part of the ensemble and has a small featured role, doing a duet with Diana.

“There is a lot of dancing and singing and going full-out, and then standing in the back as palace staff right after,” Matos said. “And letting the sweat drip down my face while Queen Elizabeth is singing a ballad.”

At 23, they have been dancing since sixth grade at I.S. 61 on Staten Island, where the teacher — Danielle McNally, who gets a thank you in Matos’s Playbill bio — said that whoever did the best plié would get a lollipop.

“I damn well got that damn lollipop,” Matos said.

Matos, who for a while during the pandemic was making and selling empanadas from home with their grandmother, considers shooting the film “Fire Island” this summer a personal pandemic highlight. Its stars include Bowen Yang of “Saturday Night Live,” where Matos was a backup dancer for Lil Nas X in May.

“Another highlight, I became sober,” said Matos, who now uses both he and they as pronouns, having also embraced a nonbinary identity in the pandemic.

“It’s something that took a lot of thought and a lot of panic attacks, trying to really come to terms with my gender identity and how nonconforming it is,” they said. “And I feel really, really happy that I can kind of put a pronoun to how I’ve always felt.”

At midnight on Jan. 1, 2020, Yael “YaYa” Reich was onstage in the Phish show at Madison Square Garden, one of a few dozen dancers costumed like clones of the band. It was a crazy-perfect start to what so many people knew in their bones was going to be a stupendous year.

For Reich, 28, it certainly looked that way. In February, she successfully auditioned for “Hadestown,” the reigning Tony Award winner for best musical. Cast as a swing — a performer who learns multiple ensemble roles and must be ready to leap in as the understudy for any of them — she was just three days into rehearsals, with one other person who was joining the show, when Broadway suspended operations.

Last month, as the production geared up for its Sept. 2 return, rehearsals involved the whole company: a bit of a shock to Reich’s system after a long stretch of introspection and solitude.

“I’ve been on my own for most of the pandemic,” she said. “I actually drove out West and did a whole solo van trip. It was incredibly soul-searching and beautiful and expansive and difficult. But it has been a lot, coming back into a room full of people.”

“The fact that it’s these people,” she added, “is kind of the only way I would want to do this right now.”

Reich, who is nonbinary, grew up in Seminole, Fla., doing children’s theater with her younger sister from the time they were small.

“I basically flew out of the womb singing and dancing,” she said.

In high school at the Pinellas County Center for the Arts, and later at the University of Florida, she majored in musical theater. After graduating college in 2015, she toured with “Mamma Mia!” for two years, then with “Rent” and “Evita.”

The shutdown gave her the chance to slow down and step back. While she has dreamed her whole life of being on Broadway, she sees it as “a huge milestone” along the journey, not the destination.

“If I’ve learned anything from the pandemic,” she said, “it’s that my dreams expand further and wider and deeper than one entity, one institution, one industry.”