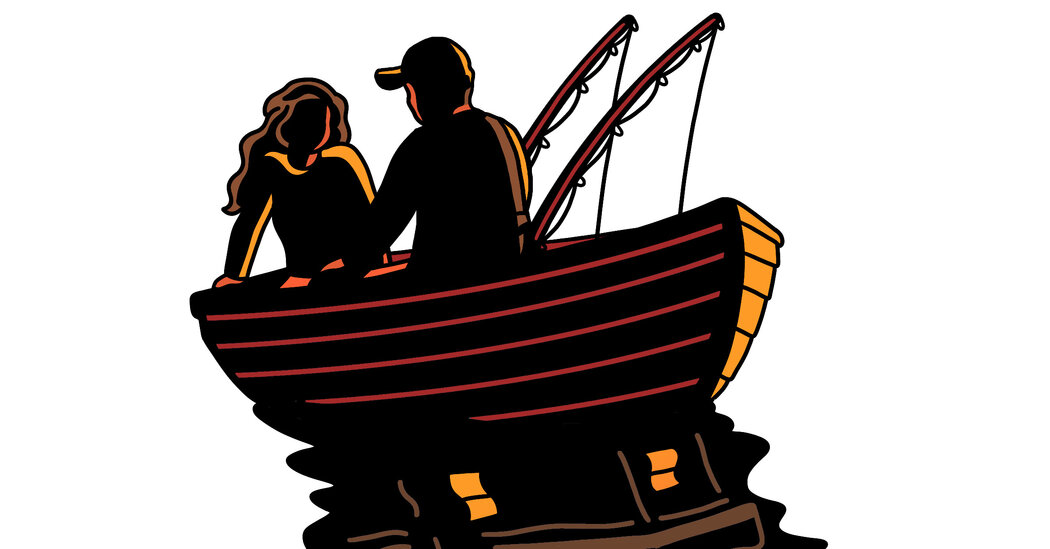 THE GUIDE
By Peter Heller

Peter Heller’s thrillers unfurl like campfire yarns relayed second- or thirdhand, his drifting narratives peppered with question marks and qualifiers. The result is an aw-shucks sort of earnestness in many of his characters. Jack, the plain-spoken protagonist of Heller’s new novel, “The Guide,” is described as “compact, broad-shouldered, strung together with maybe baling wire”; his love interest, Alison, has “creases at the corners of her eyes and an air of someone in the habit of pursuing truth.” The latter attribute proves especially fortuitous given the pair’s curious run-ins at the Colorado fishing resort where the book takes place.

A sequel to “The River” (2019), “The Guide” evokes a near future in which coronavirus variants have pushed America’s leisure class westward in search of open space and outdoor recreation. Hired as a seasonal river guide at Kingfisher Lodge, Jack leads fly-fishing expeditions for well-heeled clients such as Alison, a famous country singer. As Jack and Alison’s outings grow more intimate, they encounter mounting evidence — trigger-happy security guards, staffers gone AWOL and a sickly young woman fleeing the property in a hospital gown — suggesting an operation even fishier than the resort’s abundant brown trout.

If Heller shares anything with the Stegners and Harufs of the frontier-lit canon, it’s the scale of his landscapes. The scenery cascades in long, panoramic passages, whereas the human characters are rendered in quick glances. When Jack hooks a trout, he elates with a gusto bordering on the sexual: “It was sleek this brown, all muscle, and the flash of gold as it hit the air was better than any treasure, God. He ran and fought the fish. Ten minutes, 20? Who knew? He lost track of time, and of himself.” Heller’s conservationist streak is evident in the way he writes the novel’s villains, a gang of vulgar capitalists plundering nature with the aid of assault rifles and tricked-out pickups. In the book’s finale, the violators are met with an Old Testament wrath, a revenge fantasy bloody enough to make John Rambo blush.

Flat dialogue and implausible plot elements doom “The Guide” as a piece of literature, but it’s the perspective that defangs it as a thriller. The pseudo-omniscient narrator is clued into the lodge’s secrets long before Jack and Alison, leaving the couple to stumble through obvious twists and telegraphing climactic reveals. For such a placid suspense novel, “The Guide” lacks the interior monologue that a more limited point-of-view would bestow. Jack is, by turns, an Ivy League golden boy, blue-collar simpleton, shellshocked survivor and bloodthirsty vigilante, inviolable save for his inexplicable mood swings; without insight into his doubts and fears, there’s never any reason to believe he won’t save the day. Where Jack is a cipher, the vantage elevates Alison to virtual sainthood, identifiable only by her generosity and impeccable morals.

If this makes “The Guide” resemble a dopey summer blockbuster, perhaps that’s by design. In its current, highly variegated model, the vacation thriller is more companionable than immersive, an embellishment for weekend getaways rather than a stand-alone exercise. To that end, Heller’s unorthodox pacing feels deliberate: You can crack open “The Guide” at cocktail hour, read a few pages of his florid topographical depictions, and forget all about the hostage plot at the book’s core. Still, there’s a sense he’s reaching for something weightier. The real villains in Heller’s fiction aren’t the double agents and gun-toting mercenaries, they’re the extractive industries and insatiable culture imperiling his beloved western vistas. He’d be wise to try a format less impervious to his own argument.