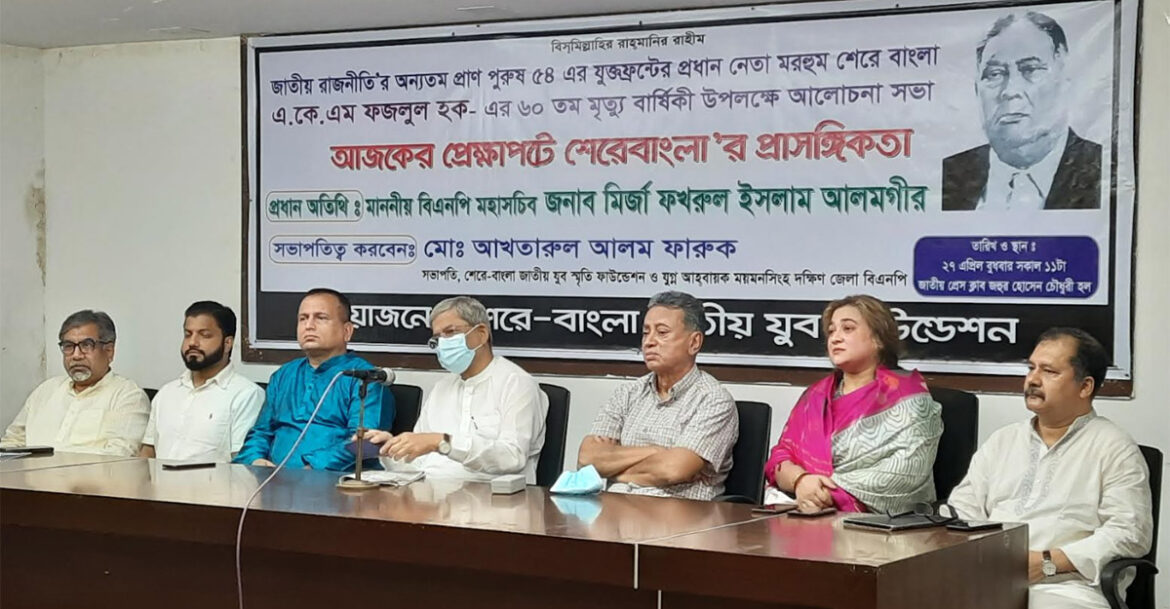 BNP secretary general Mirza Fakhrul Islam Alamgir has said that now there is no name or history in the textbook except for a leader. As a result, our little grandchildren who go to school know only one name. Doesn’t know anyone else’s name. Even those who are studying in colleges and universities now have reached the stage of forgetting the name of Fazlul Huq in Sher-e-Bangla.

He made the remarks at a discussion on the occasion of the 70th death anniversary of Sher-e-Bangla Fazlul Huq at Zahur Hossain Chowdhury Hall of the National Press Club on Wednesday (April 26).

The BNP secretary general said that the history of the whole of Bangladesh is being distorted today to bring forward only one family, one philosophy. The context was one leader one country, Bangabandhu’s Bangladesh. Mujibism has to be established and there will be nothing else. Everything that Bangladesh has has to be centered on that.

He said that terrible aggression has started on this nation. Historically, culturally, economically and politically. Aggression must be stopped because it is very important. The aggression of this government is omnipresent. On the one hand, history is distorting, it has completely destroyed the economy, on the other hand, it is moving towards one-party politics, removing democracy and moving towards fascism. The government is doing these things in a very planned manner. Not only is it a matter of staying in power but the government wants to establish it philosophically. And to do all this work has destroyed all the institutions of the country.

On the issue of clashes between businessmen and students in New Market, Mirza Fakhrul said that two people were killed in the clashes while the police had first arrested the BNP leaders and filed cases against them and remanded them. However, through all the media and social media, the terrorists of Chhatra League are mainly responsible for this incident.

Regarding the Kalabagan Tentultala playground, the BNP general secretary said that a police station is being set up by occupying the children’s football playground. There are innumerable such incidents, today people all over Bangladesh have no security anywhere. Instead, measures are being taken to further harass them.

During the discussion, BNP standing committee member Amir Khasru Mahmud Chowdhury said that when politicians write history, it is not history but propaganda. Historians have to compose history. Because they write history on some basic subject. Today only one history is being written, the history of a group, a family is being written. They have lost the true milestone in the history of Bangladesh since independence. So today such a great hero like AKM Fazlul Huq is not remembered.