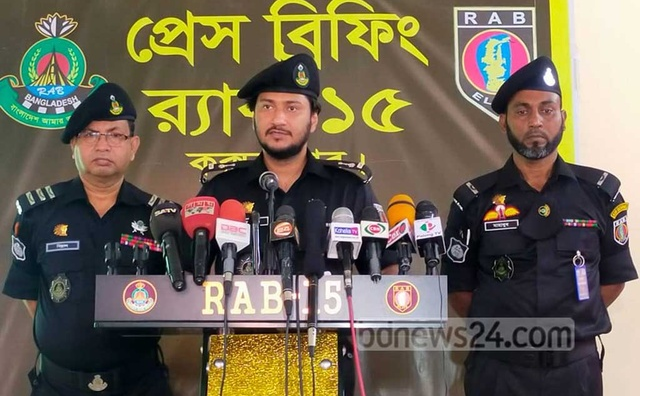 RAB has arrested the younger brother, who was granted bail by the High Court in the name of his elder brother Alauddin, accused in a human trafficking case in Ramu upazila of Cox’s Bazar.

It was further informed at a press conference held at the battalion office at noon that the elder brother of the teenager Alauddin (25) is currently in jail in a case of attempted murder. Their home is in a village in Chakmarkul union of Ramu upazila.

Kishore was 12 years old when he stood in the High Court on bail for his elder brother in October 2019. The court also granted him bail considering the child.

Major Manzur Mehedi Islam said that on October 29, 2016, the victim Nurul Islam filed a human trafficking case against Alauddin and six others in the Cox’s Bazar court. The court issued an arrest warrant against Alauddin.

One year later, on October 26, 2019, the teenager applied for bail in a bench of the High Court. The court granted him bail. The report was published in the newspaper.

It was informed at the press conference that after getting bail, Alauddin along with his accomplices attacked the plaintiff in the case Nurul Islam, Mohammad Rafiq of Paschim Shah Ahmed Para of Chakmarkul Union on April 23, 2021. Rafiq was seriously injured in the attack.

Rafiq then filed a case of attempted murder against the accused including Alauddin at Ramu police station. A month ago, Alauddin was arrested and sent to jail in that case. He is currently lodged in Cox’s Bazar Jail.

After that Alauddin’s younger brother went into hiding. He was under surveillance. He has been arrested since morning.