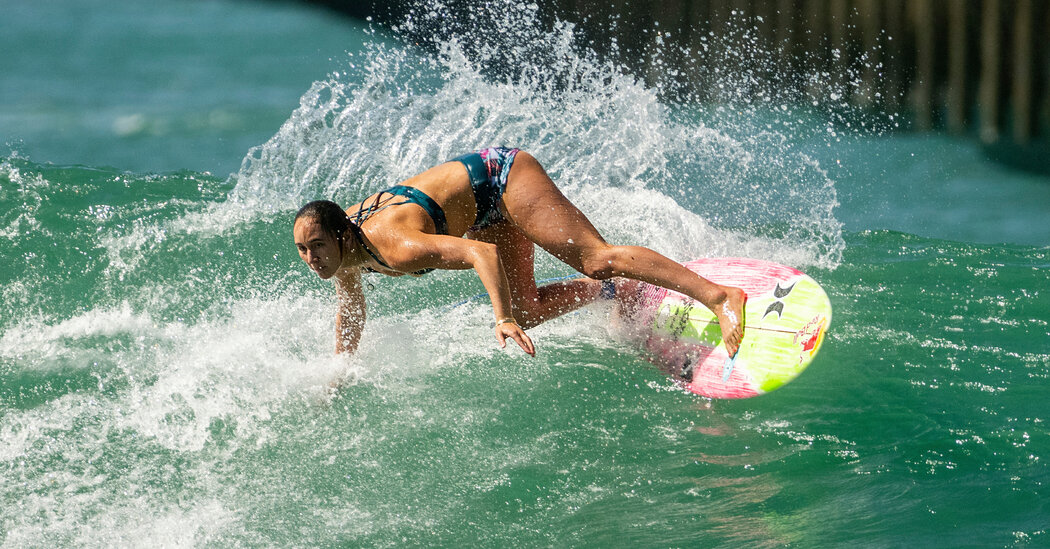 SAN CLEMENTE, Calif. — The vibe on the pier was predictably mellow, even with 10 of the world’s best surfers gathered.

The morning’s low clouds had not burned off yet. Couples nibbled breakfast on the deck of Fisherman’s restaurant. Fishermen dangled lines into the Pacific Ocean below. Seagulls lingered in the stainless steel sinks where the catch is gutted and cleaned.

Near the end of the San Clemente Pier, surfers like Carissa Moore and Gabriel Medina milled about in flip-flops and caps bearing sponsors’ logos. They were summoned to help promote a new era in professional surfing.

Surfing works hard to project a carefree attitude. But there is a persistent churn around the business of professional surfing, a decades-long undercurrent to the culture.

It is the indefatigable belief that there are more fans to hook and more money to be made.

That is why the World Surf League is operating this year with a jolt of urgency. Under new leadership, it hopes to ride a swell from surfing’s Olympic debut in Tokyo while overhauling its schedule and, most notably, the way it crowns champions.

The championship tour season used to end in December on the North Shore of Oahu, usually with dramatic barrel-shaped waves but often without suspense. Surfers, building points at events around the world all year, sometimes arrived in Hawaii having already clinched a world title.

Now the season will end in September — this time at Lower Trestles, off a bulge in the coastline at the southern end of San Clemente — with a one-day surf-off among the top five men and the top five women.

The idea is to build a playoff atmosphere, a singular event to stamp into the minds of would-be fans and the media outlets that they follow.

The exact day of this year’s event is uncertain (the unpredictability of waves is among competitive surfing’s charms and aggravations) but it appears most likely to happen Monday or Tuesday.

Surfers will navigate a unique bracket. The top-ranked surfers, Moore and Medina, have byes all the way to a best-of-three-heats final. The route for others depends on season rankings. The fourth- and fifth-ranked surfers, for example, would have to win three matches against three competitors to reach the final.

The one-day format is not universally loved. Even the top surfers question what is happening.

“I don’t like it because I don’t think it’s fair,” said Medina, a two-time world champion from Brazil who has accumulated such a huge points lead this season that he likely would have been named the world champion by now under the previous format. Instead, he must win two of three heats to claim it.

“You spend your life, a year long, and now the last event in September, you’re gonna decide all your year?” he said.

“I don’t know about business, I don’t know how it works,” Medina said. “They tried to do something different.”

What the W.S.L. wants is focused intrigue. Only in rare instances — including Italo Ferreira’s victory over Medina at the 2019 Pipe Masters — has the season title come down to the final heat of the final event.

Australia’s Stephanie Gilmore, a seven-time world champion seeded fourth in the finals, had reservations about the new setup, too. But she recalled clinching most of her titles while standing on the beach, when would-be challengers lost in heats.

The new format not only gives her a chance at an eighth title, but puts surfers into head-to-head heats with everything at stake.

“As an athlete, you just really dream to be able to win in that kind of situation,” Gilmore said.

It is not a new idea. Organizers of other individual sports, like the PGA Tour and NASCAR, have engineered playoff-style events to concoct season-ending punch.

But surfing is different. Or is it? It has long been awash with cosmic questions facing many outdoor pursuits these days: Is it a lifestyle or a global sport? Can (or should) it be both?

Even as surf culture — music, fashion, vernacular — has permeated so many facets of society, all over the world, the sport works to brand itself as anti-establishment. As with riding a wave, it is not cool to look to be trying too hard.

Professional surfing’s success has ebbed and flowed for decades. The 1976 inception of the International Professional Surfers gave structure to a collection of contests. The Association of Surfing Professionals, founded in 1983, solidified a world tour behind surf-centric brands like Rip Curl, Billabong and Quicksilver.

Sponsors and some surf brands faded away, some into bankruptcy, leaving pro surfing in constant search for stability.

About a decade ago, an investor group, led by a couple of surfing-industry executives, came to the rescue, then got a steadying infusion from billionaire Dirk Ziff.

Things have moved quickly in the past six years. The Association of Surfing Professionals rebuilt and rebranded itself into the W.S.L. in 2015. Wave-pool technology added intrigue and visions of the elusive perfect wave. In 2018, the W.S.L. announced equal prize money for men and women. The W.S.L.’s two defending champions, Moore and Ferreira, won gold medals at the first Olympic surfing competition this summer.

Behind the scenes, the W.S.L. has drifted from being mostly a contest organizer. In 2019, it hired Erik Logan, the president of the Oprah Winfrey Network and executive vice president at Harpo Studios, to be president of content, media and studios.

He helped create the ABC reality show “The Ultimate Surfer” and the HBO documentary series “24/7: Kelly Slater.” This W.S.L. season will be part of an upcoming, six-part Apple TV series, modeled on Netflix’s “Formula 1: Drive to Survive.”

In 2020, Logan was promoted to chief executive, shortly before the pandemic shut down the season. That gave Logan and the league a chance to reimagine the tour. It flipped the Hawaiian stops from the end of the season to the start. It combined the men’s and women’s tours, which often had separate events.

And it devised a season-ending championship event.

“The opportunity to win it in the water, in the arena, is a really unique opportunity in surfing that really hasn’t happened,” Logan said. “We were very blessed in 2019 to see that with Italo and Gabe at Pipeline, and just the intensity of that was really codifying for a conversation that already had been going on.”

The tangible impact of all the changes, including any bounce from the Olympics, is hard to discern. The W.S.L. streams its tour events on its website and on YouTube, and said that the average audience size is 7 percent higher in 2021 than in 2019, with a 20 percent rise in total hours consumed.

In San Clemente, Logan, 50, wore sunglasses, a trim beard, faded jeans and clean Vans. He embodies the balance of the ambitious pursuit of building a global sport with a sense of laid-back chill, not unlike the sport he governs.

Afterward, the surfers gone and the clouds breaking, he stood alone on the pier. To the south, past a school of surfers at T Street, a classic San Clemente surf break, was the shoreline jut of Trestles Beach.

The idea is to move the finals each year, the way the Super Bowl or most golf majors rotate locations. September, the W.S.L. said, is a good month for waves at a variety of global surf spots.

But Lower Trestles, a popular tour stop for years, made sense for the inaugural event. It is in Southern California, the economic home of surfing, close to sponsors and media companies, surfers and their fans. And it has room for thousands of people, with dependable waves relatively close to the beach.

That should provide just what the W.S.L. wants — images of top surfers, big waves, excited fans and trophies held aloft, all beamed live to viewers around the world, the highlights exponentially replayed by media, both traditional and social.

He might want to explain that all to Medina.