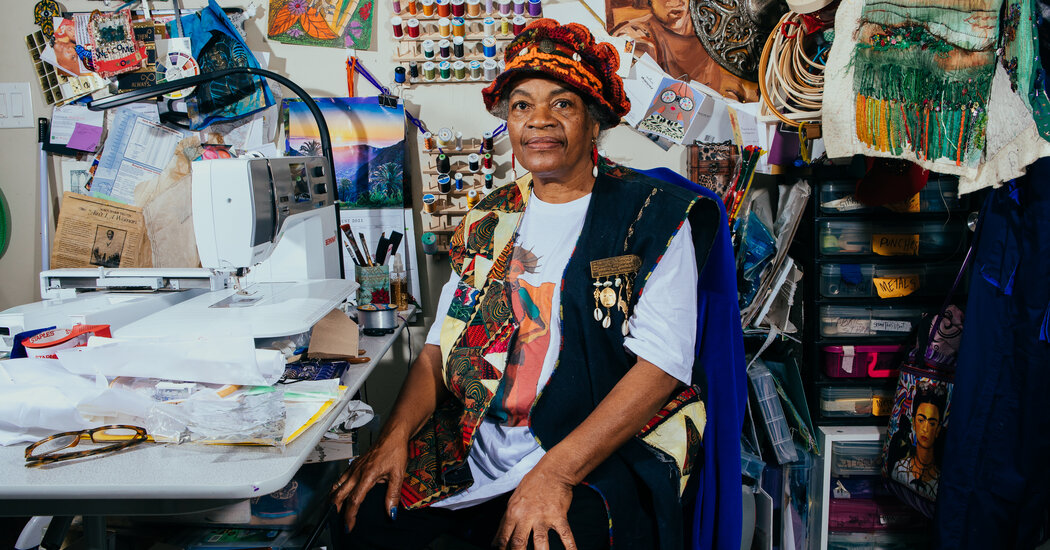 PHILADELPHIA — The moment you walk through Dindga McCannon’s purple front door, you enter her artistic world. There’s patterned fabric everywhere: covering the windows and furniture, hanging in the form of quilts, clothing and batiks. Her paintings occupy the walls too, and boxes of prints are stashed under the TV. Any free space seems to be a potential spot for art.

For more than five decades, McCannon has been making work rooted in who she is: an African American woman and third-generation Harlemite (although she lives in Philadelphia now). She has a longstanding reputation in Black and fiber art communities: in an interview, Michelle Bishop, the founder and director of the nonprofit Harlem Needle Arts called her “already famous.” But, as is the case with so many Black female artists, the white mainstream ignored her dazzling, hard-to-categorize assemblage quilts as well as her bright, figurative paintings and prints — until now. “I just kept making what was right for me,” said McCannon, who is both happy about and unfazed by her late-in-life success. “Eventually, the world catches up with you.”

This week, the artist, who recently turned 74, had a solo show open at Fridman Gallery that includes some 24 pieces and is accompanied by a catalog. This is the first time she has been represented by a commercial gallery, and the catalog is the first publication devoted to her art. (The gallery will also show her work at the Armory Show this week and at Art Basel Miami Beach in December.) For the occasions, she’s painting a mural in Beacon, N.Y., with her son, who is also an artist. Her first mural in at least a decade, it’s titled “Maybe if the mothers of the world unite we could all live in peace” and depicts five women of different races and ethnicities in an arc behind a sun. Thematically and visually, it harks back to “A United Community,” a six-story mural she designed in Bushwick, Brooklyn.

On the day I visited McCannon at home, a large, unfinished canvas dealing with the reality of being an old Black woman lay flat on a table in her living room. Beyond it stood a rare sculpture: “Blues Queens,” a pillar of shimmering portraits of female blues singers. They were sewn into deep blue fabric that, at the base, branched into golden strips, like the fringes of a flapper dress splayed on the ground.

“This is my pièce de résistance,” McCannon said. Its antecedent was a self-described “gaudy” piece she made about Ma Rainey roughly a decade ago. In discussing it, she recalled a stop on a trip to Africa, where, she said, “at 6 o’clock in the morning, the women get up, they are dressed in glitter and sparkles and shiny stuff.” Returning to Harlem, “I went to 125th Street and saw a lady dressed in a lime green two-piece suit,” McCannon recalled. “She was probably in her 80s. I said, see? This is part of who you are.”

McCannon’s work is richly saturated with patterns and colors, but her figures often have a reserved quality, as if they were guarding their private selves. Her most frequent subjects are Black women, and the sights and scenes of Black life. “She was doing her work within a community that she saw as vitally important and needing a voice, that she very much saw herself as part of,” said Catherine Morris, the senior curator for the Elizabeth A. Sackler Center for Feminist Art at the Brooklyn Museum, which owns several of McCannon’s works. “She’s never diverged from that.”

McCannon played a vital role in the Black Arts Movement of the 1960s and ’70s, as one of only two female members of the influential Weusi Artist Collective and a co-founder of the trailblazing group Where We At Black Women Artists, Inc. But she was never at the center of the male-dominated scene, partly because she was a woman and dared to make art about it.

“A lot of guys didn’t like the work that she was doing,” said Gylbert Coker, a member of Where We At alongside McCannon. “Her work was through the eyes of a woman. Her aesthetic was female — and it wasn’t sweet and fluffy. It was just, this is what a woman does; this is how a woman is.”

What’s more, after starting out with paintings and prints, McCannon found her way to fabric: first clothing, which she calls “wearable art,” and then fiber art, a form she has stretched to encompass myriad other media. “When we think of fabric and textile, some may think [of a] one-layered quilt or certain types of patterns,” Bishop said. “Her scope and imagination and creativity go far beyond that. That’s the excellence of her work.”

Until recently, textile arts were mostly shut out of the fine-art world because of their association with “women’s work” — something McCannon learned about as a child. “Back in the day, you did not have a choice,” she said. “You had to learn to cook, clean and do needlework.” The goals were practical: to prepare girls to become wives and sometimes, to earn money. McCannon and her grandmother made aprons and sold them at church.

When, around age 10, she told her family she wanted to be an artist, they neither understood nor approved. “There was no precedent that anyone could relate to,” she explained. “All they thought was that I was going to starve — which wasn’t quite far from the truth.”

McCannon’s compromise was to attend high school for fashion design. After graduation, she got her first gig at a school in Harlem. One day in 1964, the director told her he’d seen artists showing their work on the fence of a nearby housing project. She went over and joined the group, called Twentieth Century Art Creators, which split soon afterward. McCannon went with the Afrocentric faction, Weusi Artist Collective.

The men in Weusi (Swahili for blackness) taught the 17-year-old McCannon practical skills, like how to stretch a canvas. They also got her her first solo show, at a coffee shop. She attended night school at City College. In workshops, she encountered teachers who gave students a hard time about painting Black figures. Her refuge was the Art Students League, where she studied with Jacob Lawrence, Charles Alston and Richard Mayhew, important Black artists from a previous generation.

Even as McCannon made her place in the New York art world, she found it lonely. She had two children, but once she did, her life as an artist became more complicated. “Back then, most men had nothing to do with child-rearing,” she said, “which meant that you got to work, be a housewife, and be a parent. And then you got to find time to be in the studio.”

Her solution to the housewife problem was to avoid becoming one. “I’m a bad wife,” she said with a laugh. “Because the primary force in my life is my art, and it’s hard for another human being to deal with that.”

Still, trying to balance personal responsibilities while confronting the double bind of racism and sexism was difficult. In 1971, McCannon and the artists Faith Ringgold and Kay Brown, began discussing their struggles. They decided to call every Black woman artist they knew in the city and invite them to gather. After the meeting, the group mounted a show of the members’ work at a gallery in Greenwich Village. Titled “‘Where We At’ Black Women Artists: 1971,” it was one of the earliest exhibitions of its kind. The collective grew from there, becoming a nonprofit and lasting for 28 years.

Where We At fostered community as a creative outlet and a day-to-day lifeline for its members, who helped one another with babysitting and even covering rent. “I probably wouldn’t have made it to this point without that type of support,” McCannon said. “It was like the sisters I never had.” She celebrated one of them, Akweke Singho, in Matisse-inspired colors in the painting “Empress Akweke” (1975), which the Brooklyn Museum acquired in 2012 and displayed in the 2017 exhibition “We Wanted a Revolution: Black Radical Women, 1965–85.” That show introduced new generations to Where We At and helped catalyze a shift that has brought McCannon greater attention.

For this artist, who never courted the mainstream, the biggest change has been financial. Her whole life, she asked herself, “How are you going to keep things going?” Answers included teaching art in jails and shelters; painting murals; illustrating and writing children’s books; and traveling cross-country to attend fairs where she sold her work.

Now, at last, she doesn’t need to hustle. In January 2020, one of McCannon’s older paintings sold for $161,000 at Swann auction house — “you could have bowled me over with a feather,” she said — and at the end of the year, Phillips held a private selling exhibition of her recent paintings and quilts. Both events suggested a market for her work that she hadn’t known was there.

The success has also allowed her to rent a studio outside her home for the first time since her son was a baby. Her basement serves as a different kind of studio: a space crammed with tables, machines (six or seven for sewing), and overflowing shelves, bins and piles of all manner of materials, including beads, dyes and fabrics. “I swear, I’m the woman that has everything, but it seems I always have to go out and get something else!” she said jokingly.

Art has been McCannon’s way of life, which means she’s had to be more practical than precious about it. “To me, art has always been a fluid situation,” she said — an idea that’s evident in every aspect of her practice, from her embrace of unusual materials to her willingness to revisit old ones. Her favorite piece is always the one she just finished. “As artists, you never stop growing, you never stop learning, you never stop experimenting, you never stop doing,” she mused. “I will probably never have a set style. It’ll be sort of like me, but I can take it anywhere I choose.”