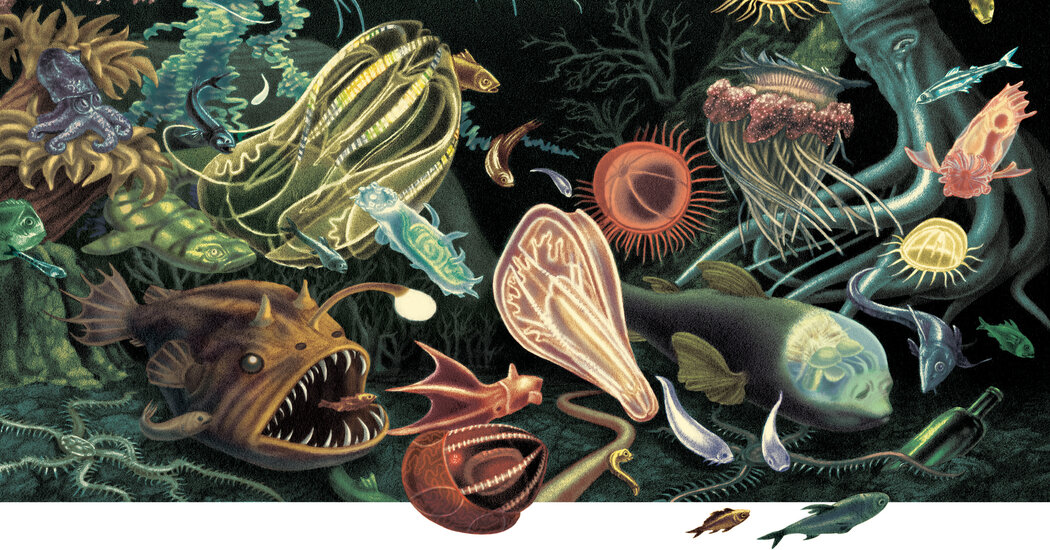 The deep sea that Scales portrays is a largely unseen realm that is continually being plundered, often by people who have little notion of what they are destroying. Between the two writers, Scales is the more graceful storyteller, but Widder has (by far) the more compelling story to tell. Indeed, Scales’s conceit — of traveling aboard a research vessel for a couple of weeks in the Gulf of Mexico — feels a bit thin, and not just by comparison to Widder’s heroics. She never physically ventures into the abyss, as Widder did, and as a fellow science writer, James Nestor, did in his excellent 2014 book, “Deep.” (In one nape-tingling chapter, he describes traveling to a depth of 2,500 feet in “a homemade, unlicensed submarine” cobbled together by a New Jersey eccentric.) But for its shortcomings, “The Brilliant Abyss” has many virtues. Scales’s great gift is for transmuting our awe at the wonders of the deep sea into a kind of quiet rage that they could soon be no more.

In one of the book’s most appalling chapters, she describes the sad fate of the orange roughy, a remarkably slow-growing, deep-dwelling fish. Formerly known as the slimehead, the species was rebranded in the 1970s to better appeal to consumers. Demand spiked, and a “gold rush mentality” ensued. Trawl nets were dragged along the seafloor, hauling up not just roughies, but also the wreckage of coral reefs — “millennia-old, animal-grown forests” — which were tossed overboard as bycatch. Predictably, the fish population quickly collapsed, and they — and the ecosystems that were razed to catch them — have yet to return to their former vigor.

Scales excoriates not just the killers of the orange roughy, but the entire industry. Globally, she writes, deep-sea trawlers pull in profits of just $60 million a year, and yet they receive subsidies of $152 million. “If it costs so much, provides so little food, and reaps such huge ecological damage, the glaring question is, why trawl for fish in the deep at all?” Scales asks. Some have begun calling for a global ban on deep-sea trawling. Scales goes a step further. Looking into the future, where the mining of rare earth metals and the dumping of carbon in the deep sea promise to become lucrative (if destructive) industries, she urges us to err on the side of preservation: no deep-sea mining, fishing, oil drilling or extraction of any kind. The deep, she argues, is too vulnerable, and too crucial to the working of the planet to blindly ransack. (Among other things, the ocean acts as an enormous carbon sequestration device, one we are determinedly, if inadvertently, breaking.)

She concludes: “If industrialists and powerful states have their way, and the deep is opened up to them, then it raises the ironic and dismal prospect that the deep sea will become empty and lifeless, just as people once thought it was.”

Comparisons are often made between the deep sea and the cosmos. One obvious difference between the two is that the abyss below teems with life. Another is that, unlike the stars, the twinkling lights of the deep sea are hidden from view. “As soon as you stop thinking about it, the deep can so easily vanish out of mind,” Scales warns. She and Widder have worked hard to bring the abyss to light. It is our duty, as clumsy land-bound dwellers of a water planet, to look, and to remember.

Robert Moor is the author of “On Trails: An Exploration.”

BELOW THE EDGE OF DARKNESS A Memoir of Exploring Light and Life in the Deep Sea, By Edith Widder | 353 pp. Random House. $28.

THE BRILLIANT ABYSS Exploring the Majestic Hidden Life of the Deep Ocean, and the Looming Threat That Imperils It, By Helen Scales | 288 pp. Atlantic Monthly Press. $27.