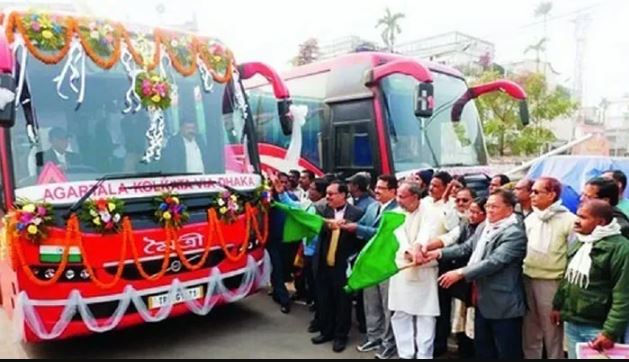 The bus was packed with passengers, the representative of the Tripura government for the inauguration was present from the mayor, the bureaucrat of the transport department to the assistant high commissioner of Bangladesh. The bus was also decorated with flower garlands. But the wheel of the bus did not turn! The Tripura-Dhaka-Kolkata bus journey has to be stopped at the last minute.

The first Agartala-Dhaka passenger bus service was started in 2003. In 2015, in collaboration with the Government of Bangladesh, buses started plying from Agartala to Dhaka via Kolkata. Due to the Corona epidemic, the passenger bus service on this route was stopped on March 13, 2020. On Thursday, TRTC announced the resumption of official passenger buses. According to that, about 16 passengers got on the bus this morning after buying tickets. On the occasion of resumption of international bus service between the two countries, TRTC organized a small program at Agartala Central Bus Terminal. The bus is decorated with flower garlands.

Assistant High Commissioner of Tripura Deputy Embassy Mohammad Arif, Mayor of Agartala Pur Corporation Deepak Majumder and Managing Director of TRTC Rajesh Kumar Das were present at the inauguration of the official bus journey. In addition, several high-ranking officials, including the secretary of the Tripura Transport Department, were present. But at the last minute, the Indian government did not send any official letter to the Bangladesh government regarding the resumption of passenger buses. As a result, no letter was sent to the Tripura government on behalf of the Bangladesh government. As a result, this bus service fell on its face before it started. In the end, the 18 passengers were reimbursed for the bus fare and arrangements were made to send them to their destination by alternative means.

Rajesh Kumar Das, managing director of TRTC, a state-owned transport agency of the Tripura state government, claimed that the resumption of international bus service on April 12 was approved by the state government. On the basis of that approval, they continued talks with the Bangladesh government. TRTC even arranged visas for associate members of the Royal Coach Bus Service approved by TRTC on the basis of a written application to the Indian High Commission. But the question arises as to the authority and role of the state government in approving international services.

Agartala Municipal Corporation Mayor Deepak Majumder, who practically supported the childish demand of the TRTC managing director, said the state government’s permission had been obtained. The Bangladesh government was contacted with that permission.

Mohammad Arif, Assistant High Commissioner of Tripura’s Embassy, ​​was in an embarrassing situation when the bus service was inaugurated on that day. “Look at our purpose, there was no shortage of our purpose,” he said. We were trying for the benefit of the people. There is a temporary problem, it will be resolved very soon.