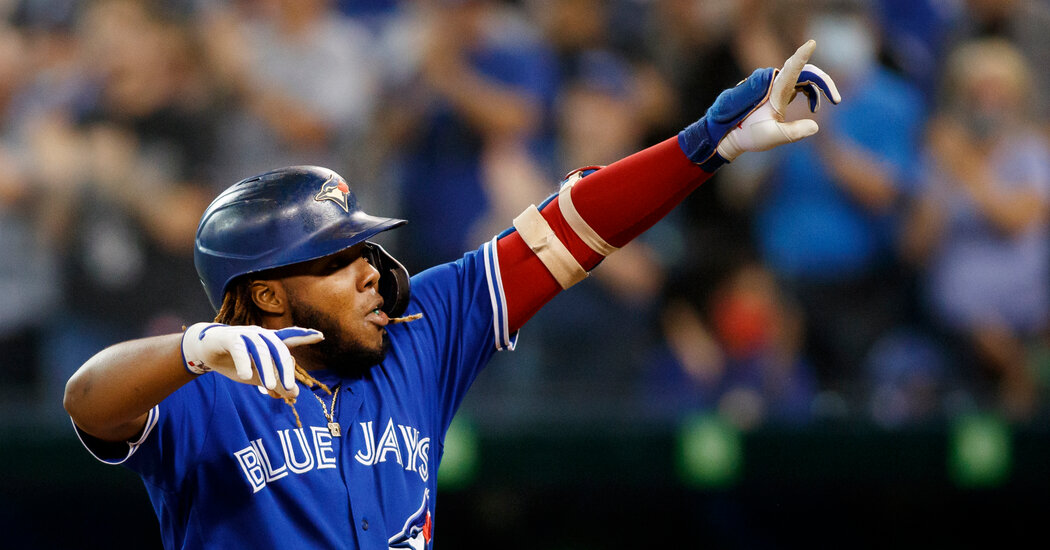 The ball came rocketing off Vladimir Guerrero Jr.’s bat at 114 miles an hour. It had an absurdly low 15-degree launch angle, and it landed just over the fence in left field, 356 feet from home plate. And with that — his 45th home run of the year — Guerrero moved into sole possession of the American League lead. One ahead of Shohei Ohtani.

With Guerrero leading the A.L. in batting average (.318) through Monday, and currently only four runs batted in behind the A.L.’s leader (103 to Jose Abreu’s 107), the 27th triple crown in major league history — including 10 from the Negro leagues — suddenly seems possible.

That would be the perfect cap to a year in which the slimmed-down Guerrero has realized his enormous potential, has his team positioned for its second straight postseason appearance, and has done it all even as the Toronto Blue Jays were forced to play a game of musical chairs for its home ballpark for much of the season. Yet despite his numbers, and his team’s achievements, Guerrero would have to be considered a sizable underdog to Ohtani, the Angels’ two-way sensation, in the race for the American League’s Most Valuable Player Award.

As hard as that might be to imagine, considering the reverence the triple crown continues to have, such a result in the voting has a fair amount of historical precedent. Just ask Ted Williams, who won the A.L. triple crown in both 1942 and 1947 only to finish second in M.V.P. voting both years.

This season, the voters could hardly go wrong.

Guerrero is playing for a top team and was leading the league in runs, hits, home runs, batting average, on-base percentage and slugging percentage through Monday. His 6.2 offensive wins above replacement is second in the majors to Philadelphia’s Bryce Harper, and he has the nice narrative of having been M.V.P. of this year’s All-Star Game.

Ohtani, though, is doing things no one has ever done. Unleashed from the limitations that had been placed on him in the past, he has slugged 44 home runs and stolen 23 bases, through Monday, and is 9-2 with a 3.36 E.R.A. as a pitcher. Unsurprisingly, he leads the majors in WAR at 7.7.

The last time such a debate happened, the voters got a bit sentimental, giving Miguel Cabrera of the Detroit Tigers the 2012 M.V.P. after he won the triple crown, even though Mike Trout of the Angels had a significant advantage in WAR thanks to his baserunning and defense.

Despite the notion in 2012 that a triple crown could not be ignored in the M.V.P. voting, the historical precedent says the opposite.

In 1942, Williams led the A.L. with a .356 average, 36 home runs and 137 R.B.I. He scored 141 runs and had a 1.147 on-base plus slugging percentage. In more modern terms, he had a major league-leading 10.5 WAR. Yet for the voters that year, second baseman Joe Gordon’s solid run for the first-place Yankees — though he trailed Williams in nearly every offensive category — was more important, and Gordon won the M.V.P. fairly easily.

That had to feel especially familiar for Williams, who also finished behind DiMaggio in the 1941 M.V.P. voting despite batting .406. To the voters in 1941, the math went like this:

The M.V.P.-less fate that befell Williams twice, and could happen for Guerrero this year, has other precedent as well. Lou Gehrig won the A.L. triple crown in 1934 and finished fifth in M.V.P. voting — he didn’t even place first among his teammates. In 1933, Chuck Klein of the Philadelphia Phillies won the N.L. triple crown but lost the M.V.P. to Carl Hubbell of the Giants. In 1912, Heinie Zimmerman of the Chicago Cubs captured the N.L. triple crown and finished tied for sixth in the M.V.P. voting, well behind the winner, Larry Doyle of the Giants.

In some of the other triple crown years, no M.V.P. was awarded. And in the case of the 10 triple crowns that Baseball Reference has recognized from the Negro leagues, no M.V.P. information is given.

As for 2021, the decision has very likely already been made by most voters. Either Ohtani or Guerrero would be a fine pick for M.V.P., but the historical oddity of Ohtani’s season is likely to tip the scale in his favor. A nice way to offset that potential frustration for Guerrero would be to have a nice long playoff run — something that has eluded both Ohtani and Trout so far in their careers, regardless of their greatness.