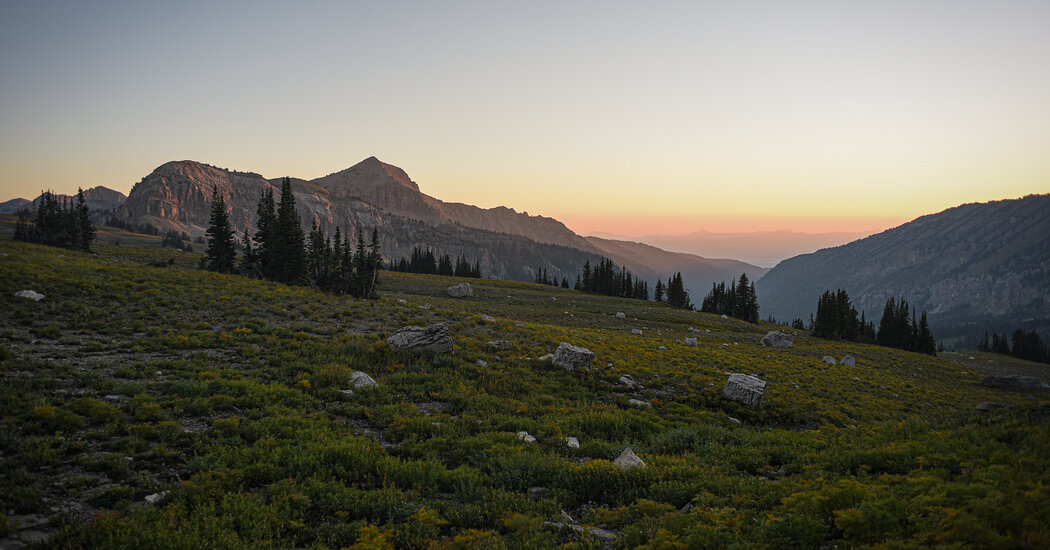 When I arrived at my first campsite in Wyoming’s Teton Range, some 17 miles from the trailhead, I fully expected to collapse into my sleeping bag. My feet ached, my shoulders were cramping from the weight of my pack and, despite having spent much of the day hiking above 9,000 feet, I had yet to fully adjust to the altitude. I quickly set up my tent, pried my boots off and climbed inside.

Instead of nodding off, though, I glanced out through the mesh screen and found myself entranced by the view: Framed in the distance — as if perfectly arranged in a picture window — was the imposing peak of Grand Teton, towering above the surrounding spires.

So began what felt like a nightlong play in five acts, with the Tetons occupying center stage: the clarity of early evening, the dusky glow of sunset, the gradual emergence of the Milky Way, a saturated set of predawn hues and, finally, crisp streaks of early-morning light.

A day earlier, I’d waded through overflowing parking lots and crowded boardwalks in Yellowstone National Park, edging my way to spectacular views of Grand Prismatic Spring and the geysers in Norris Basin.

But here in the backcountry, some 50 miles south, away from the popular hikes along John D. Rockefeller Jr. Memorial Parkway, the main thoroughfare that connects Yellowstone with the Teton Range, I was experiencing in near solitude what Rockefeller — who donated tens of thousands of acres to Grand Teton National Park — once described in a letter.

“The Teton Mountains are, to my way of thinking, quite the grandest and most spectacular mountains I have ever seen,” he wrote. “When viewed over the vast expanse of sagebrush which covers the valley, or with Jackson Lake and the marshes in the foreground, they present a picture of ever-changing beauty which is to me beyond compare.”

Most hikers complete the trail in four or five days, heeding the National Park Service’s advice to expect to travel no more than two miles per hour.

In early August, a friend and I endeavored to complete it in three days.

Permits are required for overnight stays in the backcountry of Grand Teton National Park, and securing campsites along the Teton Crest Trail is a competitive process. Having missed the window for advance reservations, we aimed instead for a first-come, first-serve permit, which entailed lining up at one of the park’s visitors centers on the day before the hike at 6 a.m. — two hours before the office opened. (I was first in line but still only received one of our two preferred sites, necessitating some slight tinkering with our hiking plans.)

There’s another option, though. Because the trail passes in and out of the national park, hikers looking to forgo the permit process can instead camp (for free) in the stretches of the trail that fall in Bridger-Teton and Caribou-Targhee National Forests.

If you’ve seen a photograph of the Tetons, which run north and south along the western edge of Wyoming, it was likely taken from one of the popular and easily accessible overlooks to the east of the mountains: Schwabacher Landing, Mormon Row, the Snake River Overlook, Oxbow Bend. Seen from an eastern vantage, Grand Teton, the tallest of the peaks, rises nearly a mile and a half above the adjacent plains. (The Tetons’ abrupt rise appears especially dramatic because of a lack of significant foothills.)

The Teton Crest Trail, on the other hand, offers hikers a look at the peaks from a western vantage — a view earned only by hiking up steep canyons or over a series of arduous passes. On this less trafficked side, the mountains offer up a greater variety of scenery, including the pristine isolation of Lake Solitude, scattered scree fields and the eerily barren landscape surrounding the 10,400-foot Hurricane Pass.

Relative solitude, of course, is one of the trail’s other draws. Grand Teton National Park welcomed 3.3 million visitors in 2020, claiming fifth place — ahead of Grand Canyon — on the list of the country’s most-visited national parks. Some parts of the park, including the once little-known Delta Lake, have been so inundated by ever-growing crowds that they’ve helped spawn campaigns against geo-tagging their locations in photos shared on social media.

Given its remoteness and the limits on available permits, the Teton Crest Trail, by contrast, is well insulated from the threat of overcrowding. As expected, we encountered only a handful of other hikers along the southern stretches of the trail. (We started at the Phillips Pass Trailhead, though some hikers opt to trim a few miles — and a few thousand feet in elevation gain — by taking a tram or a gondola up from Teton Village.) Only near the northern terminus of our route, in Paintbrush Canyon, which is popular with day hikers, did the trail begin to feel even remotely congested.

Fittingly, my hiking companion, Darius Nabors, and I enjoyed the most serene moment of the trip at Lake Solitude, which we reached just before sunrise on our third day. Sitting on a rocky peninsula that juts into the lake, we watched in silence as the sun rose above the enclosing peaks, gradually filling the basin around us with light.

By our back-of-the-envelope calculation, given that only a few campsites put the lake in reach of a reasonable hike before sunrise, it’s a scene that perhaps only a hundred people witness each year.

From Lake Solitude we climbed steadily for more than two miles — on a section of the path built in the 1930s by the Civilian Conservation Corps, a Depression-era government work program — to Paintbrush Divide, which, at 10,700 feet, marks the Teton Crest Trail’s highest point.

We paused and removed our packs to take in the breathtaking 360-degree views, reveling in the fact that the rest of the hike, to our endpoint at String Lake, would be almost entirely downhill.

Reflecting on the completion of the Skyline Trail — a precursor to the Teton Crest Trail — in 1933, Fritiof Fryxell, who served as Grand Teton National Park’s first naturalist, summarized its appeal. “In traversing this loop,” he wrote, “one completely encircles the Three Tetons and adjacent high peaks, viewing them from all sides. In this way one learns to know these peaks with an intimacy impossible to the visitor who contents himself with distant views.”

And it was true: As we drove south toward the town of Jackson, having completed the trail, and glanced to the west, catching sight of the Tetons from their distant and best-known angle, the peaks felt infinitely more familiar, infinitely more real — as if they’d finally emerged from the two-dimensional image that for years had been seared in my mind.