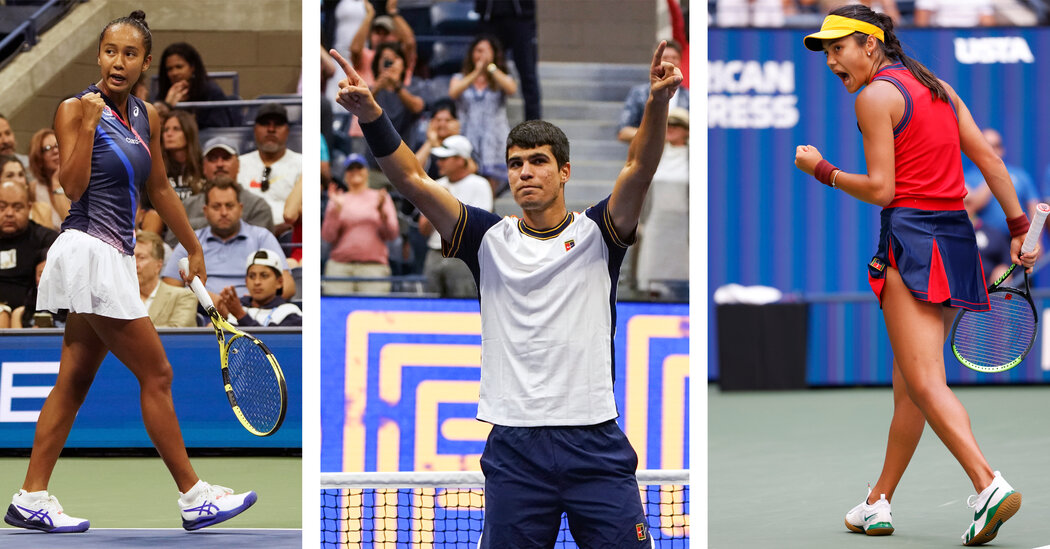 It has been quite a run for the teenagers at the U.S. Open, especially a bright-eyed and beguiling troika that has managed to turn the Billie Jean King National Tennis Center into its personal playground.

Like young stockbrokers who have yet to see a bear market, Emma Raducanu, Leylah Fernandez and Carlos Alcaraz are experiencing the best of tennis life: match after match of effusive crowds that chant their names and ask for selfies, passing shots that nick the back of the line, and the freedom of swinging their rackets on a stage where they cannot lose, because no one was counting on them to win in the first place.

And yet, they do not have to look far to see how quickly it can all go off the rails.

“Buckle up, it’s a long ride,” Shelby Rogers, the veteran American and Raducanu’s latest casualty, said Sunday when asked what advice she could offer the trio of teenagers for when their U.S. Open runs end.

Naomi Osaka had just emerged from her teens three years ago when she upset Serena Williams to win this tournament. Three years, three Grand Slam titles, nearly $20 million in prize money and tens of millions more in sponsorships later, Osaka’s tournament ended this time with a loss to Fernandez followed by a tearful announcement that she will take an indefinite leave from tennis. Iga Swiatek, the Polish star who won the 2020 French Open at 19 without losing a set, spent much of her upset loss Monday against Belinda Bencic of Switzerland screaming at her coach and the sports psychologist who travels with her.

By now it is accepted wisdom that tennis has a tendency to eat its young like few other sports. Managing life as a young star on the tennis tour is a physical and mental test that trips up nearly every player at some point, especially those who break through early and then are suddenly expected to compete at the highest level nearly every time they take the court.

A ranking and seeding system places a number next to their name, letting them and the world know in the starkest way who should win any given match. Guaranteed payments from sponsors can relieve the burden of playing for your next meal or plane ticket. However, those contracts are often laden with incentive bonuses for winning tournaments and climbing the rankings. There is an implicit understanding that the contract will, at best, be reduced and at worst not be renewed if players don’t maintain a certain level of proficiency.

The attention, from millions of fans but also from family, cuts both ways, sports psychologists say, especially in a sport that has so many parent coaches. Fernandez’s mother has had a front-row seat for her daughter’s upsets of Osaka and Angelique Kerber, the former world No. 1. She leaned over the rails and screamed when Fernandez prevailed on the biggest points. Success naturally brings that kind of enthusiasm but can also produce a fear that the love will vanish if the winning stops.

Fernandez’s father, Jorge, doubles as her coach. He is at home in Florida with her younger sister, she said, but he calls every day with a game plan for the next match, “just telling me what to do in the day before, and then he trusts in me and in my game, that I’m going to execute it as much as I can.”

They may not be exhibiting poise under pressure as much as they are playing without pressure, which allows them to swing freely without the fear of not living up to expectations.

“I think it’s just the young people” who can play this way, Kerber said Sunday after Fernandez bested her in three sets with blistering forehands and fearless serves at the corners of the service box. Kerber, 33, has won three Grand Slam titles and was ranked No. 1 as recently as 2017. For several years she has battled injuries, inconsistency and the idea that she should still be at the top of the sport.

“Playing completely without pressure, in this position, it’s impossible, but I wish,” she said.

Oddly, for much of the past decade, players, coaches and tennis officials generally accepted that the sport had moved beyond teenagers. Equipment that allowed for powerful shots from previously impossible angles extended points and matches, accentuating the importance of mature strength and conditioning to a degree that made it too hard for teenagers to compete at the top level of the game, especially on the men’s side.

Then Coco Gauff, the rising American, started winning matches at Wimbledon in 2019, when she was just 15. Now a collection of her physically advanced peers are making their mark.

Raducanu beat Rogers in her debut in Arthur Ashe Stadium on Monday. On Tuesday, Fernandez plays Elina Svitolina of Kazakhstan in the quarterfinals, while Alcaraz takes on Felix Auger-Aliassime of Canada.

Raducanu, who is in her first summer of playing top level competitions, impressed once again Monday. She dropped the first two games, then reeled off 11 of the next 12 games and won 6-2, 6-1, showing off her exquisite combination of graceful athleticism and smooth, lacing groundstrokes. She has lost a combined total of just four games in her last two matches. When Rogers’ last ball settled into the net, Raducanu dropped her racket, fell to her knees and covered her eyes in disbelief.

Martin Blackman, the general manager for player development at the United States Tennis Association, said in recent years the better, and more physically developed, older teenagers had begun to shun junior tournaments, instead cutting their teeth in low-level professional events, while still finding a balance between competition, training and rest.

“So they come in under the radar and then they emerge on the big stage,” he said.

There is nothing that can come close to guaranteeing that they will not succumb to the challenges of the game — being on the road for months on end, living up to rising expectations, and dealing with the inevitable losses and physical ailments.

“It is a perilous prospect,” said David Law, a tennis commentator for the BBC who previously worked for ATP, said Sunday as he settled in for Raducanu’s match. “It can go wrong. We’ve seen it go wrong.”

Law does not have to look far to be reminded of that. One of his BBC colleagues is Laura Robson, who at 18 made the fourth round of the U.S. Open in 2012 with wins over Kim Clijsters, one of the top players in the world, and Li Na, the Chinese star. She appeared on her way to greatness. Two years later she was battling a wrist injury from which she would never fully recover.

Frances Tiafoe, the 23-year-old American, spoke Sunday night after his fourth-round loss to Auger-Aliassime about his efforts to work his way back from the hype surrounding his quick rise into the top 50 in 2018, when he was seen as the savior of American men’s tennis.

“I thought I was just going to just keep going,” he said. “It doesn’t work like that. Same work you did to get up there, the same work you need to keep going, keep working harder.”

Despite the cautionary tales, it is nearly impossible not to be swept up in the excitement of watching new talent burst onto the scene at one of the biggest showcases in sports. It is a breathless experience that tennis has long thrived on.

Alcaraz, a Spaniard already burdened with the nickname “the Next Rafa,” a reference to his countryman, the 20-time Grand Slam winner Rafael Nadal, said he knows that he has become a subject of fascination back home over the past few days.

“I’m trying not to think about this,” he said Sunday after beating Peter Gojowczyk of Germany in the fourth round, his second consecutive five-set win. “Just focus on New York, on every day here.”

That is a good start, said Mary Carillo, the tennis commentator and former Grand Slam doubles champion. Carillo has seen tennis crack so many rising stars, from Andrea Jaeger, who tanked matches, to Mardy Fish, who battled anxiety and mental illness at the peak of his career. Her heart sinks every time she sees players checking their phones for what is being said about them on social media as soon as they walk off the court.

Survival, she said, comes down to the stuff we learn in kindergarten: Get enough sleep; don’t talk to strangers; don’t listen to what they say about you; stay away from bad people.

“You really better make sure you have the right people on your ball club,” Carillo said. “People who understand your values, your ambitions, how much you can take and most importantly when you need some time to step away.”