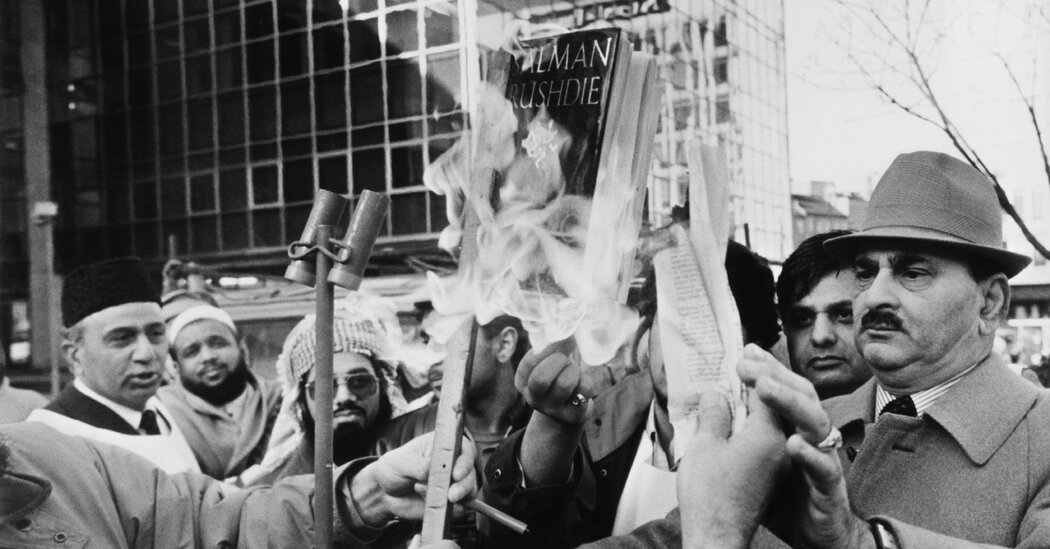 Two years ago Salman Rushdie joined prominent cultural figures signing an open letter decrying an increasingly “intolerant climate” and warning that the “free exchange of information and ideas, the lifeblood of a liberal society, is daily becoming more constricted.” It was a declaration of principles Mr. Rushdie had embodied since 1989, when a fatwa by Ayatollah Ruhollah Khomeini, the Supreme Leader of Iran, calling for his murder, made him a reluctant symbol of free speech.

The letter, published by Harper’s Magazine in June 2020 after racial justice protests swept the United States, drew a backlash, with some denouncing it as a reactionary display of thin-skinnedness and privilege — signed, as one critic put it, by “rich fools.”

The reaction dismayed Mr. Rushdie, but didn’t surprise him. “Put it like this: the kinds of people who stood up for me in the bad years might not do so now,” he told The Guardian in 2021. “The idea that being offended is a valid critique has gained a lot of traction.”

Last Friday, after Mr. Rushdie was stabbed roughly 10 times onstage at a literary event in western New York, many wondered if the fatwa handed down more than three decades ago in response to his novel “The Satanic Verses” had reached its gruesome, belated conclusion.

Writers swiftly denounced the attack, as did the leaders of Britain, France and the United States. But almost as quickly, the attack became the latest flash point in the roiling 21st-century debate over free speech, liberal values and “cancel culture.”

Speaking on BBC Newsnight on Friday, the British columnist Kenan Malik suggested that while Rushdie’s critics had “lost the battle,” they had “won the war.”

“The novel, ‘The Satanic Verses,’ continues to be published,” he said. But “the argument at the heart of their claim, that it is wrong to give offense to certain people, certain groups, certain religions, and so on, has become much more mainstream.”

“To a degree,” he said, “you could say that many societies have internalized the fatwa and introduced a form of self-censorship in the way we talk about each other.”

The American writer David Rieff suggested on Twitter that “The Satanic Verses” would run afoul of “sensitivity readers” if it were submitted to publishers today. “The author would be told that words are violence — just as the fatwa said,” he wrote.

When “The Satanic Verses” was published in 1988, the battle lines over free speech were not as neat as some may remember. The novel, which fictionalized elements of the life of the Prophet Muhammad with depictions that offended many Muslims and were labeled blasphemous by some, inspired sometimes violent protests around the world, including in India, where at least a dozen people were killed in 1989 after the police fired at Muslim demonstrators in Mumbai, where Mr. Rushdie had been born into a prosperous liberal Muslim family in 1947.

In the West, the defense of Mr. Rushdie was hardly universally robust. Former president Jimmy Carter, writing in The New York Times in 1989, denounced the fatwa but charged Rushdie with “vilifying” the Prophet Muhammad and “defaming” the Quran.

“While Rushdie’s First Amendment freedoms are important,” he wrote, “we have tended to promote him and his book with little acknowledgment that it is a direct insult to those millions of Moslems whose sacred beliefs have been violated and are suffering in restrained silence the added embarrassment of the Ayatollah’s irresponsibility.”

“Midnight’s Children” (1981). Salman Rushdie’s second novel, about modern India’s coming-of-age, received the Booker Prize, and became an international success. The story is told through the life of Saleem Sinai, born at the very moment of India’s independence.

“The Satanic Verses” (1988). With its satirical depictions of the Prophet Muhammad, Mr. Rushdie’s fourth novel, ignited a furor that reverberated globally. Ayatollah Ruhollah Khomeini, the supreme leader of Iran, found the book blasphemous and issued a fatwa, or religious edict, urging Muslims to kill the author. Subsequently, Mr. Rushdie went into hiding for years.

“Fury” (2001). Published after Mr. Rushdie moved to New York, this novel follows a doll maker named Malik who has recently arrived in the city after leaving his wife and child in London. Although Rushdie “inhabits his novels in all manner of guises and transformations, he has never been so literally present as in this one,” a Times reviewer wrote.

“Joseph Anton” (2012). This memoir relays Mr. Rushdie’s experiences after the fatwa was issued. The book takes its name from Mr. Rushdie’s alias while he was in hiding, an amalgamation of the names of favorite authors — Joseph Conrad and Anton Chekhov. The book also discusses Mr. Rushdie’s childhood (and particularly, his alcoholic father), his marriages and more.

The British writer Roald Dahl called Mr. Rushdie “a dangerous opportunist.” The British novelist John Berger suggested Mr. Rushdie withdraw the novel, lest it unleash “a unique 20th-century holy war” that would endanger bystanders who were “innocent of either writing or reading the book.”

At the same time, there were some defenses from the Muslim world. The Egyptian novelist Naguib Mahfouz found the book insulting, but signed a letter defending Mr. Rushdie’s right to publish. And in a 1991 article, the Syrian intellectual Sadiq Jalal al-Azm accused Western liberals of having a patronizing view of Muslims.

“Perhaps the deep seated and silent assumption in the West,” he wrote, “remains that Muslims are simply not worthy of serious dissidents, do not deserve them and are ultimately incapable of producing them.”

In 1990, Rushdie made a carefully worded statement of apology, in a futile attempt to have the fatwa lifted (a move he later regretted). In the years after the fatwa, Rushdie lived under tight security in London, as several of his translators and publishers were attacked, some fatally.

In 1998, after the Iranian government stated it no longer backed the fatwa, he moved to New York City, where he became a fixture in literary and social circles, popping up at parties, events and in the media (including a cameo on “Curb Your Enthusiasm,” where he counseled Larry David, who had also run afoul of the ayatollahs, on “fatwa sex”).

But as the fatwa (which was never officially rescinded) seemed to fade in significance, the conversation over free speech shifted, particularly in the United States. The notion that offensive speech is “violence” gained ground, as younger progressives increasingly critiqued the principle of free speech as too often providing cover for hate speech. “Free speech” became a rallying cry of conservatives, who used it as a weapon against liberals they accuse of wanting to censor opposing views.

Tensions over free speech were thrown into high relief in 2015, when the writers group PEN America decided to present an award for courage to the French satirical magazine Charlie Hebdo, which had continued publishing after French Muslim terrorists murdered 12 staff members in an attack on its offices.

Mr. Rushdie’s reaction to the protest was blunt. “I hope nobody ever comes after them,” he told The New York Times. (On Twitter, he called the six writers who withdrew, some of whom were good friends, an obscene name and labeled them “Six Authors in Search of a bit of Character.”)

After last week’s attack, many writers and world leaders rushed to express solidarity with Mr. Rushdie. President Emmanuel Macron of France hailed him as the embodiment of “freedom and the fight against obscurantism” against “the forces of hatred and barbarism.”

Hadi Matar, a 24-year-old New Jersey man, was arrested at the scene and charged with second-degree attempted murder and assault with a weapon. Law-enforcement officials have not publicly stated what motivated the attack, which Mr. Rushdie’s family said had left him with “life-changing injuries.”

But in literary circles, some observers saw a reticence in some quarters to name the specific forces that had long targeted Mr. Rushdie.

In an email, the writer Thomas Chatterton Williams, one of the organizers of the Harper’s letter, said he had been impressed by the response from many writers, if struck by the “comparatively muted response” from “many of the voices who have dominated conversations around justice and oppression since the summer of 2020.”

He wrote on Twitter after the attack on Friday: “Words are not violence. Violence is violence. That distinction must never be downplayed or forgotten, even on behalf of a group we deem oppressed.”

But some close to Mr. Rushdie expressed reluctance to immediately use the attack as fodder for highly-politicized polemics on free speech. In an interview, Hari Kunzru, a British-born novelist who said he had faced four separate court cases in India stemming from his participation at a public reading of “The Satanic Verses” in 2013, declined to comment on Mr. Rushdie’s role in shifting free speech debates.

He cited both the rawness of his emotions, and the way free speech has been “weaponized by people who don’t actually have a genuine commitment to it.”

Mr. Rushdie, for all his full-throatedness, “never wanted to be a symbol,” Mr. Kunzru said, citing “the horrible irony of this inventive, playful writer” being defined for many by “this dreadful, somber threat.”

The Mexican novelist Valeria Luiselli, another close friend of Mr. Rushdie, expressed dismay at how quickly the online conversation zoomed to politics — “though Salman would have been right there fighting,” she said, laughing, “and defending his points.”

Some who weighed in said the stakes are simply too high — and too personal. After the attack, Roya Hakakian, an Iranian American writer who in 2019 was warned by the Federal Bureau of Investigation that she had been targeted by Iran, took to Twitter on Saturday to assail what she said was a lack of swift condemnation from U.S. government officials.

(On Saturday, President Biden issued a statement denouncing the “vicious” attack and hailing Mr. Rushdie as a symbol of “essential, universal ideals.” It was followed on Sunday evening by a more sharply worded statement from Secretary of State Antony J. Blinken, the first from a U.S. government official to cite Iran.)

In an interview on Sunday, Ms. Hakakian, who came to the United States as a refugee in 1984, said that the heart of the Rushdie case is “being able to say that we, as writers, as novelists, as thinkers, can absolutely take on any issue we want in our works — and that includes Islam.”

But “nobody is saying that,” she said. Instead, “people are paying lip service to free speech.”

In his recent autobiographical novel “Homeland Elegies,” the American writer Ayad Akhtar reflects on the complex meanings of the “Satanic Verses” controversy for Muslim readers and writers, including himself.

In an email on Sunday, Mr. Akhtar, who is PEN America’s current president, said the attack on Mr. Rushdie is “a reminder that ‘harms’ of speech and the freedom of speech do not, cannot, hold equal claims on us.”

“While we may rightly acknowledge that speech can harm,” he said, “it’s in the terrible culmination of Salman’s dilemma that we see the paramount value, the absolute centrality of freedom of thought and the freedom to express that thought.”

For many, defending Mr. Rushdie and “The Satanic Verses” against his would-be assassins may be easy, Mr. Akhtar said. But the defense also “has to apply where we have less unanimity, where we are more implicated.”