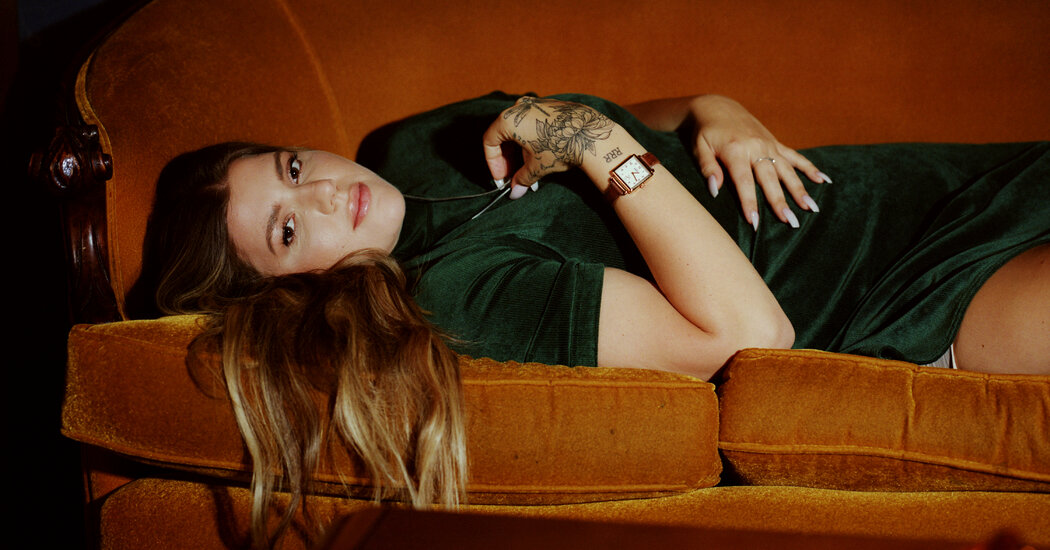 The singer and songwriter Yebba has a story she tells about the moment she realized she was fated to pursue a career in music.

It was the summer after her freshman year of college, and she was working at a warehouse, taking apart laptops. She’d started posting clips of her singing to Instagram, and they were beginning to get traction around the internet. One day after work, she was jogging alongside a bean field near her childhood home in Arkansas, and thinking about what the future might entail, when it happened.

In a recent video interview, she was reflexively self-aware about how this might sound. “I’m just going to put it in the way that I know how to say it, because I don’t really talk in churchy language as much anymore,” she said, her eyes wandering around her room before making direct contact. “But I really did feel the Lord say, from my stomach, ‘I do want you to be a singer.’ And I had this moment where I just stopped running, and I sat down and prayed, just laying in the dirt.”

What followed was not unique among singers who’ve broken out in the digital era. Virality brought surprise attention from established stars like Missy Elliott and Timbaland, which led to invitations to collaborate with other established stars and move to New York, where dreams are made of, as the song goes. But what Yebba, now 26, did next is unusual: She didn’t rush out a debut album with a phalanx of young writers and producers. She waited.

After around five years of focusing on her mental health, navigating the pitfalls of the music industry and recording take after take until listening back to her singing was no longer what she called “very embarrassing,” she will release her debut LP, “Dawn,” on Friday. And the spiritual connection that guided Yebba to her career has helped her take her time, regardless of how many people have said “hurry up.”

“I just don’t give a damn,” she said of the expectations placed on her as her career has slowly taken shape. Over two interviews Yebba spoke with consideration and purpose, often pausing for several seconds to collect a thought. Occasionally, she would tear up when the conversation turned serious, only to crack a joke a moment later. At one point, she showed off some of the art hanging in her Chelsea apartment: an abstract painting by the artist Shawn Shrum, and a green print she jokingly brushed off as “a basic bitch purchase from Anthropologie.”

“They can’t haze me, because I didn’t sign up for a sorority,” she said. “But I did sign up to create things with other people’s money, and that’s all anybody can ask of me — that’s all I can ask of myself, is to hold true to what I’ve agreed to do so far. And the second I’m called to do something else, I’m gone.”

Mark Ronson, who produced “Dawn,” said Yebba is steadfast in her taste. “You’re never going to get a sound or a color or a tone past Yebba that she doesn’t like,” he said. “She put her trust in me, but only in the name of realizing her vision.”

Though Yebba has logged high-profile collaborations with artists like Ed Sheeran and Sam Smith — and an appearance on Drake’s latest album, “Certified Lover Boy” — “Dawn” doesn’t sound like the debut of a burgeoning pop sensation hopping onto trends. The album has a rich retro palette, draws deeply from jazz and R&B and is set in a dusky register that gives Yebba’s flexible voice room to roam. (On the cathartic “October Sky,” her melody lines gently float along before suddenly ascending in a burst of pyrotechnics.) The LP was inspired by D’Angelo’s “Voodoo,” one of Yebba’s artistic touch points, and recorded at Electric Lady Studios with several members of the “Voodoo” band.

“In my head I wish I was a rapper, but really I just write folk songs,” she said.

Yebba was born Abbey Smith in West Memphis, Ark. Her father was a preacher, and she grew up singing in the church, becoming a worship pastor by age 15. With fond exasperation, she relayed a story about her intermittent rebellions: “I would say that I want to quit, and he would say ‘Abigail, who’s your favorite singer?’ And I’d say, ‘Aretha Franklin.’ ‘And what did Aretha do before she became Aretha Franklin?’ ‘She sang in her daddy’s church.’”

Not long after her moment of divine intervention, Yebba dropped out of college and moved to New York, where she played a 2016 show for the events company SoFar Sounds and sang a hypnotic song called “My Mind.” When video of the performance was eventually uploaded to YouTube that December, it blew up bigger than she could have imagined. “That one song was such a moment of worship, instead of really performative — I felt like God’s presence was there,” she said.

But just a few weeks after the SoFar show, Yebba’s mother died by suicide. She went home to West Memphis, where she struggled with her feelings. “A lot of people around me encouraged me to ‘let it go’ — like, what the [expletive] does that mean?” she said. “All I have, as an artist, is a whole bunch of time to reflect.”

After “sitting at home in Arkansas, like a robot,” Yebba returned to New York, where she thought a lot about the next step of her nascent career. She sang for A Tribe Called Quest. She went to London to meet with potential labels. But nothing was appealing. More troubling was the realization that her mother’s death was perceived as potential content, in some rooms. At a Grammys event, she said one label head introduced her to another artist by saying, “Her mom just died by suicide, but it’s all good because she’ll be able to write really good songs out of it.”

In response, “I dropped my purse, and I ran out,” Yebba said, a look of transparent disbelief scrawled over her face. She needed more time.

A crucial turning point came in 2018, when she met Ronson as he was putting together collaborators for what would become his “Late Night Feelings” album. Ronson said their rapport was cemented on their second day together, when Yebba good-naturedly made fun of a jacket he’d worn, telling him he was “trying too hard.” (“When an artist has the talent and the warmth to back it up, I don’t mind,” he said of the dig.) Their sessions led to three songs on Ronson’s album, and the music that would eventually become “Dawn.”

Some of the tracks took years to complete. “October Sky,” initially written in the wake of her mother’s death, required around 300 vocal takes. “I felt like when I lost my mom, I felt like I had lost everything that meant anything to me before,” Yebba said. But over time, with Ronson’s support, the process eased. “All I Ever Wanted,” the final song written for the record, with stacks of harmonies and a glowing string arrangement, came together in just a few days.

The pianist James Francies, a friend of Yebba’s who plays on the album, said she took care to surround herself with the right people. “At any moment, she’s like ‘If this doesn’t feel right, I don’t want to do this,’” he said. “And I’ve always respected and loved that about her, because she’s always put the music first, and she’s always put her peace of mind first.”

The album was completed before the start of the pandemic, but Yebba decided to hold its release and prioritize her mental health. “I don’t want to glorify rock bottom, but I was sitting on my couch doing my daily routine of chain smoking cigarettes,” she said. “I was just like, ‘I can either be a professional cigarette smoker and a professional drinker, or I can be a professional singer.’ I don’t agree that artistry has to be miserable, because that’s against every single reason why I was bonded to the music.”

But after taking her time, she’s finally ready for the next step. The album’s title doesn’t just refer to the break of day; it was her mom’s name, too. “I feel like now I get to be 26, instead of always being so immersed in grief,” she said. “I no longer feel like my life is some chore that I haven’t completed — that my mom is hanging over my head. There are new ways to honor her.”