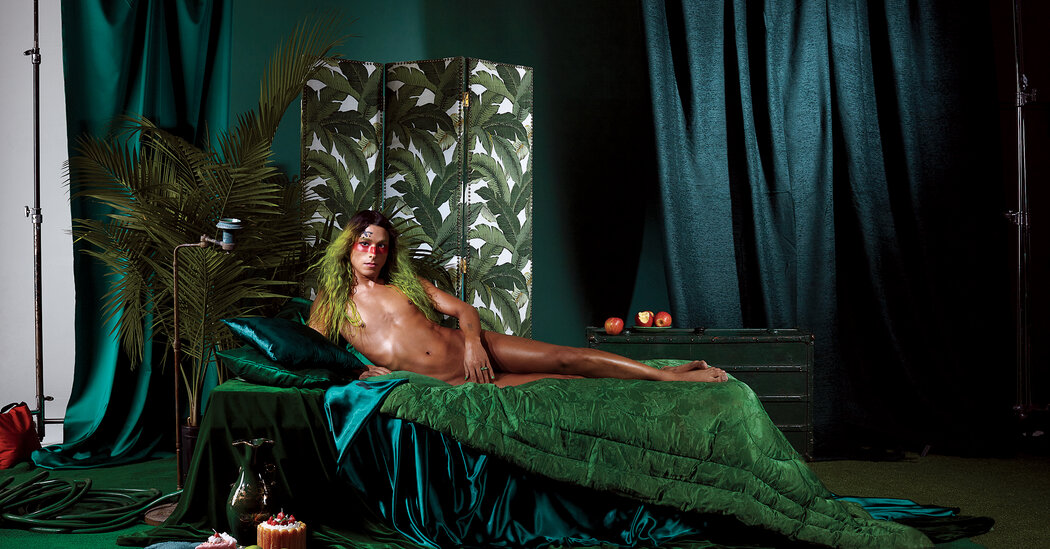 Lately, Kuriki-Olivo tries to make the opportunities afforded to her useful to others, an echo of how, in that early interview with Artspace, she differentiated herself from Duchamp: “In Puppies’ work, the objects must function or else they’re props.” This condition was clearly illustrated last year in “Body Fluid (Blood),” her first solo institutional exhibition in North America, at Remai Modern in Saskatoon, Canada. The show was inspired by her parents, who shared a rare blood type and frequently donated blood during her childhood, as well as by the queerphobic policies, dating back to the emergence of the AIDS crisis in the 1980s, that still place restrictions on blood donations based on gender and sexual orientation in a number of countries, including Canada and the U.S. Inside a private room in the museum’s ground-floor gallery, free rapid H.I.V. testing was offered on select dates, with peer mentors available for pre- and post-testing guidance. Outside the consultation room, a glass-doored refrigerator displayed an IV bag of Kuriki-Olivo’s blood, ineligible for donation, the floor around it scattered with stress balls — often given to donors to make their veins easier to locate — shaped like cartoon crimson droplets. On Saturdays, visitors could take a shuttle bus from the museum to a donation outpost administered by Canadian Blood Services.

The exhibition was both personal and site-specific: Saskatchewan has the highest rate of new H.I.V. infections in Canada (more than twice the national average), with Indigenous people disproportionately affected by the virus. “Rather than just landing there, putting my artwork up and then going away, I wanted to try to do something that really dealt with the place,” Kuriki-Olivo said. Drawing on her time working at TransLatin@ Coalition, a Los Angeles-based nonprofit that provides support and services to the trans community, she asked, “How can I incorporate what I was doing in social work with what I want to do with my art practice?”

At its most political, Kuriki-Olivo’s work is also at its most literal, and tends not to equivocate. In her most recent show at New York’s Queer Thoughts, “Executive Order 9066 (Soul Consoling Tower),” about the World War II internment of nearly 120,000 Japanese Americans and Japanese immigrants, for instance, the artist showcased an urn filled with the ashes of burned American flags.

“I’ve always been in love with the idea that art just blends in with life,” Kuriki-Olivo said. “That blurriness is where I thrive.”

The impulse to use the platforms made available to her “to try to create some equality when it doesn’t exist” defines not just her art but the artist, as well, a sense of responsibility that seems to have become especially urgent as she builds a community with other trans New Yorkers of color. “There’s a whole network of us: amazing, beautiful, brilliant, incredible trans artists and creatives,” she said. “And we’re not getting the attention we deserve.” Kuriki-Olivo wants to leverage her success to make space for others, and to take advantage of future invitations to show her own work as a chance to exhibit other artists so that they might “skip some of the unnecessary steps. … You really have to uplift your trans family, because the world is not going to do it.”

WHEN I ASKED her about the origin of Puppies Puppies, Kuriki-Olivo spoke of her past desire to disappear. Inspired by a former acquaintance who vanished after deleting everything from their Facebook page and then repopulating it with photos of cats, Kuriki-Olivo changed both the first and last name on her account to Puppies and replaced its content with pictures of small dogs.

“I romanticized disappearing,” she said, invoking Bas Jan Ader, the Dutch conceptual artist who was lost at sea while trying to cross the Atlantic in a small sailboat in 1975. But her alter ego also offered an escape hatch from a name and a way of being that had left her feeling alienated from herself: “I didn’t relate to who I was, so I erased my identity. But I put expressions out into the world as much as I could because I had a brain tumor, and I thought the world was going to end. That name came out of pain, but also out of wanting people to see there’s beauty that comes from this brain of mine.” During her transition, though, Kuriki-Olivo realized that she needed to reassess her decision to make work anonymously. “It meant something very different to hide as a trans woman,” she said, “because society forces us to hide.”