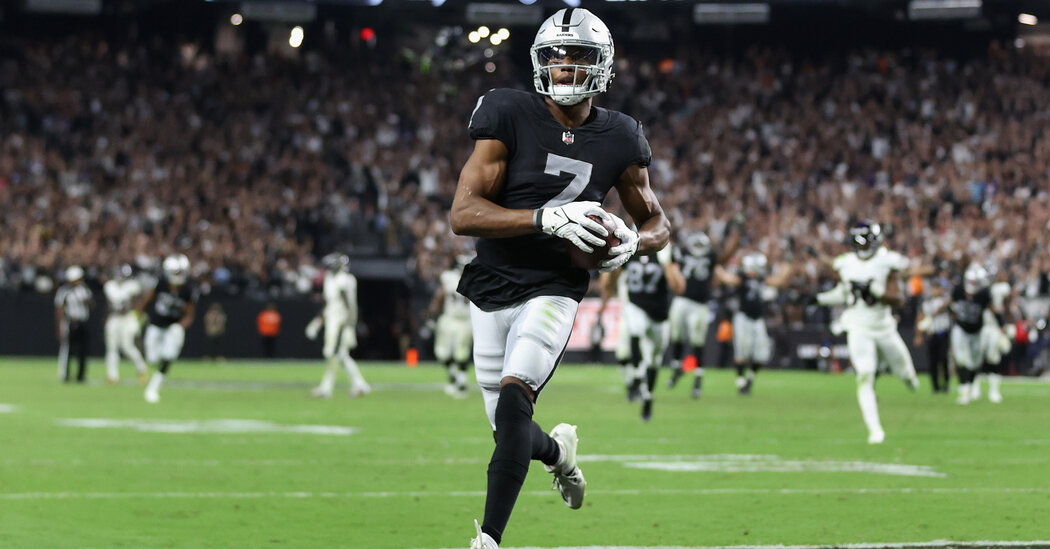 Anyone watching the Baltimore Ravens-Las Vegas Raiders game on Monday night got their money’s worth in the first 60 minutes.

The underdog Raiders fell behind by 14-0, then rallied to go toe-to-toe with the Super Bowl-contending Ravens all night. Marcus Mariota turned upfield for a 30-yard gain on a keeper. Derek Carr led three game-tying drives in the fourth quarter alone. And Daniel Carlson kicked a 55-yard field goal with two seconds left.

But it was the overtime that followed Carlson’s kick that made this game one to remember.

The Raiders got the ball first, and Carr took the team down the field again on a drive that culminated in an apparent winning touchdown pass to Bryan Edwards. The crowd, attending a regular-season game for the first time since the team moved to Las Vegas, celebrated. Some Raiders players ran to the locker room. But replay officials judged that Edwards should have been ruled down before he crossed the line, and the team had to slink back onto the field.

Still, the Raiders had first-and-goal at the 1. The game was surely almost over.

Carr’s sneak on first down turned into a rugby scrum that went nowhere, and then the Raiders managed a false start. With the ball back at the 5, Carr tried a pass, but it bounced off the helmet of the Ravens’ DeShon Elliott, took a wild carom and was intercepted by Anthony Averett.

Now the Ravens had their shot. But as Lamar Jackson dropped back to pass he was hit by Carl Nassib and fumbled. The Raiders were back in business.

After a 1-yard run to the Ravens 26, it was still only second down. But Coach Jon Gruden sent out the field goal team to win it right there. Unfortunately, some of the team seemed far from ready. The result was a delay-of-game penalty.

“Our kicker was warming up in the net; no one could find him,” was the startling postgame confession from Gruden.

After the penalty, Gruden decided to bring the Raiders offense out again. And Carr immediately made everyone forget the field goal debacle with a lofted pass to a bizarrely wide-open Zay Jones for the touchdown. Final score: Raiders 33, Ravens 27.

For the Ravens, widely considered Super Bowl contenders this season, it was a near miss that stung.

“That loss hurt, definitely,” Jackson said. “That game could have gone any way tonight.” The Ravens had not blown a 14-point lead since 2004.

The result may not convince anyone that the Raiders, who were 8-8 last season, are for real. But after the game Gruden saw the bottom line with a quote from the longtime Raiders owner Al Davis.

With a smile he said: “It’s like they say here. Just win baby.”