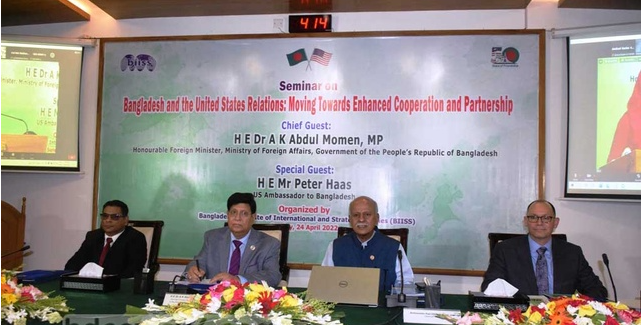 At a function in Dhaka, RAB chief Chowdhury Abdullah Al-Mamun expressed interest in working with the US ambassador; However, Ambassador Peter Haas Saf said that there was no chance of lifting the embargo on the Bangladeshi forces for the time being.

Ambassador Peter Haas was a special guest at a seminar on ‘Bangladesh-US Relations: Enhanced Cooperation and Progressive Partnership’ at the Bangladesh Institute of International and Strategic Studies (BIISS) in Eskaton, Dhaka on Sunday.

Foreign Minister AK Abdul Momen was the chief guest on the occasion. He spoke about the role of RAB in eradicating international terrorism and drugs.

RAB Director General Chowdhury Abdullah Al-Mamun, who is on the US sanctions list, was also present on the occasion.

Before Peter Haas spoke, Al-Mamun spoke about the US involvement in RAB activities during the Q&A session.At the end of his speech, he said, “We have successfully tackled religious extremism, drug eradication, human trafficking and successful operations against illegal weapons.

“We work primarily against terrorism and drugs, which are two of the priorities of the United States. We want to take our relationship to new heights in the interest of upholding human rights and the smooth functioning of the elite force. ”

“We want the United States to be involved in building a safe and secure community,” he said. They have worked with us before and have had many discussions with them on our campus. We also want the next involvement of the US Embassy. ”

It has been at the forefront of any bilateral talks since Washington imposed sanctions on seven military officials, including former RAB director general Benazir Bhutto and current police chief, in December over allegations of serious human rights abuses.

Dhaka reacted angrily to the ban on International Human Rights Day. Momen also spoke by telephone on December 15 with US Secretary of State Anthony Blinken.

Earlier this month, Momen called on Washington to lift the embargo, citing RAB’s role in combating terrorism and drugs with Blinken. However, he later said that the ban is not being lifted now.After the RAB chief’s remarks in the presence of Momen on Sunday, it was also clear from Peter Haas’s statement that the ban was not being lifted. He did say two conditions for lifting the ban, but did not elaborate.

“There is no chance of lifting the embargo on the Rapid Action Battalion without taking specific steps and ensuring accountability,” the ambassador said.

“We want a RAB that is as tough on counter-terrorism as it is on maintaining respect for basic human rights,” he said.

Peter Haas clarified that Bangladesh will get security assistance from the United States even if there is a ban on RAB.

“The imposition of sanctions on the RAB does not mean that we will not be able to increase our already strong security cooperation in enforcing the law,” he said. We will continue to work with Bangladesh to curb international crime and terrorism, increase border security and prevent violent extremism. ”

The US ambassador also said that the anti-terrorism unit of the police formed after the RAB was working with the counter-terrorism units.