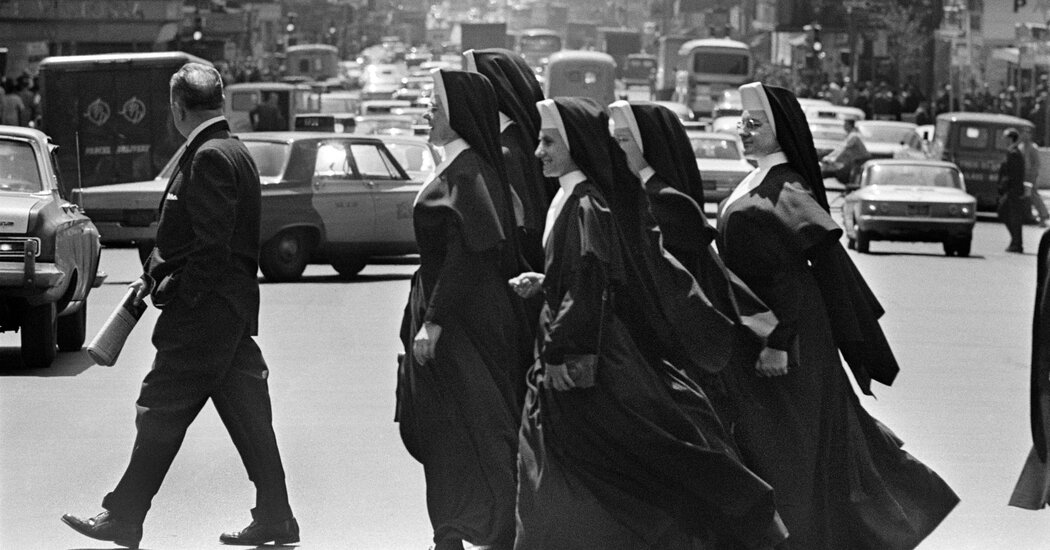 A group of crows is a murder; pandas, an embarrassment; nuns, a superfluity — a term that dates to the Middle Ages, when nunneries were overcrowded, lice-ridden and destitute. Today, there’s no such thing as too many nuns, as few women are taking vows. But the nuns who are among us remain ecclesiastical workhorses. Ordained men can stand in persona Christi, allowing them, for example, the superpower of transubstantiation. But if priests stand at the front of the church as middlemen between God and the faithful, nuns are at the front lines of suffering: They bring God to the meek, poor, sick, imprisoned — those, in other words, whom society has deemed superfluous and disposable.

“It’s the nuns who keep things running,” Alice McDermott writes in her excellent nun-dense novel “The Ninth Hour.” Her Little Sisters of the Sick Poor are prime examples, as the name suggests: They spoon-feed the toothless, comfort the grieving, scrub floors, clean wounds, change diapers, empty bedpans. The backbreaking work is unpleasant, but they’re dauntless; they’re committed to providing a “pure, clean antidote to filth, to pain.”

Nuns aren’t always in stories to serve as exemplars of goodness, of course: Chaucer’s nun was a phony. And the vow of chastity has long made nuns a target for eroticization. Boccaccio’s nuns are carnally insatiable; Isabella’s virtue is up for grabs in Shakespeare’s “Measure for Measure”; temptation and obsession drive Rumer Godden’s “Black Narcissus.” Other times, nuns are targets for politicization: Anti-Catholic authors of Gothic novels — Matthew Lewis, Ann Radcliffe, Charlotte Brontë — were brutal to their sisters, beating them bloody or rendering them as evil, vindictive ghosts. In these stories, nuns are made objects of fantasy, lust and loathing.

But in more recent fiction, the extent of nuns’ otherness makes for tension and rich characterization. Nuns keep themselves physically and culturally confined, ostensibly concerned with salvation and the celestial, but they, more than any other group in the church hierarchy, bump up against the world and all its ugly suffering. In that friction lies much narrative potential.