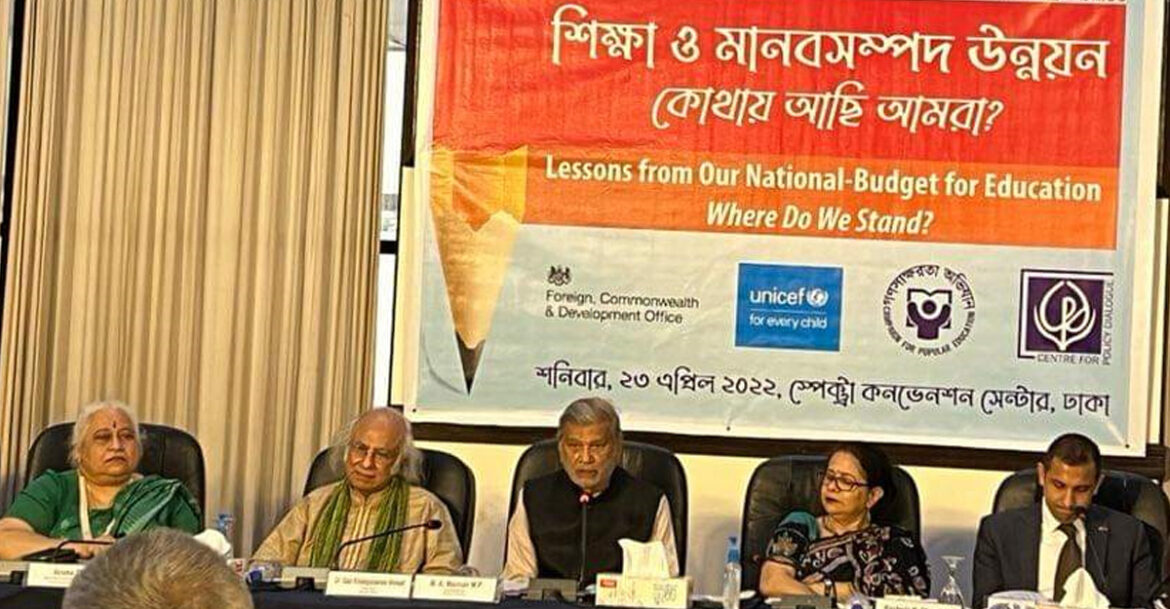 Planning Minister MA Mannan said the country’s education budget needs to be increased. Because the budget in the education sector is less than required. That is why we should spend the most in this sector.

‘Education Budget, Budget Education: Education and Human Resource Development, Where Are We?’ He said this in a seminar titled

The planning minister said, ‘I work as a statistician. I collect information from all over the country. Then I try to plan based on that information. The big problem of our country is implementation. We think a lot, but the implementation is low. However, with regard to education, I would say that the budget in this sector must be increased. I talk about it again and again in Parliament. I will say more in the future that the budget for education should be increased.

Rasheda K Chowdhury, Executive Director of Campaign for Education delivered the welcome address at the seminar. At the seminar, deprived students, teachers and parents from different districts of the country presented their various problems and demanded their implementation.
. . . . . . . . . . . . . . . .
Center for Policy Dialogue (CPD) Executive Director. Fahmida Khatun said, ‘Educational institutions could not be opened for the last two years due to corona. Many girls are married at this time. Covid-19 has caused a lot of damage in the education sector. This initiative will be very useful to cut our losses.

On behalf of the media, Mostafa Mallick, special correspondent of Channel I, said: The stipend money is influential and is given to the children of the chairmen. I am giving cars worth two crore rupees to the mayors of the municipality. So how can a primary school get a stipend of 125 rupees? ‘

CPD Research Fellow Muntasir Kamal said, “Education has been made a priority sector everywhere. However, looking at the budget expenditure, it is seen that it is conflicting. If the budget is not increased then how will there be development in education. If we look at the past years, the budget for education is decreasing day by day.

He said, ‘Looking at the dropout rate of students, the fear remains. The educational institution that was closed for two years has put it at great risk. In the coming budget, we have to play a role in reducing the risk of education and also pay special attention to overcoming them.

‘I have spoken to the Prime Minister. The government has said it will enact education laws. But even after two and a half years, that law has not been passed. Wanting to know when. Development of education is not possible without education law.

UNICEF Bangladesh Deputy Representative Bira Mendora said, “Bangladesh is a very modern country. However, the quality and system of education in this country lags far behind the developed world. Yet the quality of education at the rural level in this country is not so high. As a result, despite having a lot of talent in the country, they are not able to be made that way. Therefore, it is possible to build a prosperous country by increasing the budget for education and giving them all the facilities. Today’s children will lead the next Bangladesh. So everything should be done in their care. ‘