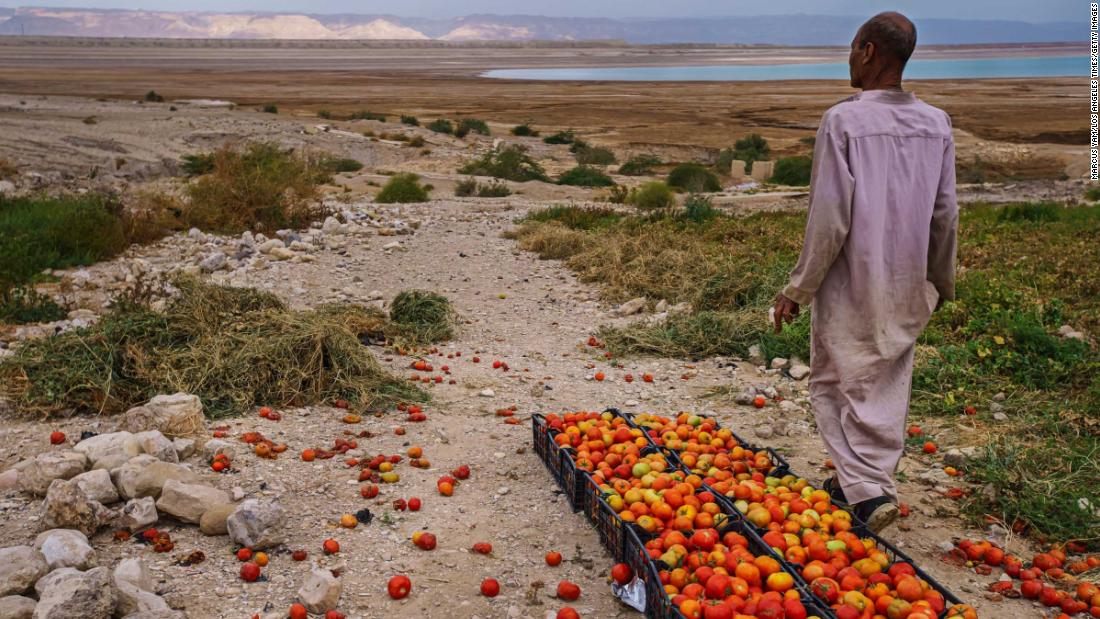 Lake Urmia, Iran (CNN)The ferries that once shuttled tourists to and from the little islets in Iran’s Lake Urmia sit rusty, unable to move, on what is rapidly becoming a salt plain. Just two decades ago, Urmia was the Middle East’s biggest lake, its local economy a thriving tourist center of hotels and restaurants.

“People would come here for swimming and would use the mud for therapeutic purposes. They would stay here at least for a few days,” said Ahad Ahmed, a journalist in the former port town of Sharafkhaneh as he showed CNN photos of people enjoying the lake in 1995.

Lake Urmia’s demise has been fast. It has more than halved in size — from 5,400 square kilometers (2,085 square miles) in the 1990s to just 2,500 square kilometers (965 square miles) today — according to the Department of Environmental Protection of West Azerbaijan, one of the Iranian provinces where the lake is located. There are now concerns it will disappear entirely.
Such problems are familiar in many parts of the Middle East — where water is simply running out.
The region has witnessed persistent drought and temperatures so high that they are barely fit for human life. Add climate change to water mismanagement and overuse, and projections for the future of water here are grim.
Some Middle Eastern countries, including Iran, Iraq and Jordan, are pumping huge amounts of water from the ground for irrigation as they seek to improve their food self-sufficiency, Charles Iceland, the global director of water at the World Resources Institute (WRI), told CNN. That’s happening as they experience a decrease in rainfall.
“They’re using more water than is available routinely through rain. And so groundwater levels are consequently falling because you’re taking water out faster than it’s being replenished by the rainfall,” he said.
That’s what’s happening in Iran, where a vast network of dams sustains an agricultural sector that drinks up about 90% of the water the country uses.
“Both declining rainfall and increasing demand in these countries are causing many rivers, lakes, and wetlands to dry up,” Iceland said.
The consequences of water becoming even scarcer are dire: Areas could become uninhabitable; tensions over how to share and manage water resources like rivers and lakes could worsen; more political violence could erupt.
In Iran, Urmia has shrunk largely because so many people have exploited it, and some of the dams built in its basin mainly for irrigation have reduced the flow of water into the lake.
Iran’s water woes are already a deadly issue. In one week in July, at least three protesters were killed in clashes with security officers in demonstrations against water shortages in the country’s southwest.
The country is experiencing some of the driest conditions in five decades, according to the country’s meteorological service.
The Middle East’s winters are projected to get drier the more the world warms, and while the summers will be wetter, the heat is expected to offset its water gains, according to scientists’ latest projections published earlier this month by the UN Intergovernmental Panel for Climate Change report.
“The problem is, with this whole temperature rise, whatever rainfall will come will evaporate because it is so hot,” Mansour Almazroui, director at the Center of Excellence for Climate Change Research at Saudi Arabia’s King Abdulaziz University, told CNN.
“The other thing is, “This rain is not necessarily going to be usual rain. There’s going to be extreme rainfall, meaning that floods like those happening in China, in Germany, in Belgium, these floods will be a big problem for the Middle East. This is really a big climate change issue.”
A study by the Iranian Energy Ministry found the demise of the lake was more than 30% attributable to climate change.
These changes are not only having an impact on the amount of water available, they are also affecting quality.
Lake Urmia is hypersaline, meaning it’s very salty. As it has shrunk, the salt concentration has increased and gotten so extreme, using it for irrigation is damaging farmers’ crops.
Kiomars Poujebeli, who farms tomatoes, sunflowers, sugar beet, eggplant and walnuts near the lake, told CNN that the salty water has been disastrous.
“The day the soil will become unfarmable is not far away,” he said.
A vicious cycle
In Jordan, one of the most water stressed countries in the world, people have become used to living with very little water.
A study published in the Proceedings of the National Academy of Sciences showed that Jordanians will have to halve their per capita use of water by the end of the century. Most Jordanians on lower incomes will live on 40 liters a day, for all their needs — drinking, bathing and washing clothes and dishes, for example. The average American today uses around 10 times that amount.
In many Jordanian homes, water isn’t necessarily available every day, said Daniel Rosenfeld, a professor with the Program of Atmospheric Sciences at The Hebrew University of Jerusalem.
“Jordan now has a critical shortage of water — water reaches the houses in Jordan once or twice a week, even in the capital Amman,” Daniel Rosenfeld, a professor with the Program of Atmospheric Sciences at The Hebrew University of Jerusalem. The capital actually has existential problems right now, already,” Rosenfeld said.

Groundwater levels in parts of the country are dropping by well over one meter a year, studies show, and waves of refugees from many countries in the region have put extra pressure on the already stressed resource.
The secretary-general of Jordan’s Water Authority, Bashar Batayneh, told CNN that the country needs more funding from the rest of the world to deal with this increased demand for water.
“Jordan bore the heavy load of the Syrian refugee crises on behalf of the international community and was deeply impacted regarding water. Refugees cost the water sector over $600 million per year while Jordan received a fraction of this amount from the international community,” he said.
He added that Jordan had much less rain in 2020 than it did the previous year, putting more than a quarter of water resources at risk and halving drinking water sources.
But it’s not only climate change. The country relies on the Jordan River system, which also runs through Israel, the West Bank, Syria and Lebanon, and dams building along the rivers have severely cut the flow of water flow to Jordan. Jordan, too, uses canals to redirect the river’s waters for irrigation. Conflict has flared several times around the river system in the past.
It’s a transboundary problem also seen in other parts of the region along the Euphrates and Tigris rivers, as well as in northern Africa along the Nile.
Jordan, Israel and Syria have gotten better at coordinating management of the river system they rely on, but tensions often erupt. Experts have long warned that water scarcity worsened by climate change could lead to more conflict.
A tomato farmer looks off towards an area where the Dead Sea has receded in Ghor Haditha, Jordan, on April 10, 2021.
A tomato farmer looks off towards an area where the Dead Sea has receded in Ghor Haditha, Jordan, on April 10, 2021.
Jordan has little choice but to buy large amounts of water from Israel, which has an enormous desalination program, in which it removes salt from seawater to make it fit for human consumption. But desalination is energy-intensive — using up huge amounts of energy; energy that is not yet green and renewable, and only adds to global warming, a major driver of water scarcity in the first place.
As the climate continues to warm and water runs scarce, part of the solution in the Middle East will have to involve reducing water use in agriculture. That can also mean changing the kind of food farmers grow and export, Rosenfeld said.
“In Israel, for example, we used to grow a lot of oranges, but at some point, we realized that we are exporting water that we don’t have,” he said, adding that crops could also be engineered to be more resilient to heat and dryness.
And Almazroui, from King Abdulaziz University, said that dams could be better organized to consider changing rain patterns. Coordination on managing rivers that flow across countries also has to improve.
But that’s not going to help a farmer whose family has owned land for generations and can’t necessarily move to wetter climes, or has little control over where a neighboring country might build a dam.
An aeriel view on June 20, 2021 of the drying Chibayesh marshland in Iraq&#39;s southern Ahwar area.
An aeriel view on June 20, 2021 of the drying Chibayesh marshland in Iraq’s southern Ahwar area.
Raad al-Tamami, a 54-year-old father of five who lives in Diyala province northeast of Baghdad, relies on the Diyal River, a tributary to the Tigris River, for water. The Diyal has been drying up for years and has forced al-Tamami to halve his fruit production across his three farms.
He and his fellow farmers are working on a water rationing schedule, and he sometimes waits up to a month for the water to come.
This dependence on more water to ensure food security could ironically put the availability of food at risk — farmers are only going to keep farming under these difficult conditions for so long.
That’s what plagues al-Tamami’s mind all the time.