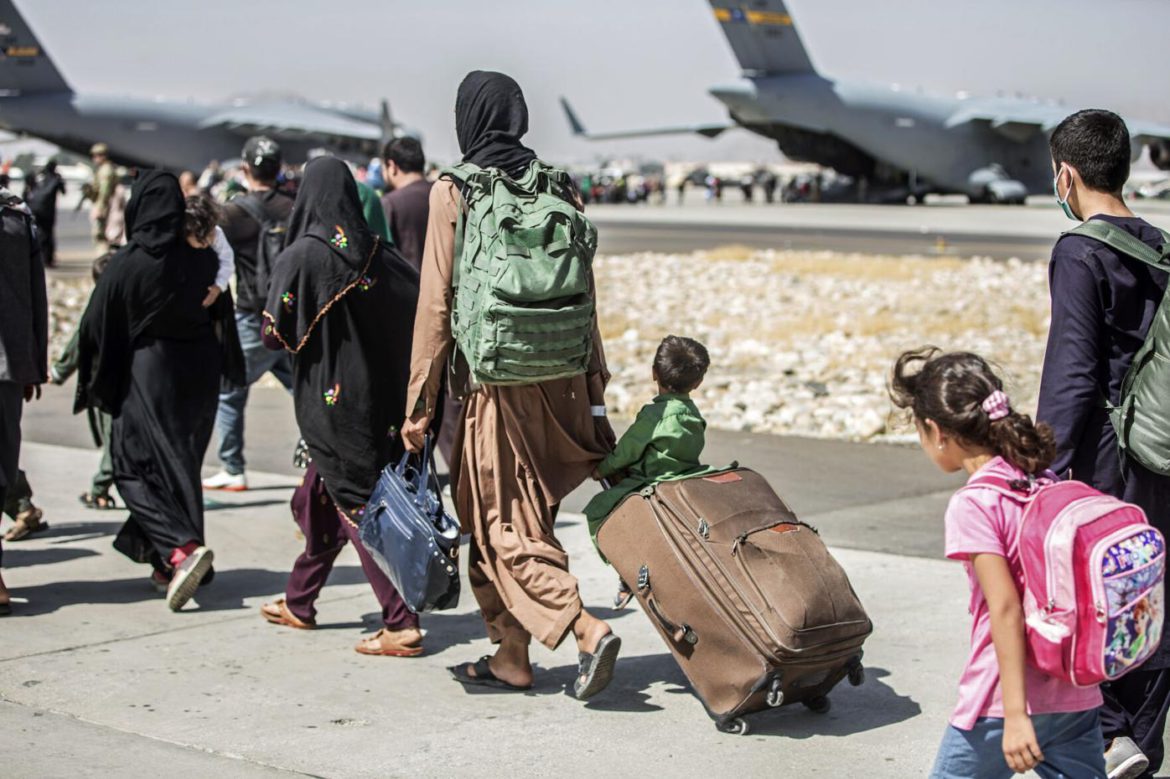 MILAN — The Afghan director of a school for girls dedicated to an Italian newspaper correspondent killed in Afghanistan is trying desperately to gain access to the Kabul airport for evacuation, with anxiety growing as the end of flights nears.

Shir Ahmad Mohammadi has sent messages to contacts in Italy as well as Italian officials in Kabul, saying that the Taliban are not allowing him and his family near the airport, Corriere della Sera reported on Thursday.

“Help me, I can’t go on. The Taliban are not allowing us to pass. They are asking for U.S. documents that we don’t have,” Mohammadi wrote.

He is the director of a school in Herat province named for Maria Grazia Cutuli, a Corriere correspondent killed in 2001. He traveled by bus with his wife and two daughters, finding himself in the capital controlled by the Taliban and with foreign troops by now closed off in the airport.

“I served female students in Afghanistan, giving them the chance to study in the name of your country. Now it is time that I think of my daughters, and try to get them to safety,’’ he wrote. “I have my two daughters with me, what should I do, I cannot leave them to be treated in this way. I have to take care of their security and their dignity. That is why I made this trip.”

He said his wife and daughters are under increasing strain. “I don’t know how long we can keep going in these conditions,’’ Mohammadi wrote.

HERE’S WHAT ELSE IS HAPPENING:

WARSAW, Poland — Poland says the reason it has halted its evacuation flights was so that the United States could meet its Aug. 31 deadline to quit Kabul.

That is the “date when the last U.S. soldier is to leave Kabul airport,” Deputy Foreign Minister Marcin Przydacz said Thursday, but to make that possible all others must leave first.

Przydacz said that some countries have not yet evacuated all their citizens and associates and for this reason they were continuing their evacuation missions. Poland however has met its evacuation goals and ended its mission.

Przydacz said it was a difficult decision to wrap up the evacuation but that “today, with such high level of terrorist threat, amid the growing instability, we see no possibility of putting the lives of our people at risk any longer. They have really done an immense job.”

He mentioned the consuls at the spot, finding people in the crowd, diplomats in various countries securing instant permission for Polish planes to fly over their territory, and officials in Warsaw who worked round the clock to bring people to safety.

Poland has evacuated some 1,300 people in 14 flights, through Uzbekistan. Some 200 of the evacuees were rescued at the request of other countries, and of the IMF. The last group arrived Thursday morning.

Przydacz said that Poland will be ready to air lift more people if commercial flights from Afghanistan are restored.

ISTANBUL – The first Turkish troops evacuated from Afghanistan arrived back in Turkey on Thursday.

“We aim to complete the transfer as soon as possible,” Defense Minister Hulusi Akar said in a statement.

COPENHAGEN, Denmark — The foundation created by toymaker Lego and its parent company say they will donate 100 million kroner ($16 million) to support vulnerable children in Haiti and Afghanistan.

“The humanitarian crises that are happening in Haiti and Afghanistan are unimaginable and only intensified by the COVID-19 pandemic,” said Thomas Kirk Kristiansen, chairman of the LEGO Foundation.

Since May 2021, more than 500,000 people have been displaced in Afghanistan. As for Haiti, the Aug. 14 violent earthquake that was followed by a tropical storm “has left half-a-million Haitian children with limited or no access to shelter, safe water, health care, and nutrition.”

“With COVID-19 still (being) an imminent threat to the health and safety of Haiti’s population, the loss and damage associated with these most recent natural disasters only further compounds the dire situation so many children and families are experiencing,” they said in a joint statement.

Based in Denmark, the Lego Foundation and parent company KIRKBI A/S said that they had partnered up with, among others, two U.N. agencies — UNICEF and UNHCR — as well as Education Cannot Wait, a global fund to transform the delivery of education in emergencies.

DUBAI, United Arab Emirates — Qatar says it has helped the evacuation of more than 40,000 people from Kabul airport.

The small nation on the Arabian Peninsula says most will transit through Qatar after staying in temporary accommodations.

Qatar says that “the evacuation efforts will continue in the coming days in consultation with international partners.”

Qatar also hosts an office of the Taliban and was the site of negotiations between America, the toppled Afghan government and the insurgents.

NEW DELHI — India says it has evacuated most of its nationals from Afghanistan and is doing everything to bring them back home.

India’s External Affairs Minister Subrahmanyam Jaishankar told a meeting of political leaders on Thursday that India has operated six flights so far from Kabul after a stunning takeover by the Taliban. “A few of them (Indians) are still there.”

He didn’t give the exact number of Indians and Afghans evacuated so far from Kabul but the Indian media put their numbers around 800.

He declined to say how India is going to deal with the Taliban government in Afghanistan. “The situation in Afghanistan is yet to settle down. I will talk about it later,” Jaishankar told reporters.

New Delhi had stayed away from the Taliban except for back-channel contacts in recent months. It didn’t recognize the Taliban government that ruled Afghanistan from 1996-2001.

ISLAMABAD — Pakistan’s prime minister has called on the international community to continue engagement with Afghanistan, saying it was a “way forward to avert any humanitarian crisis and secure peace and stability.”

Imran Khan made his comment during a meeting with David Beasley, executive director of the United Nations World Food Program who met with him in Islamabad. Khan also called for the formation of an inclusive government to ensure peace and avoid an humanitarian crisis, after the Taliban seized control of Afghanistan.

The latest development comes as dozens of Afghans continue to enter Pakistan via its land borders. But the number of Afghan people entering Pakistan through land routes has been steadily decreasing since earlier this week.

BUDAPEST, Hungary — Hungary says its army has evacuated all Hungarian citizens from Afghanistan of which the defense ministry is aware.

Defense Minister Tibor Benko told a press conference on Thursday that 540 people, among them 57 Afghan families including 180 children, had been evacuated to Hungary from Kabul.

Of the Afghan citizens who assisted Hungarian forces in Afghanistan since 2003, the army has evacuated 87%, he said, adding that Hungarian, Afghan, Austrian and U.S. citizens were evacuated during the operation.

Seven Hungarian soldiers were killed during military operations in Afghanistan since 2003, Benko said.

THE HAGUE, Netherlands — The Dutch government says it is pulling its troops and diplomats out of the Kabul airport over the security situation.

In a letter to parliament Thursday, the foreign and defense ministers say that “the Netherlands has been told by the United States to leave today and will most likely carry out its last flight later today.”

They add that “in light of the extremely quickly deteriorating situation in and around the airport, evacuees can no longer be assisted by the Netherlands to get access to the airport.”

LONDON — The British, French and Danish militaries have given stark warnings about the security situation at the Kabul airport, where Afghan civilians are scrambling to evacuate ahead of the Aug. 31 deadline for foreign troops to leave Taliban-controlled Afghanistan.

British Armed Forces Minister James Heappey told the BBC on Thursday there was ”very, very credible reporting of an imminent attack” at the airport. Other warnings emerged about a possible threat from Afghanistan’s Islamic State affiliate, which likely has seen its ranks boosted by the Taliban freeing prisoners across the country.

Heappey conceded that people are desperate to leave and “there is an appetite by many in the queue to take their chances, but the reporting of this threat is very credible indeed and there is a real imminence to it.”

French Prime Minister Jean Castex told French radio RTL on Thursday that “from tomorrow evening onwards, we are not able to evacuate people from the Kabul airport” due to the Aug. 31 American withdrawal.

Meanwhile, Danish defense minister Trine Bramsen bluntly warned: “It is no longer safe to fly in or out of Kabul.” Denmark’s last flight, carrying 90 people plus soldiers and diplomats, already had left Kabul.

Poland and Belgium have already ended their evacuations from Afghanistan.

BERLIN — The German army says it has sent another military transport plane to Kabul to evacuate further people from the Afghan capital.

The army tweeted that the plane departed from Tashkent Thursday morning.

Altogether, the German army, or Bundeswehr, has airlifted 5,193 people out of Kabul, 539 of those on Wednesday.

The defense ministry tweeted that, “We could already help many. We will evacuate until the last second.”

Government officials have not said when exactly the German evacuation mission is going to end but it is expected that the country will stop evacuating people with military planes ahead of the Americans’ pullout date of August 31.

WARSAW, Poland — Poland’s prime minister said that the country has evacuated over 900 Afghan citizens, as the country prepared to end its evacuation mission later Thursday.

Another government official, Michal Dworczyk, said that a total of 44 flights were made transporting over 1,100 people. More than 900 of them are Afghans who have cooperated with Poland for years. He said the last transport with civilians from Afghanistan would land in Poland on Thursday morning.

The Afghan ambassador to Poland, Tahir Qadiry, also spoke at the news conference, expressing his thanks to the Polish government and the Polish people and voicing hope that the evacuated Afghan citizens will be able to return home one day.

“We can continue the operation of the airport there even after our troops withdraw,” Kalin told broadcaster NTV. “Our civilian experts can provide support for the airport and negotiations regarding this are continuing.”

Turkey announced its troops had begun to leave Kabul, where they have been helping guard the airport, on Wednesday evening. Kalin said the troop withdrawal would be completed within 36 hours.

Prior to the Taliban taking Kabul on Aug. 15, NATO member Turkey had offered to secure and operate the airport following the U.S. withdrawal.