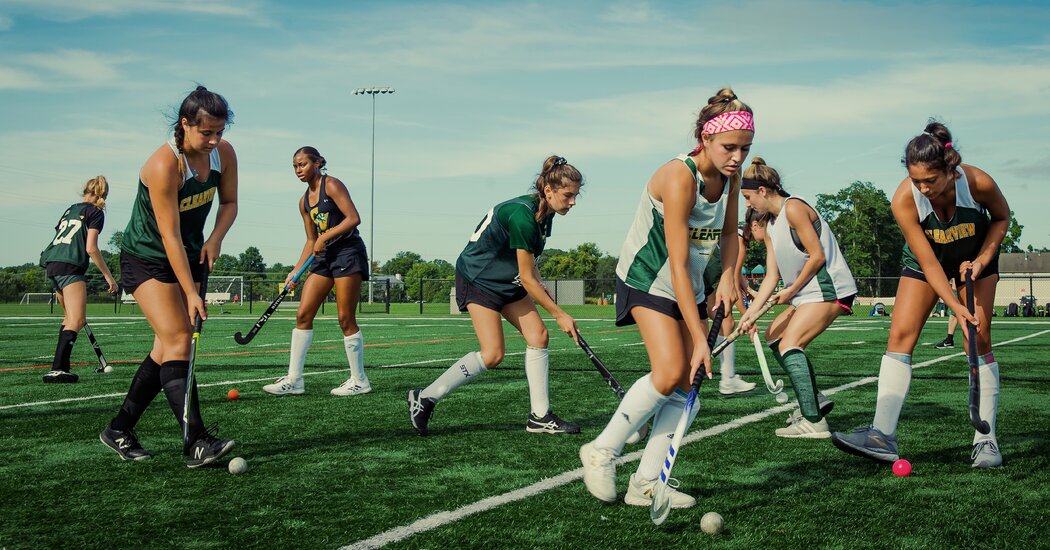 If the guiding spirits of high school sports are competition, fellowship and common purpose, the 2020-21 school year brought challenges to them all. Close-knit teams, accustomed to the physical camaraderie of the locker room or the huddle, had to keep their distance socially; coaches, used to the normal pattern of practices and games, found themselves canceling sessions, posting workouts online and doing their best to send encouraging emails to their players. In some cases, entire seasons were called off.

These disruptions hit many teams hard, but they posed a unique frustration for those coming off breakthrough seasons the year before. Such was the case for the Clearview Regional High School girls’ field-hockey squad in Mullica Hill, N.J. In 2019, they won a state championship, capping more than a decade of growth under coach Britney Ewan, a former midfielder at Millville High School, just 30 minutes south of Mullica Hill. When Ewan (below center) took over the program in 2006, its records had been hovering around .500 in recent years. But Ewan set to work fashioning a competitive team. In 2012, she hired as an assistant coach Jaclyn Guth, who had played for Ewan. “Beforehand, we were very old-school,” Guth says. “Britney revamped everything: how you hit the ball, how you pass the ball, how you set up on the field and work with your teammates.”

By 2017 Ewan and Guth had led the team to the school’s first field-hockey sectional title. The state championship two years later led to a Coach of the Year award for Ewan and a celebratory ride through town, courtesy of the local Fire Department.

Then came 2020, an unrelenting opponent that confronted reigning high school state champions all over the country. Clearview succeeded in making it through much of the season — “I always said that any day we have a stick in our hands is a good day,” Ewan says — triumphing over interruptions and injuries and Covid scares and getting all the way back to the playoffs. But in November, the sectional championship game was canceled, and the 2020 season came to an abrupt end.

Nine months later, in mid-August, the team gathered for another title run. It began with tryouts. The players seemed nervous but also comforted by the return of an old routine. As the drills commenced, following a mile-long warm-up run around the field, the sight and sound of field-hockey balls spilling from a large cooler could be taken as a hope-filled call to action. ‘My sister was actually a senior for the 2019 team that won the state championship, so being that young and being able to watch that game, and to see how they’ve been doing the past few years, has been amazing for me.’

At the beginning of every season, Coach Ewan gives her players a thick handout with team rules and expectations, as well as information about the recruiting process for those who hope to play in college. The front page includes a quote attributed to the psychiatrist Karl Menninger: “Loyalty means that I share a common ideal with you and that, regardless of minor differences, we strive for it shoulder to shoulder, confident in one another’s good faith, trust, constancy and affection.”

DeLeo adds, “It was definitely hard.” The social-distancing requirements were frustrating. “We weren’t allowed to do things together that would benefit us, like team bonding,” DeLeo says. “It makes the team so much stronger. It makes everything click.”

For some players, it was difficult to maintain motivation during the pandemic. “Going into the season, it was hard to remember my love for field hockey,” Anna Bruno says. Covid upended her usual preparations, which included playing for her club team and attending university-hosted clinics. But after her teammates elected her varsity captain, a distinction typically reserved for seniors, Bruno was inspired anew. “Coming back from a state championship, we had a lot of pressure on ourselves,” she says. “So my goal was to keep things upbeat and fun.”

Among the younger players who caught Ewan’s eye was a sophomore named Destiny Joseph, who played on the junior-varsity squad last year; she was an admiring eighth grader when Clearview won its state title. The solitary nature of the lockdowns she experienced, Joseph says, made it clear to her how much she wanted to excel at field hockey and be part of a championship herself.

Dina Litovsky is a photographer based in New York and a regular contributor for The Times Magazine.