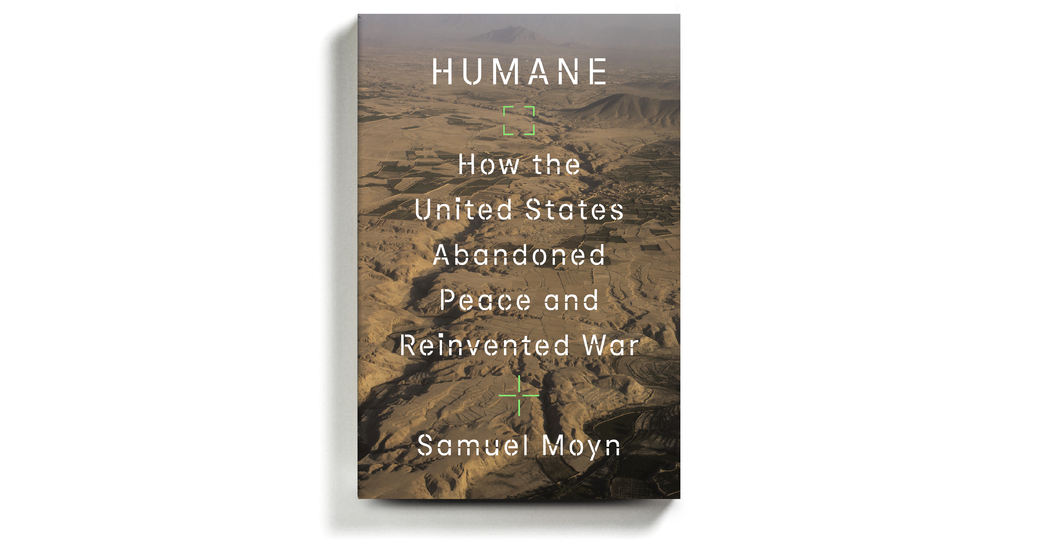 Can we imagine, as Samuel Moyn puts it in “Humane,” his smart and provocative new book, “a future of war beyond killing”? It sounds like a worthy goal. Why wouldn’t less killing be anything but better?

Yet Moyn suggests that making war less cruel amounts to a centrist compromise that diverts Americans from pursuing the more radical goal of genuine peace. Spectacular technological advances — weaponry that’s more precise and less deadly — have combined with a lack of moral vision to induce a wan sense of complacency. Where Americans used to think about a future beyond war itself, the forever wars of the last two decades seem to have elicited a fixation on means instead of a reckoning with ends — an anxious discussion of how American forces were comporting themselves abroad instead of a substantive debate over what they were doing there in the first place.

Arriving 20 years after 9/11, as the United States has withdrawn its troops from Afghanistan, “Humane” encourages readers to ask central questions too often lost amid the chatter of the foreign policy establishment. Among those favoring a continued American presence, a popular term has been “light footprint” — the notion that drones and surveillance technologies can replace large-scale conventional forces. Moyn, a Yale professor of history and law who has written several books about human rights, makes clear that those technologies have indeed reduced casualties — at least when compared with conventional warfare — but they have also opened up new ethical conundrums.

“Unless pursued in tandem with an impassioned commitment to controlling the use of force in the first place,” Moyn writes, “this new form of war is especially apt to endure in time and spread in space.” Less lethal might mean more bearable — at least for Americans at home, their consciences soothed while remote-controlled robots conduct faraway assassinations from the sky. Moyn is disturbed by a “normalization of humane control,” a blurring of the line between warfare and policing, as Americans lose sight of a more ambitious ideal: “We fight war crimes but have forgotten the crime of war.”

“Humane” is divided into two parts: “Brutality,” which starts off in the mid-19th century, during the beginnings of a peace movement that aligned with Enlightenment ideals of human perfectibility; and “Humanity,” which starts with the Vietnam War and brings the narrative up to the present day. Until the last few decades, Moyn says, the idea of making war less brutal and more humane was mostly a fantasy. International laws may have put limits on abuses (at least in theory — Moyn makes sure to detail the long history of international law being assiduously ignored), but the horrific bloodshed of two world wars showed how mechanized warfare could be made ever more vicious.

Besides, the dictates of law were one thing, while enforcement (“You and what army?”) was often another. Loopholes were big enough for tanks to drive through. Even Hitler, while pursuing his expansionist wars of aggression, kept using the language of self-defense. Moyn also shows how talk of “peace” and “humanity” was so often limited to a trans-Atlantic conversation “among white people,” while counterinsurgencies and colonial wars against racialized others were conducted with unbridled cruelty. The United States was no exception. A military governor of the Philippines in 1901-1902, who also happened to be a veteran of the Indian Wars, saw Filipinos as a population to be crushed: “Murder is almost a natural instinct with the Asiatic, who respects only the power of might.”

Moyn contrasts two pivotal moments in modern American warfare: the My Lai massacre of 1968, when American soldiers murdered as many as 504 unarmed Vietnamese civilians; and the torture of prisoners at Abu Ghraib, which came to light with grotesque photographic evidence in 2004. My Lai, Moyn says, galvanized many Americans against the Vietnam War and helped end it; whereas the discovery of the horrors at Abu Ghraib led to “a mainstream consensus” that gathered “around the ethics of humane fighting, rather than the immorality of the entire enterprise of the war on terror.”

Moyn keeps emphasizing this difference — but is it really so surprising? One war was conducted in the name of a Cold War abstraction; the other in response (at least at first) to an attack on American soil that killed nearly 3,000 people. You can be an adamant critic of the war on terror while nevertheless comprehending why it became so entrenched.

In “Humane,” the figure who exemplifies this entrenchment is Barack Obama, who campaigned in 2008 as a critic of the forever wars and then proceeded to rely on drone strikes with startling regularity. He abhorred torture specifically, but his lawyerly administration placed the overall war on terror on a more secure legal footing. “Obama pivoted from being a kind of peace candidate,” Moyn writes, “to becoming a permanent if humane war president.”

“Pivoted,” “a kind of,” “permanent if humane” — the phrasing reflects what seems to be Moyn’s own ambivalence about the famously ambivalent president, who is depicted in “Humane” as both a cynical opportunist and a sincere public servant. On the one hand, Moyn says, Obama “allowed” his antiwar supporters to believe he was more of a categorical pacifist than he was; on the other, the president was entrusted with “protecting the American people first and foremost,” and couldn’t turn “a blind eye to terrorism.” But what Obama did, Moyn writes, was design “a far bigger and more encompassing form of war than necessary.”

The question of what constitutes “necessary” cuts to the heart of whether war can ever be abolished — a question that reverberates through this book, even if Moyn is too searching a thinker to proclaim that he has it definitively figured out. “Humane” begins and ends with Leo Tolstoy, a committed pacifist who believed that trying to make war more humane was like trying to make chattel slavery more humane. “What if reformers humanized an institution they could and should have eradicated?” Moyn writes, summarizing Tolstoy’s argument. In the United States, the monstrous institution of chattel slavery was of course eradicated — but only with the Civil War.