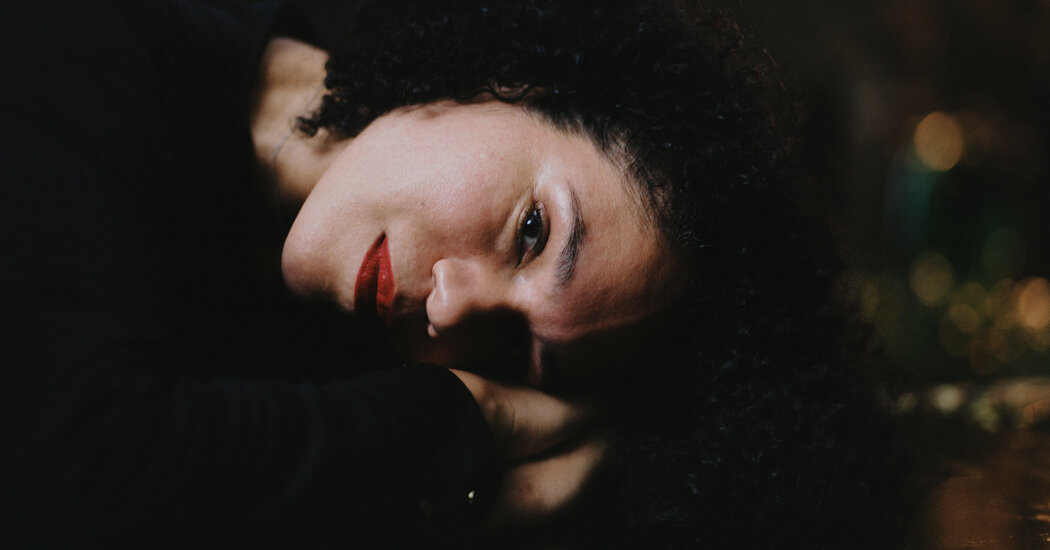 The history of classical music in the United States is one long identity crisis: the search for a homegrown sound, free from European influence. That anxiety has manifested itself time and again as self-sabotage, with some composers — almost always white men — exalted as pathbreakers, while truly original work coming from artists of color has been overlooked.

That has changed in recent years: in fits and starts, then suddenly, with the wave of Black Lives Matter demonstrations in the wake of George Floyd’s murder. Classical institutions en masse have made earnest, if sometimes clumsy, efforts to rise to the moment and grant overdue attention to the marginalized composers who have always had answers to the question of America’s musical identity.

One composer the field has especially turned to is Jessie Montgomery, whose often personal yet widely resonant music — forged in Manhattan, a mirror turned on the whole country — will be difficult to miss in the coming season.

The number of times Montgomery’s orchestral works were programmed more than doubled each year from 2017 to 2020, said Philip Rothman, her publishing agent. (And that’s just a corner of her output.) Several years ago, that number was about 20; in 2021, it is expected to be nearly 400, including at the Los Angeles Philharmonic, the St. Louis Symphony Orchestra and the Minnesota Orchestra. And her calendar is booked with commissions far into the future, including as the Chicago Symphony Orchestra’s new composer in residence.

Some of the spotlight on Montgomery is a product of pandemic restrictions; many ensembles have made cautious comebacks with small-scale pieces for strings, which are the heart of her body of work. But her swift rise to prominence is also the result of orchestras overhauling their repertoires to more prominently feature composers of color — an achievement that can sometimes feel like a burden on a single artist to speak for a whole race or nation.

A new portrait of American sound has nevertheless emerged, with Montgomery’s music providing some of the latest, crucial touches.

“She’s pretty much changing the canon for American orchestras,” said Afa S. Dworkin, the president and artistic director of the Sphinx Organization, which promotes racial and ethnic diversity in music. “The true language of American classical music is something that will distinguish our canon, and she is shaping its evolution.”

MONTGOMERY, 40, is a child of the Lower East Side, born to artistic parents. Her mother, Robbie McCauley, made theater that interrogated the country’s racial history; her father, Edward Montgomery, ran a studio where the young Jessie would sometimes hand-operate the elevator for jazz, punk and opera musicians.

With Montgomery studying violin in one room; her father composing in another; and her mother rehearsing or writing in a home studio, their apartment had the feel of an artist residency. “There was no routine,” Montgomery said in a recent interview. “Everyone was sort of in their own modules doing their own thing. But I was always in a state of wonder.”

She was exposed from an early age to the downtown milieu of her parents, while learning violin techniques and repertoire suited to both the uptown establishment and the world of improvisation.

Her teacher Alice Kanack, Montgomery recalled, “created these improvisation games with the philosophy that each child has their own individual, innate, creative voice, and that it has to be encouraged while they’re young.” Those games provided a natural segue to composing, which she began in earnest at 11.

By the 1990s Montgomery was a serious student who also spent her nights with friends raving in Queens to house music and hip-hop; there were, she said, “a lot of drugs.” But violin was something of a salvation for her, and she followed it to the Juilliard School. (Leaving the city was never a question because, she said, “I was still in the mind-set that there’s no other place like New York.”)

Violin also led Montgomery to the Sphinx Organization’s annual competition. It was the first time she had been asked to play a piece by a Black composer.

“I lived in New York, so I was always used to having all different kinds of cultures in my friend group,” Montgomery said. “So that was not unusual. But this was purely Black and Latino kids. And how we all stayed in touch and continue to collaborate with each other is really the strength of the organization.”

She has been associated with Sphinx for years, performing in the Sphinx Virtuosi chamber ensemble and eventually building a relationship that extended to teaching at the Sphinx Performance Academy and, shortly before the pandemic, being awarded the organization’s medal of excellence.

“Jessie was a beautiful chamber musician from the beginning,” Dworkin said. “Then she had a voice as a composer. It wasn’t until several years in that I knew there was this other side.”

There was a third side to her artistry as well: teaching. Shortly after graduating from Juilliard, she joined Community MusicWorks in Providence, R.I. — inspired in part by her own education at the Third Street Music School Settlement in New York, and by her mother’s community-based practice.

“I use the word rigor a lot, but I think the thing that makes anything valuable is the amount of rigor, the amount of focus. The amount of energy that you’re putting into it is the thing that really counts,” she said. With that guiding her, she added, “I watched kids’ lives in some cases change from really, really challenging situations to — you know, five or six of the students were the first in their family to go to college, and some of them to Ivy Leagues. It was intense, but beautiful.”

Throughout her career, Montgomery has tried — with mixed success for her sanity — to balance pedagogy with performance and composing. She was a founding member of the chamber group PUBLIQuartet and later joined the Catalyst Quartet.

“When Jessie joined, it felt like Catalyst became what we always envisioned it to be,” said Karla Donehew Perez, a fellow violinist in the group.

Catalyst became a sounding board for Montgomery’s writing. For the 2015 album “Strum: Music for Strings,” the group recorded some of her most widely played works: the spirituals-inflected “Source Code”; the vivid “Strum”; and “Banner,” which deconstructs and builds on the American national anthem. With Imani Winds, the quartet also premiered the nonet “Sergeant McCauley,” about one of Montgomery’s great-grandfathers and the Great Migration.

Together, the Catalyst players also undertook major projects — most recently, the series “Uncovered,” which devotes albums to composers who have been overlooked because of their race or gender. But Montgomery felt increasingly unable to devote the time the quartet needed from her, which she described as “24/7, 365 attention.”

“That doesn’t feel balanced within the quartet,” she said, “especially when they’re performing my pieces and I’m reaping the benefits of that.”

Last year, Montgomery announced her departure from Catalyst — a difficult decision that made for a tense conversation. “It’s not a fully repaired relationship,” she said, “but it’s mostly repaired.” (Donehew Perez said that Montgomery is like a family member to her, and remains “a great, lifelong friend.”)

Montgomery continues to perform, including as part of her improvisation duo Big Dog Little Dog, with the bassist Eleonore Oppenheim. She also played her music in the Pam Tanowitz dance premiere “I was waiting for the echo of a better day” this summer and has a new collaborative project in the works, with exploratory rehearsals beginning in September.

But the bulk of her work in the future — with commissions currently planned until 2024 — will be her writing, which with its improvisatory spirit, embrace of widely varied influences and preoccupation with personal history reflects her upbringing.

“I have this idea in my mind that there’s something beyond fusion,” Montgomery said. “There’s this other sound I’m going for that is a culmination, like the smashing together, of different styles and influences. I don’t know that I’ve achieved that yet.”

Observers might disagree; the composer Joan Tower described Montgomery’s music as having “a real confidence” and a blend of references that “intertwine in a cohesive way.” And Alex Hanna, the Chicago Symphony’s principal bass, noted the “richness in sonority and color” in her scores.

“You have the feeling she wrote the music in an afternoon,” he said, “because it has the honesty of improvisation.”

Works like “Source Code,” “Sergeant McCauley” and the recently premiered “Five Freedom Songs,” written for the soprano Julia Bullock, reflect the fact that Montgomery is “a multiracial person living and breathing and telling stories that are quintessentially American,” Dworkin said.

“Banner,” she added, is a “shining” example. “There is music in there that borrows from the Mexican anthem, Puerto Rico, blues and jazz idioms galore. That’s American music, and American history.”

But trying to capture the soul of a country in music is a level of pressure that Montgomery tries to avoid when considering a new commission. She said she doesn’t see her works as particularly political.

“I think people sometimes consider Blackness or a projection of Blackness as a political statement, that to be Black is to in yourself embody politics and culture,” she said. “And that’s a burden, actually.”

A burden that’s been especially acute during the past year. “I’ve been talking with my colleagues of Black descent, and we’re all feeling that sort of thing of being put on,” she said. “I’ve been realizing that there’s this shared desire to just be able to create without that kind of pressure or expectation that you’re going to be the spokesperson for the race or for classical music being better or more diverse or whatever.”

She would like to see programmers not just hiring Black artists, but doing so in a thoughtful, flexible way. “A commission that addresses the injustices on Black people, as a way for the institution to admit or confront their own compliance in the atrocities against Black people, doesn’t allow that composer to express total joy, for example,” she said. “It boils down to the simple fact that Black people — any people, probably — want to own our own narrative, and not necessarily be put on to be responsible for undoing institutional crimes.”

In her own music-making, Montgomery is more interested in supporting her peers through her actions — whether as a curator, performer or pedagogue — rather than public statements.

“I think the work shows what you want to show,” she said. “And that’s what’s important. The work comes first, and then the declarations come later.”