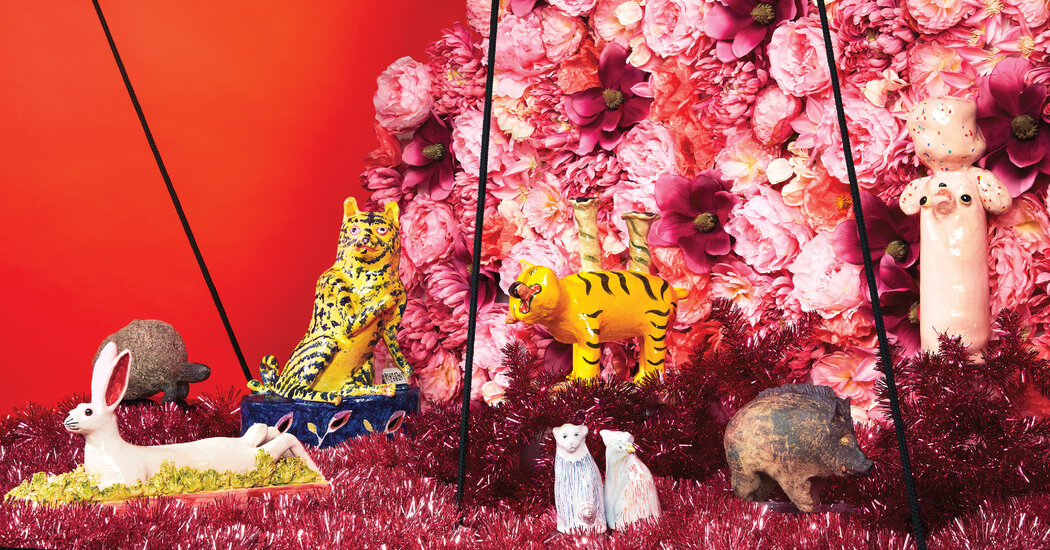 The Corfu, Greece-born, London-based ceramist Agalis Manessi, 69, creates her animals — recumbent hounds, alert hares — from lumps of terra-cotta clay that she squeezes and manipulates “until a figure emerges.” Her technique is the centuries-old majolica, in which she fires her creatures and then dips them in a tin oxide glazing solution that lends an opaque white finish. She then paints the figures with a mixture of metal oxides — cobalt, manganese, copper — that yields gentle but sometimes unpredictable hues after a second firing. The entire process, from sculpting to drying to glazing to firing, can take over a month for a single piece. “It is,” she says, “an extremely unforgiving process.”

But for some animal-obsessive ceramists, anthropomorphizing as a sculptural approach is a zany (and speedy) joy. Katie Kimmel, 30, who has a studio in the Mojave Desert two and a half hours northeast of Los Angeles, is endlessly inspired by the slapstick interaction between her St. Bernard and two Chihuahuas. She makes hand-built vases, some of which have goofy dog faces, and wall-hanging baby animal figurines: poodles, ducklings, pugs. She underscores their crude, youthful insouciance by using commercial clays and glazes found in paint-your-own-pottery shops at the mall — they take just an hour or two to sculpt.

Similarly, the 48-year-old Japanese potter Kouichi Maekawa believes that working rapidly creates a more spontaneous figure that captures an animal’s quick-twitch verve. From his studio in Shigaraki, in Shiga Prefecture (he recently took over management of the family earthenware business, but spends much of his time on his own pieces), he is able to work almost as fast as a balloon artist at a children’s party. Using soil from a nearby mountain, still laden with bits of hay and grit, he fashions figurines based on the local wildlife: boars, owls, monkeys, foxes. He glazes them with natural mineral pigments, resulting in a muted palette that contrasts with the creatures’ chunky whimsicality, a characteristic that is, perhaps, the unifying force of this new coterie of figurine sculptors: They strive to make something raw and natural that illuminates the inner life of both animals and humans. “I try to capture the moment something is born,” says Maekawa. “Not literally, but the moment that they burst into the world and make themselves known.”