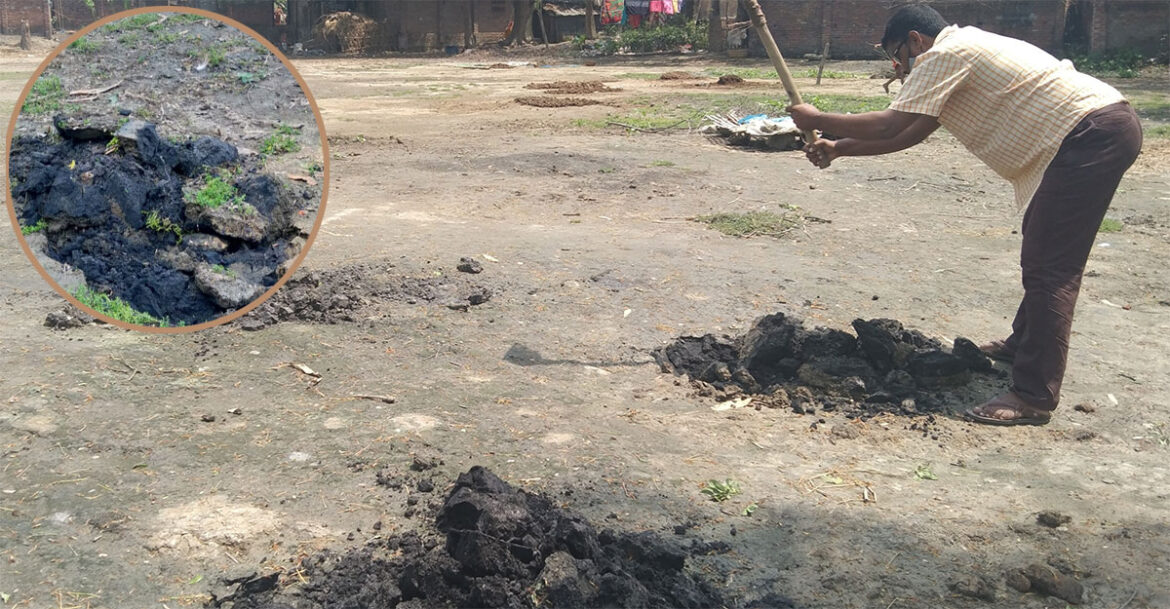 Chapainawabganj Sadar Upazila Parishad has allocated Tk. The talk was to fill a football field and build a boundary wall.

Earlier, an allocation of Tk 2 lakh was also given in the 2019-20 financial year. At that time there was talk of filling the football field and constructing the boundary wall in the same place. A total of four lakh taka project has also been completed.

But when you go to the spot and see the work of filling the football field worth four lakh rupees and the construction of the border wall, you will see that it is Kororai.

Although the work on the two projects was completed a long time ago, not a single brick was found there. Even though the hole was supposed to be filled with soil, about half of the total boundary has been filled. Again with the abandoned ashes of the Autorice Mill instead of the soil.

It is learned that the two projects were approved in the name of Sadar Upazila Mahila Vice Chairman Nasrin Akhtar. A total of Tk 4 lakh was allocated for the two projects for filling up of Ghughudima Sluicegate football ground and construction of boundary wall in Gobaratla union of Sadar upazila.

Locals say about 150 to 200 tractors have dumped abandoned ashes in a hole at the west end of the Sluicegate football field in the last two years. Even the Union Parishad has recently given ashes to the workers with a 40-day program. So that the ashes cannot be seen from above. The soil has been spread on the ashes in such a way that it looks as if it has been filled with soil.

The reporter requested the locals to hit the ground with a spade to match the truth of this allegation. Then ash comes out from four to five inches below the ground.

Masum Ali, a young man from Ghughudima village, said, “I have seen local boys playing in this field since birth. But there were some holes in the side of the field. It used to hold water all year round. Nasreen Akhtar, the female vice chairman, started the work of filling the hole with the allocation from the upazila. It is being filled with ashes from the beginning. However, we do not know the amount of government allocation.

On condition of anonymity, a local farmer said, “I have heard from the Upazila Parishad that work is being done to fill the hole in the playground with government allocation.” I don’t know, any government allocation is made with abandoned ashes. Again the soil is sprinkled on top to cover the ashes. The ashes of the Autorice Mill at Atahar in Sadar Upazila will be discarded if the tea costs 50 to 100 rupees.

Admitting the matter, Vice Chairman Nasrin Akhtar said that the boundary wall was not given there due to the ban imposed by the Upazila Project Implementation Officer. However, most of the holes have been filled with ashes. Because there were many big holes in the side of the field. Even the drivers have been paid 100 rupees per tractor to take the ashes. Large holes have therefore been given to the soil as well as the ashes. If necessary, more places will be filled with soil now, he said.

However, locals said that there was a hole 3 to 5 feet deep on the west side of the football field in an area of ​​about 150 feet.

Upazila Project Implementation Officer Moudud Alam Khar visited his office and asked him about the construction of boundary wall of Sluicegate football field and the project of filling holes. He asked him to apply for the Right to Information Act.

Sadar Upazila Nirbahi Officer (UNO) Iffat Jahan told Dhaka Post that there was no information about the Sluicegate football field filling and construction of the boundary wall. Necessary steps will be taken with the inquiry.