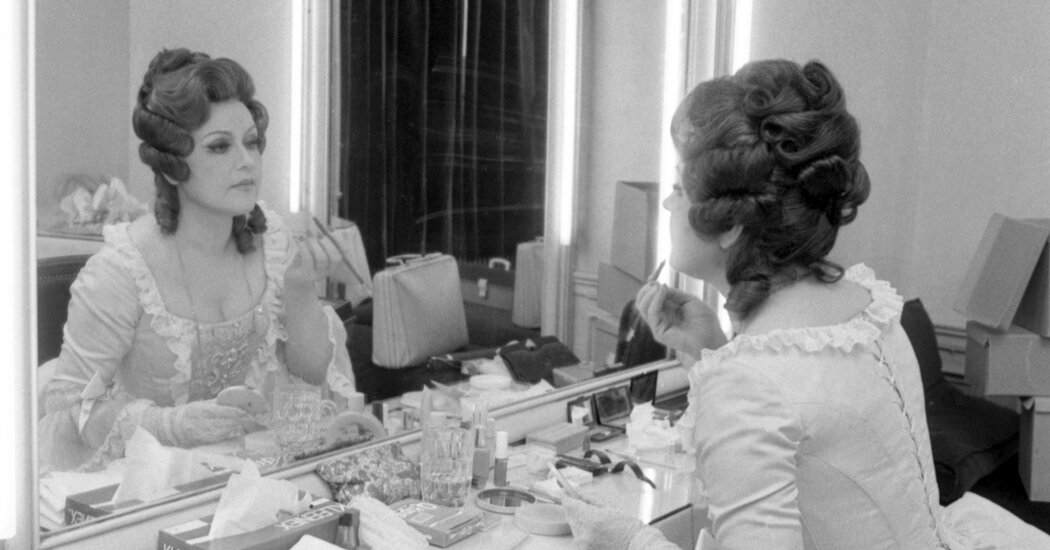 Teresa Zylis-Gara, a Polish soprano who displayed a plush voice, impressive versatility and beguiling stage presence during a three-decade international career that included a stretch at the Metropolitan Opera during her prime in the 1970s, died on Aug. 28 in Lodz, Poland. She was 91.

Her death was announced by the Polish National Opera.

In her early years, Ms. Zylis-Gara was essentially a lyric soprano who excelled in Mozart and other roles suited to a lighter voice. But as she developed more richness and body in her sound, she moved into the lirico-spinto repertory, which calls for dramatic heft along with lyricism, including the title role of Puccini’s “Tosca,” Tatiana in Tchaikovsky’s “Eugene Onegin” and Elisabeth in Wagner’s “Tannhäuser.”

Her repertory ranged from the Baroque, including works by Claudio Monteverdi, to 20th-century fare by the Polish composer Krzysztof Penderecki. She also championed the songs of her countryman Chopin, works that had been surprisingly overlooked.

To some opera fans and critics, Ms. Zylis-Gara’s voice, though beautiful, lacked distinctiveness. And in striving for refinement, she was sometimes deemed overly restrained. Peter G. Davis of The New York Times described this mixture of qualities in a mostly glowing review of her performance as Pamina in Mozart’s “Die Zauberflöte” at the Met in 1970.

Her “cool, silvery voice does not possess a wide range of color nor any special individuality,” Mr. Davis wrote, “but it is a lovely thing to hear in itself, and she sculpted Mozart’s melodies gracefully and stylishly.” In addition to “naturally feminine warmth and charm,” Mr. Davis said, she “interjected a pleasant note of humor into her early scenes and a genuine tragic pathos later on.”

Two years later, reviewing a Met production of Verdi’s “Otello” presented on tour in Boston, the critic Ellen Pfeifer wrote in The Boston Globe that Ms. Zylis-Gara’s Desdemona was “a spirited and mature young woman instead of the usual adolescent clinging violet.” Her singing, Ms. Pfeifer added, “was beautiful, ample in size, with the requisite transparency and flexibility.”

In a revealing 1974 interview with The Atlanta Constitution, Ms. Zylis-Gara spoke about the risks of being too emotional in performance. At the time, she was in Atlanta to sing the title role of Puccini’s “Madame Butterfly,” and she recalled crying onstage during one particularly intense scene while performing the role as a student.

“It was terrible,” she said. “When you cry you can’t sing. Since that time I’ve never allowed myself to get this far, but it’s still a danger for me.”

Teresa Geralda Zylis was born on Jan. 23, 1930, in Landwarow, Poland, now Lentvaris, Lithuania, near Vilnius. She was the youngest of five children of Franciszek and Jadwiga Zylis; her father was a railway worker, her mother a homemaker.

After the postwar political reconstitution of the region, the family settled in Lodz, Poland, in 1946. The 16-year-old Teresa decided to devote herself to singing and began nine years of study with Olga Ogina.

She won first prize in the 1954 Polish Young Vocalists Contest in Warsaw, which led to engagements with Polish National Radio and, in 1956, her professional debut with the Krakow Opera in the title role of “Halka,” by the 19th-century Polish composer Stanislaw Moniuszko, a staple of the Polish opera repertory. Further prizes during the next few years in Toulouse, France, and in Munich led to engagements with opera houses in Oberhausen, Dortmund and Düsseldorf in West Germany.

Determined to advance her career, she made professional decisions that affected her personal life, as she explained in the 1974 interview.

She had married Jerzy Gara, the director of a technical school in Lodz, in 1954. The next year their son, also named Jerzy, was born. But it proved “impossible to be a wife, mother and artist of international fame all at one time,” she said.

“I chose to be the artist,” she added. “I accept my choice and everything that has happened in my private life as a result.”

When her son was 6, she left him in the care of her own mother in Lodz and settled in Germany to pursue her career, which quickly prospered. (Her marriage ended in divorce.)

“It is something special to have a talent,” she said. “It brings a responsibility with it.” She added, referring to her son, “I saw sometimes he was not happy; and this is difficult.”

He survives her, as does a granddaughter.

Ms. Zylis-Gara had a significant breakthrough in 1965 when she sang an acclaimed Octavian in a production of Strauss’s “Der Rosenkavalier” at the Glyndebourne Festival in England, which led to her debut with the Paris National Opera the next year. In 1968, a banner year, Donna Elvira in Mozart’s “Don Giovanni” became her calling card — or, as she put it in a 1969 interview with The Los Angeles Times, her “destiny role.” She sang Elvira for her debuts at the Salzburg Festival (with Herbert von Karajan conducting), the San Francisco Opera and, in December, the Met.

At the Met, the cast included the formidable Cesare Siepi as Giovanni and Martina Arroyo as Donna Anna. In a 2015 article in Opera News in which various opera professionals were asked to pick their favorite “diva debuts” at the Met, Ms. Arroyo chose Ms. Zylis-Gara’s Donna Elvira. “She sang so well, a pure voice just right in style — one of the very best Elviras,” Ms. Arroyo said.

The Met’s general manager, Rudolf Bing, promptly engaged Ms. Zylis-Gara for future bookings. She went on to sing 232 performances with the company over 16 seasons, taking on 20 roles, including the Marschallin in “Rosenkavalier,” Wagner’s Elisabeth and Elsa (in “Lohengrin”), Puccini’s Mimi, Butterfly and Desdemona, and Tchaikovsky’s Tatiana.

Through the 1980s, Ms. Zylis-Gara continued to sing in the world’s major houses. In later years, she divided her time between a home in Monaco and visits to her native land, sat often on competition juries, and eagerly taught emerging singers. Asked in a 2009 Opera News interview whether she would ever say farewell to opera, she asserted that this “would never take place!”

“The stage lights won’t dim for even a second,” she said, “since I transmit to my gifted pupils all my artistic soul, my knowledge and my experience.”