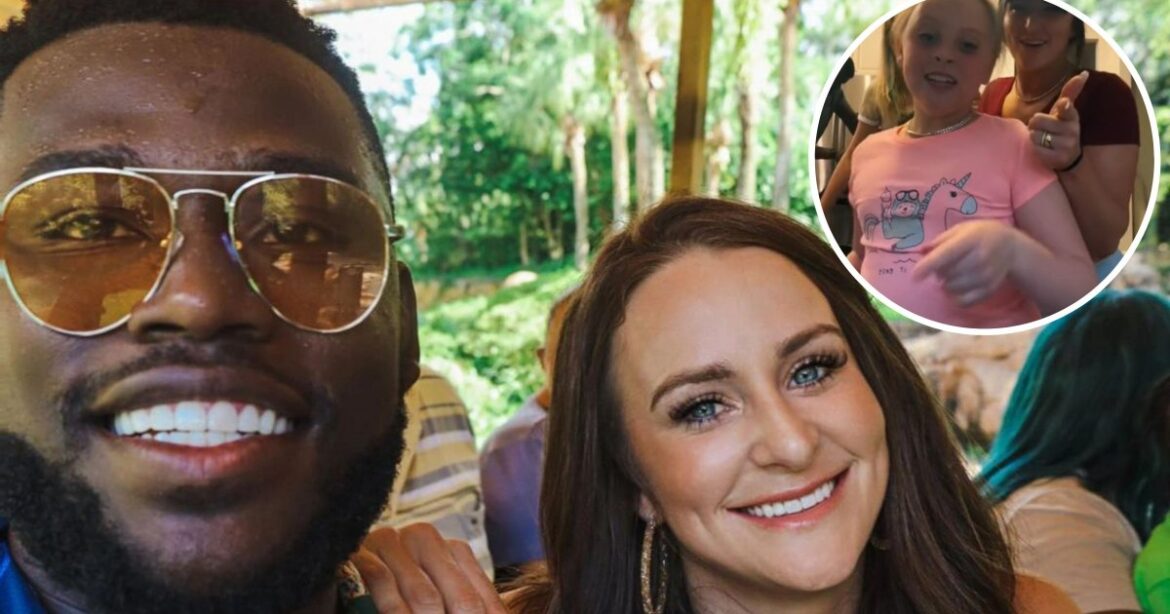 Not in his house! Teen Mom 2 star Leah Messer and daughters Aleeah “Gracie” Simms and Adalynn Calvert were swiftly stopped from making a TikTok dance video when Leah’s boyfriend, Jaylan Mobley, stepped in to put his foot down.

The reality star, 30, shared the hilarious video clip of herself dancing in the living room to the viral TikTok mix “Cool for summer x Pony” by Kuya Magik to the social media app on Saturday, August 13. The mother of three was seen wearing a pair of gray workout shorts and a crop top while Addie, 9, stood directly in front of the camera in denim shorts and a pink T-shirt with a unicorn pool floatie on the front. Gracie, 12, towered over her mom and sister as she stood in the back rocking blue streaks in her hair.

As the trio rocked their bodies to the lyrics, “Got my mind on your body and your body on my mind,” Jaylan rushed over to grab the phone away. “No, no, no,” he mouthed with an ear-to-ear smile on his face as he shook his finger in front of the camera.

Fans of the Teen Mom star – who shares Addie with ex-husband Jeremy Calvert and twins Aliannah and Aleeah with ex-husband Corey Simms – flooded the comments section of the post with praise towards her beau.

“That a man. Protect your girls at all cost!! He’s a keeper Leah!!” one follower wrote with a pair of crying laughing emoji. “He’s like absolutely nottttttt,” another added. “He was minding his own business and everything but as soon as that beat dropped, it was an automatic NO for him,” yet another fan wrote.

In the same video the Hope, Grace & Faith author was spotted by eagle-eyed fans wearing what appeared to be an engagement ring and wedding band on her left ring finger.

“Do I see a ring on ‘that’ finger?!?!?” one fan commented with a blushing emoji. “Watched a few times [and it] looks like she’s married. I see a wedding band and diamond,” another chimed in.

Though the pair have yet to comment on the engagement rumors, the pair are coming up on their one year anniversary after making things official during a romantic getaway in August 2021.

“We officially became exclusive during our trip to Costa Rica, when Jaylan asked me to be his girlfriend over a sunset dinner! It was perfect!” Leah told Entertainment Tonight in September 2021. “This makes [it] nearly a month, but we are excited to see what the future holds.”