The Taliban fighters exploded in joy as US forces left Afghanistan. They marched on the tarmac of Kabul airport, the western soldiers’ last foothold until August 31, and even fired in the air to express their joy. 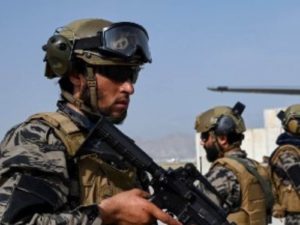 But, just a few days later, everything has changed.

According to Al Jazeera, the Taliban have stated that they “felt betrayed” since Americans destroyed military helicopters and planes before leaving Kabul.

The rebels stated that they anticipated the Americans to leave helicopters intact for their use. “We believe it is a national asset and we are the government now and this could have come to great use for us,” the report quotes the militant group as saying.

The Kabul airport was littered with pullout artefacts early Tuesday. There were piles of clothes, baggage, and paperwork strewn about the station. A hangar housed several CH-46 helicopters utilised by American forces. Before leaving, the US military says it crippled 27 Humvees and 73 aircraft.

The Taliban now have 48 aircraft, though no information on how many of these are operational is known.

According to Taliban spokesman Zabihullah Mujahid, their technical experts are “repairing and cleaning” the airport and have recommended civilians to avoid the region for the time being.

For the time being, the Taliban appear to be focused on resuming operations in Afghanistan, a mission that may be difficult for fighters who have spent the most of their life fighting an insurgency in the countryside.

With its last troops gone, the US ended its 20-year war with the Taliban back in power. Many Afghans remain fearful of their rule or of further instability, and there have been sporadic reports of killings and other abuses in areas under Taliban control despite the group’s pledges to restore peace and security.

The U.S. and its allies invaded Afghanistan shortly after the Sept. 11, 2001, terror attack on the United States, which al-Qaida orchestrated while sheltering under Taliban rule. The invasion drove the Taliban from power in a matter of weeks and scattered Osama bin Laden and other top al-Qaida leaders.

The US and its allies launched an ambitious effort to rebuild Afghanistan after decades of war, investing billions of dollars in a Western-style government and security forces. Women, who had been largely confined to their homes under the Taliban’s hard-line rule, benefitted from access to education and came to assume prominent roles in public life.

But the Taliban never went away.

In the coming years, as the US focused on another troubled war in Iraq and the Afghan government became mired in corruption, the Taliban regrouped in the countryside and in neighboring Pakistan. In recent years, they seized large parts of rural Afghanistan and carried out near-daily assaults on Afghan security forces.

Eager to end the war, the Trump administration signed a peace deal with the Taliban in February 2020 that paved the way for the withdrawal. President Joe Biden extended the deadline from May to August and continued with the pullout despite the Taliban’s rapid blitz across the country earlier this month.

Now the Taliban control all of Afghanistan except for the mountainous Panjshir province, where a few thousand local fighters and remnants of Afghanistan’s collapsed security forces have pledged to resist them. The Taliban say they are seeking a peaceful resolution there.

They face much graver challenges now that they govern one of the poorest and most war-ravaged nations on Earth.

With inputs from the Associated Press.