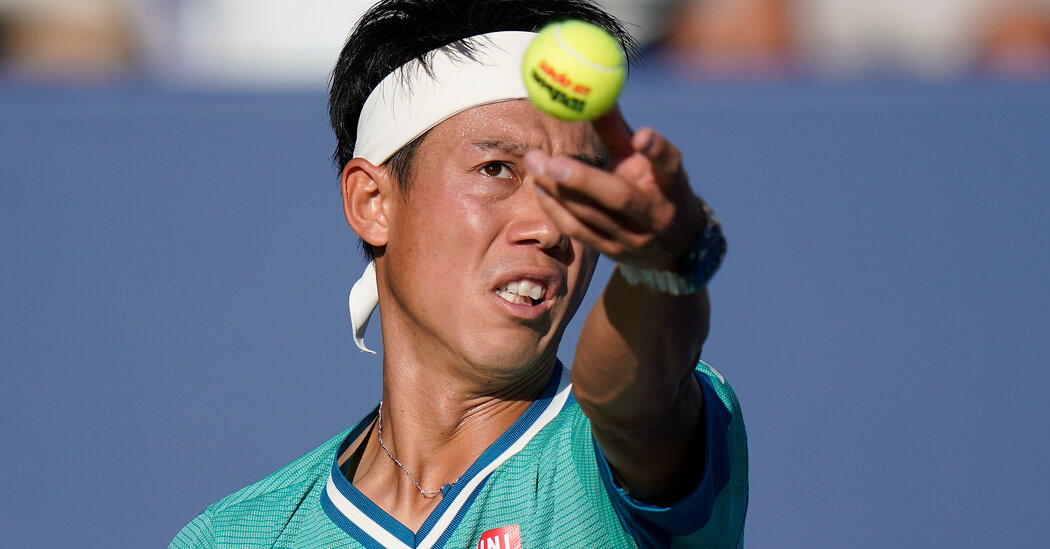 It was one of the most famous retorts in tennis history, a perfectly executed overhead slam of a quote from the self-deprecating prince of the tour, Vitas Gerulaitis. Going into his match against Jimmy Connors at the 1979 Masters, Gerulaitis had lost 16 straight matches to the lefty, but pulled off the upset at Madison Square Garden.

“Let that be a lesson to you all,” he told reporters afterward. “Nobody beats Vitas Gerulaitis 17 times in a row!”

Forty-two years later, Kei Nishikori finds himself in a similar spot, hoping that he could mimic that quintessential sports one-liner. Just like Gerulaitis with Connors, Nishikori has lost his last 16 matches to Novak Djokovic, Nishikori’s upcoming opponent in the third round of the U.S. Open on Saturday.

Oh, Nishikori, who is from Japan, says he embraces the challenge, all right. But he doesn’t take us for fools, either. No one wants to face the best player on the planet — perhaps the best player of all time, who is only five matches from becoming the first man to win a Grand Slam since Rod Laver in 1969 — in the third round.

“I’d rather have someone ranked lower,” Nishikori said.

Over all, Djokovic is 17-2 against Nishikori, with the most recent win a straight-sets victory at the Olympics in Tokyo last month. But there is something about that 16-0 marker that seems to elicit punch lines from players. When asked Thursday night if he has Nishikori’s number, Djokovic paid homage to Gerulaitis’s comedic genius when he nodded and agreed.

“I actually do,” Djokovic said.

What’s this? A blatant burst of bravado bordering on disrespect toward an opponent? It would be unsportsmanlike, and out of Djokovic’s playbook to claim he has another player’s number. But before anyone could put Djokovic’s brash proclamation on Twitter, he reached back as if to grab something and added, “in my phone.”

Get it? He’s got Nishikori’s phone number, just in case he wanted to text his upcoming opponent something along the lines of, “Sweet 16,” or “See you on court for No. 17!”

Instead, Djokovic flashed his humble side. Rather than providing bulletin board fodder, he lavished Nishikori with praise.

“I don’t have anyone’s number on the court until I win,” Djokovic said and added, “He’s one of the quickest and most-talented players that I’ve seen in my lifetime, in my career.”

Despite the one-way flow of traffic in this pairing, there is one aspect to the streak that bears noting. It started after Nishikori beat Djokovic in their most marquee encounter, the semifinals of the U.S. Open in 2014. Nishikori dispatched Djokovic, who was ranked No. 1 then, by 6-4, 1-6, 7-6 (4), 6-3, before he went on to lose to Marin Cilic in Nishikori’s only major final.

“I think it was one of my best matches,” Nishikori said of the win over Djokovic. “Because of that, I think it’s a little better feeling that I have, playing here. I mean, even though he’s the best player, I have good memory here playing the U.S. Open and beating him before here.”

The only other time Nishikori beat Djokovic was in 2011, at Basel in Switzerland, in their second meeting. No other player has dominated Nishikori the way Djokovic has.

But believe it or not, Djokovic’s streak against Nishikori is not his best. He holds a 17-0 advantage against Gael Monfils over all (apparently, someone does beat Monfils 17 times in a row). Djokovic also holds 14-match winning streaks against Cilic and Stan Wawrinka, according to the ATP.

But Djokovic, while terrific, is not perfect. Nishikori said the key to beating him is achieving the right balance of patience and aggression. He recalled that when he won in 2014 he was very aggressive.

“I have to stay patient,” he said. “I still have to play great tennis to beat him. Same time, I have to be aggressive. He’s not going to give me any free points, so I have to earn the points. Being aggressive is the key.”

If he sounds a little bit muddled on the subject, he can be forgiven. It’s a daunting task. Nishikori is not only trying to beat the No. 1 player, who has defeated him 16 consecutive times. He is also trying to stop Djokovic from attaining immortality.

If Djokovic wins the U.S. Open, he will not only become the first player, man or woman, to win a Grand Slam since Steffi Graf in 1988, he will also break the three-way tie among him, Federer and Nadal, with a record 20 career major titles.

Perhaps the pressure will work on Nishikori’s favor. Perhaps he will become the Roberta Vinci of the 2021 U.S. Open. Vinci got in the way of Serena Williams’ quest for a Grand Slam, beating her in a semifinal at the 2015 U.S. Open. Williams had won all four of their singles matches heading into that day, and she and her sister, Venus, had beaten Vinci in a doubles match, too.

But the Italian player turned upstart and spoiled the party. Nishikori was asked if the pressure that is mounting on Djokovic could help him to play spoiler, too.

“Yes,” he said while leaning back with a sly smile.

It was not exactly a line worthy of Gerulaitis’s hall-of-fame retort. But for the understated Nishikori, there was definitely humor in it. The real question may be: Can anyone beat Kei Nishikori 17 times in a row?