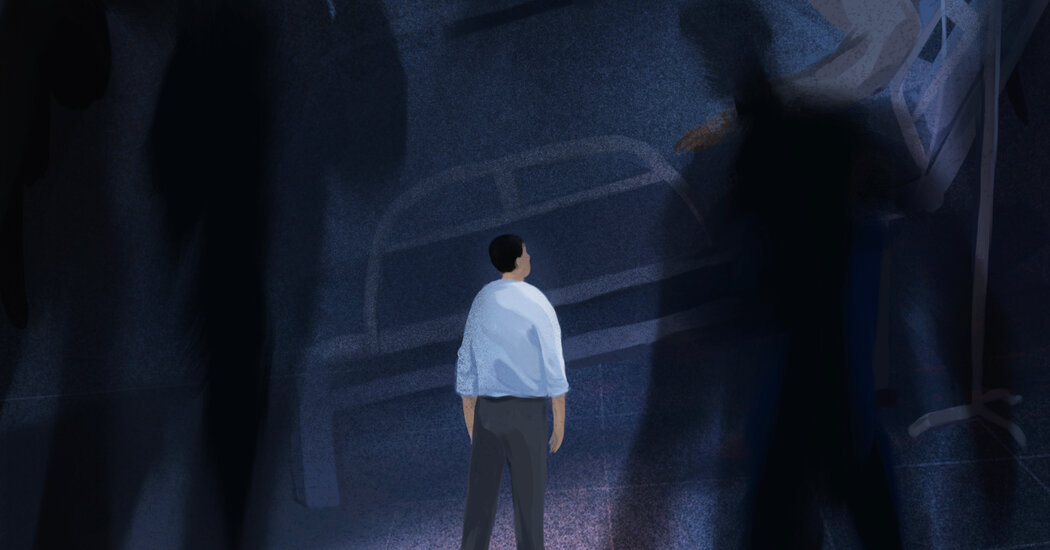 The term “Kafkaesque” gets overused, but it’s hard to imagine another word that so thoroughly captures the dynamics in the Taiwanese writer Lo Yi-Chin’s “Faraway”: a traveler navigating a country that maintains, as a matter of policy, that his own country doesn’t exist. After embarking on a group tour of mainland China, the narrator’s elderly father has a brain hemorrhage in the hotel shower. Lo’s novel tracks the agonized fragmentation of those days — driving back from a vacation in Taiwan’s eastern mountains with his toddler and heavily pregnant wife in tow, picking up his mother in Taipei, then flying with her to the shoddy Jiangxi hospital where his father is trapped — in a blitz of convenience-store receipts, fumbled border crossings and belligerent taxi drivers. The narrator, who shares Lo’s name, feels cut off from China by a “glass wall of incomprehension.”

The city outside is a surreal mirror world, filled with fake cigarettes, counterfeit bottled water and oddly aggressive medical personnel. There’s even a mirror-world family, unfamiliar cousins and a brother, Yiming, “this man in his 50s who’d been abandoned by my father as a small child,” punished all his life for being the son of a man he didn’t know. Yiming was left behind in 1949, when his father joined the wave of Kuomintang members who fled for Taiwan. People speculate darkly that meeting with Yiming triggered his father’s hemorrhage. What did he say? Lo’s mother wonders.

“This is practically a fable,” Lo writes. “How could I recollect such a trip as merely a record of travel?” And it isn’t, not in the traditional sense. The journeys that take place, through space and memory, revolve around the fixed point of his father’s prone body. And while Lo hints that “Faraway” draws heavily from his own experiences, it isn’t really a memoir either. Like Kenzaburo Oe, Lo has produced a work of autofiction that also functions as critical discourse. A simple train ride is less a single plot point than a thread that conveys us through cultural history: Tarkovsky and Borges, Chekhov and Italo Calvino. The hotel where he stays with his mother recalls “the many novels in which travelers are forced, for whatever reason, to remain at fancy hotels.” A hospital banner offering “A Warm Welcome to the Three Gorges Migrants” reminds him of Foucault’s “History of Madness.”

Though darkly funny, this is painful reading. The doctors, despite repeated bribes, refuse to airlift his father to Taiwan, or even to a marginally better hospital; the insurance company approves and then delays the airlift through “a rotating roster of women with changing surnames” who unmake one another’s promises. Medical haggling is interwoven with tearful arguments with his mother and squabbles with his mainland family over the brand-name wet wipes Lo buys for his father. It’s an absolute nightmare, punctuated by his father’s near-constant diarrhea and hotel workers asking if Lo would like to try “their very own brand of mooncake.” The kicker is that Lo doesn’t particularly like his father, who’s vaguely terrorizing and often unkind.

While much admired in Taiwan, Lo’s novels haven’t previously been translated to English, and “Faraway” makes for an uneven debut. It can feel frustratingly like an unedited diary; it’s not uncommon to find a long disquisition on the relative prices of fruit. But Lo’s language, beautifully translated by Jeremy Tiang, is a life raft in the chaos, images burned in the mind: motorboats “slicing white scars through the water,” or a stylish taxi driver who looks “like a capable and rather windswept divorcée.” By the end, Lo is eager to forget the whole tortured affair. For a reader, it’s harder to erase.