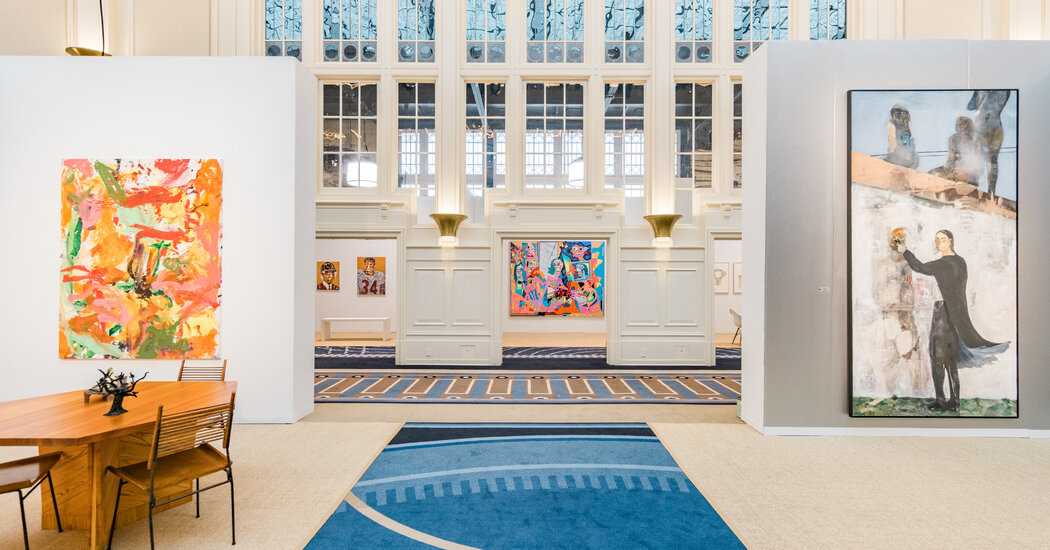 Coming up in the ’90s, “independent” (often shortened to “indie”) signaled culture that was maverick, authentic and relatively low budget. It meant movies that weren’t Hollywood-blockbuster types and music not released on corporate record labels. And while art didn’t necessarily follow the same ethos, or economic model, the Independent Art Fair, founded by fellow Gen-Xers Elizabeth Dee and Matthew Higgs, kind of felt like it did.

This year, its 12th, is no exception. Still keeping an eye out for overlooked and underrepresented galleries and artists, the Independent is featuring 43 galleries and approximately 100 artists, with lots of women, nonwhite and a few self-taught artists. The quality of the work is exceptional and ranges from painters right out of art school to artists long known to collectors and museums. Solo and duo booths are the norm, making the fair feel like a series of small exhibitions rather than a commercial bazaar. There is also an online component up through Sept. 26, with videos, podcasts and interviews.

And yet, lodged in a posh downtown Cipriani inside the Battery Maritime Building, the Independent could hardly be called edgy. More Sundance than the garish Oscars, it’s an exceedingly pleasant way to re-enter the art world after being battered by hurricanes, politics and pandemics. Here are some highlights.

In a fair that is heavy on painting, Leilah Babirye’s ceramic sculptures of heads and faces festooned with found objects are a wonderful counterpoint. Babirye was born and raised in Uganda, and the ceramics hark back to masks and ceremonial costumes — but with braids or other details affecting their surfaces. Behind these on the wall are Gerald Jackson’s simple, abstract geometric paintings, which belie a career spanning decades.

It’s easier to reach Mrs. gallery at the Independent than to travel out to its home in Maspeth, Queens — although this small gallery is worth the effort. Here, Mrs. is showing paintings by the Los Angeles artist Hana Ward — her first appearance in New York —- of Black women in rich, warm settings. The paintings aren’t portraits, per se, but rather attempts to think about consciousness and moods. Henri Rousseau’s dreamy landscapes and solid figures come to mind.

Animals dominate the two-dimensional works of Maija Peeples-Bright at the Parker Gallery in Los Angeles. Paint, glitter, thread and plastic gems are some of the materials in the work of this artist, who was born in Latvia and was part of the Northern California Funk Art movement in the ’60s and ’70s, which pushed back against austere abstraction and minimalism. Color is one of Peeples-Bright’s best attributes, but there is a cuteness and sweetness to her work that feels almost radical.

Jameson Green graduated recently from the M.F.A. program at Hunter College, and the boxy figures and angular compositions in his works clearly recall the politicized paintings of Jacob Lawrence and Philip Guston. Black figures picking cotton, migrating with the birds, or wearing hoods with nails — a seeming mash-up of Guston’s hooded figures and Central African nkisi power figures with nails driven into them — offer an update on the situation of racism in America. The paintings also recall the look of prints by Elizabeth Catlett, another towering figure in African-American art, so history and art history — and remixing and remaking — are as much the subjects here as racism and its deleterious effects.

Justine Kurland is known for her dreamy, enigmatic photographs of girls and women — and later, people occupying quiet evocative landscapes. Here, she has dismantled her library of photography books and made collages that are often funny and provocative. Given that the canon of photography — like painting — was filled with many white men photographing women’s bodies, she has literally reconfigured the canon. In one collage, the name “Lorena” is spelled out: that is, Lorena Bobbitt who cut off her husband’s penis, if you need the association with women, scissors, and patriarchy spelled out for you.

This fair skews very analogue, rather than tech, except for the booth at Lisson, which has flashing screens, software and media interventions by two digital pioneers: Cory Arcangel and JODI, the Dutch duo of Joan Heemskerk and Dirk Paesmans, who have been making internet art since the ’90s. Thinking about the rise of NFTs (nonfungible tokens), the artists hark back to earlier forms of digital art, using old software, in some cases, but also requiring viewers to employ their phones to gain access to some of the work.

The bright, colorfully abstract canvases of the Spanish artist Jorge Galindo look like they could’ve been made decades ago. They’re recent, though, inspired by the flower arrangements and still lifes of Henri Fantin-Latour (even if they also conjure Joan Mitchell’s abstract canvases). Vito Schnabel is the son of famed ’80s painter and later film director Julian Schnabel, and his taste in artists often follows his father’s bombast and verve. Galindo met the older Schnabel when Julian was teaching a workshop at the Círculo de Bellas Artes in Madrid in the early ’90s, so the association is even closer than just aesthetic: The two have remained friends.

Now that art fairs are appearing in late summer and fall, there are the inevitable “back to school” comparisons. Robert Barber at Kerry Schuss fits in perfectly with that mind-set. In addition to his ’60s “Monsoon Paintings” — blocks of color laid out around rough grids and inspired by the rainy season in Tucson, Ariz., where he lives — Barber created works on paper. Actually, he was a schoolteacher and used assignment paper printed with sections for filling in names and grades as his canvases. Simple, gestural patches of color, they echo Abstract Expressionism but these works also channel the student rebelling against the structure of assignments, or school itself.

Thursday through Sunday at Cipriani South Street at the Battery Maritime Building, Manhattan; independenthq.com. All guests will be required to wear masks and present proof of vaccination at the door to gain entry to the fair.