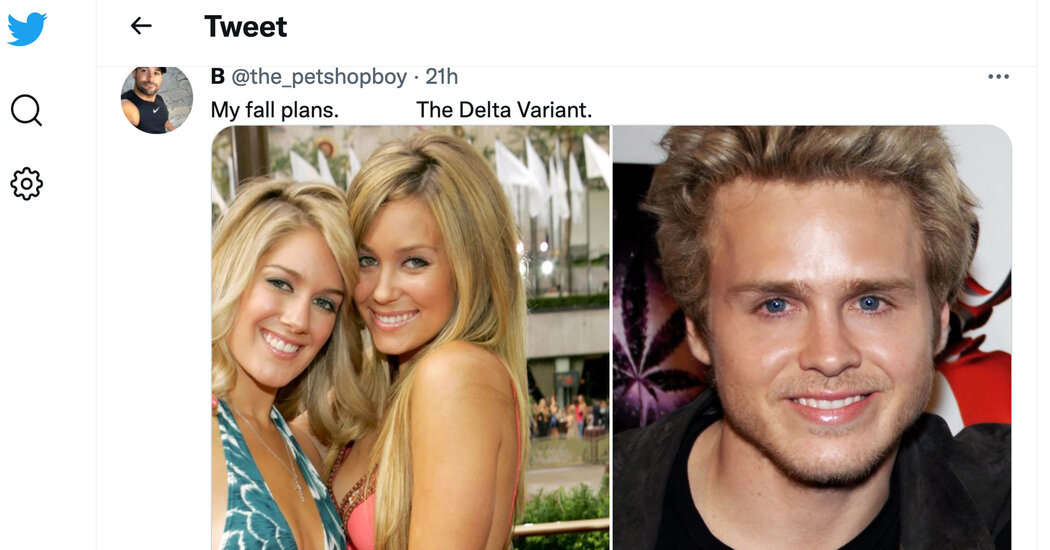 When Spencer Pratt, a star of MTV’s “The Hills,” saw he was cast as the Delta variant of the coronavirus in a meme spreading across social media, he thought it was entertaining but also misleading.

“It’s fun for you to be a meme, but if they rewatch the show they’ll really see who the Delta variant is,” Mr. Pratt said in a text message on Thursday.

The meme — “my fall plans” vs. “the Delta variant” — pairs a picture of a fun, carefree or even neutral scene (fall plans) with an image of a saboteur (the Delta variant). In Mr. Pratt’s case, the fall plans are the ongoing best friendship of his former castmates Lauren Conrad and Heidi Montag (then his girlfriend, now his wife); what makes him the Delta variant is that a feud involving him caused the two women to break ties.

There have been countless variations on the form, with references spanning film (the happily engaged couple in “Crazy Rich Asians”/the mother-in-law; Meg Ryan in “You’ve Got Mail”/the chain that runs her character’s independent bookstore out of business), fine art (a devotional fresco of Jesus Christ/the woman who botched its restoration), YouTube videos (Dakota Johnson’s lime bowl/her lime allergy) and, of course, reality TV (the Kardashian-Jenner family/Blac Chyna).

Just like the drama between Mr. Pratt, Ms. Montag and Ms. Conrad, the meme, which may seem trivial at first, has a lot of emotion behind it.

“The meme indicates that people are coming to terms with the fact that the forthcoming season may look devastatingly like the ones that came before it,” said Heather Woods, an assistant professor of rhetoric and technology at Kansas State University who has done research on memes. “It suggests that folks recognize that the light at the end of the tunnel remains many months away.” She described the format as a “eulogy for the fall we could have had.”

In addition to providing an outlet for those feelings of loss, the memes help to communicate the risk that the Delta variant poses. This highly contagious strain has caused new coronavirus outbreaks around the United States, the worst of them in areas where vaccination rates are low. And while vaccines are highly protective against Covid-19, breakthrough infections can occur, though they remain uncommon.

“They are moving the message that Delta is in our communities and that we should prepare as such quickly and efficiently,” Dr. Woods said of the meme makers. “I would not be surprised if people who are making, seeing, sharing the meme are not also making pandemic contingency plans given widespread transmission.”

Over the course of the last 17 months, coronavirus memes of all kinds have taken off online: the 2020 challenge (a compilation of 12 photos, one for each month of the year, each reflecting a different emotion), “my plans/2020” (a precursor to the Delta variant meme) and “don’t worry about what’s in the vaccine” (if you consume questionable things). Though often lighthearted, they have helped document the pandemic’s turning points.

“Everyone goes through various forms of trauma that connect us as humans at one point or another — death in the family, the experience of a breakup — there are certain experiential things that connect us,” said Whitney Phillips, an assistant professor of communication and rhetorical studies at Syracuse University. “But Covid is unique in that it is happening right now, in the moment, we are having similar experiences at the same time.” Because the jokes are so widely relatable, she said, they tend to spread quickly.

In years to come, these memes could serve as historical artifacts, reflecting the frustration and fear of this particular moment in the pandemic. Like all memes, the Delta variant ones “offer an opportunity for a collective, collaborative writing of the past, present and future,” said Dr. Woods. And they’re effective in part because “they are interactive, iterative and community-based. They are collective by definition.”

Except, perhaps, in one respect: When did everyone make fall plans?