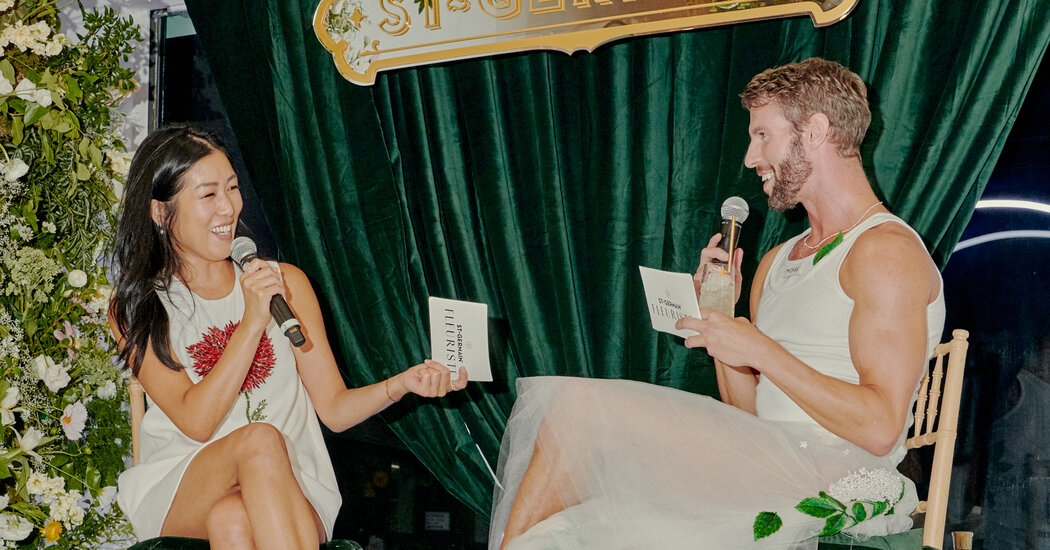 On a Thursday night in August, in an empty storefront in SoHo, a group of guests in well-considered outfits gathered.

It wasn’t strictly a party, although there were flowing cocktails.

It wasn’t a seminar or conference either, although the hosts — James B. Whiteside, a principal dancer with the American Ballet Theatre, and Laura Kim, a creative director of Oscar de la Renta — led discussions about how their industries should change in the wake of the pandemic and about wildfires and the Black Lives Matter movement.

The event also wasn’t a performance, although at one point Mr. Whiteside, 37, performed a solo show in a white tutu where he leapt and twirled from the floor to the top of the bar. “I wanted it to be fun and sassy,” he said. “Men don’t usually wear pointe shoes in classical ballet, but I wanted to here.”

Instead, the weekend-long event was billed as a salon — a term for gatherings of often like-minded individuals to discuss and analyze topical issues, often over food and drink.

Phillip Lim and Prabal Gurung, both fashion designers, were in attendance, along with Melvin Lawovi and Chloe Misseldine from the American Ballet Theatre. Many guests, all of whom had to show proof of vaccination, said it was about time for artists and performers to meet and shake things up.

“I cannot classify this type of event, and I think that is successful,” said Mr. Lim, 47. “That is what culture is about right now. It’s about the birth of something. Everyone is so quick to get back to what we are familiar with, but I think we should pivot and adjust and rethink everything.”

Across the country individuals and companies are staging their own salons. They may resemble cocktail parties or seminars or networking events — and some are sponsored, as the SoHo salon was, by St. Germain liqueur. But they are distinguished from those other events in one important way: all participants are expected to partake in communal, meaty conversations while having fun at the same time.

“At cocktail parties you can just have a conversation and maybe you will meet someone interesting and marry them or go into business with them or get a good recommendation, but a salon has a formal structure,” said Peter Hoffman, a chef who hosted many salons at his New York City restaurant Savoy, which closed in 2011. “At the salon you are there to learn and think and discuss as a group of people.” Mr. Hoffman, 65, is considering resuming salon-hosting at his home in SoHo when the coronavirus is less of a major concern.

Historically, salons have become popular after dark periods, said Jesse Browner, author of the 2003 book “The Duchess Who Wouldn’t Sit Down: An Informal History of Hospitality.” One of the very first salons, hosted in Paris by a marquess named Catherine de Vivonne, happened in the early 1600s after a period of religious warfare.

“When it first began it was the only place in France where you could have civilized conversation and hear immortal wisdom from some of the best minds of the generation,” said Mr. Browner. This salon is also credited with bringing the practice of eating with a fork to France (forks were already being used in Italy, Spain and the Netherlands).

Another great salon was introduced after World War I by Gertrude Stein. It counted Pablo Picasso, Ernest Hemingway and F. Scott Fitzgerald as regulars; it also hosted Jane Peterson, an American Expressionist painter, and Mildred Aldrich, an American journalist. “In bringing them all together under one roof, she helped them see what they had in common and thus turned modernism in to a coherent movement,” said Mr. Browner said of Stein.

Like those hosts, many others now feel the time is ripe to gather a group and reinvent the future.

Susan MacTavish Best, founder of Posthoc, a company that plans social gatherings, has been hosting salons in her loft in SoHo since 2015. During the pandemic she was approached by so many individuals and brands wanting to host their own salons that she launched The Salon Host, an online planning resource for what she calls “raves for the intellect.”

She now organizes salons for Calm, the meditation and sleep app, Columbia Records and the University of Southern California San Francisco. This summer, the Templeton World Charity Foundation, a research charity, gave her a quarter of a million dollars to plan a series of salons across the United States and England on the topic of human flourishing. To avoid spreading the coronavirus, Ms. Best requires that all salon-goers and hosts follow local and C.D.C. guidelines around gathering. Her how-to guide encourages the same, in addition to temperature tests.

For the Templeton salon, which was hosted in June, she gathered doctors, journalists, venture capitalists and academics in her New York City home to discuss the human microbiome over mezcal cocktails and lamb meatballs. “The ages ranged from 20s to 90s,” she said.

R.M. Michaële Antoine, 33, lives in San Diego and runs a company named Curios that performs communication training for businesses. She started hosting salons during the pandemic, first virtually and then in person, about topics including sex education (she had people write down a safe word on their name tags as an icebreaker) and salaries (or, why we are so hesitant to talk about money).

“I think these conversations have to be intentional. You can’t just get people together and give them food and see if they talk about something interesting,” she said. “People are craving a real conversation after a time of isolation and death and confusion. I think people want to be reminded of their humanity and one of the best ways to do that is through a real conversation.”

“There is nothing like the buzzy feeling you get when you have a deep, thoughtful, intentional conversation,” she added.

Ziv Shafir, 36, a health care lawyer and strategy consultant, moved to Los Angeles during the pandemic, and started hosting weekly salons at his home to make like-minded friends and expand his community. (These events have been held outside, with guests who have all been vaccinated.) He decided to theme them around psychedelics, a class of drugs that he said helped him battle depression in the past and which have compounds that are being studied for a range of mental health problems.

He invited friends and friends of friends to sit around his dining room table and formally discuss topics from the business of psychedelics to their health benefits. “It loses its intrigue if it is something posted on Eventbrite,” he said. “It has to be a bit of an insider community.” He serves gnocchi with pesto sauce or dates filled with cashew butter and éclairs and puts out wine for those who want it.

“It’s not really a dinner party, because it’s more than that, but it’s not really a seminar either,” he said. “The word salon kind of captures the spirit behind it. It’s about social connection and elevating the discussion.”

Diana R. Malhis, 37, an entertainment and technology lawyer in Los Angeles, who attended Mr. Shafir’s salon in August about psychedelics, said: “Perhaps it is not so different from book clubs where a group of like-minded individuals come together to discuss what they have read with a social aspect to it, or a networking event/membership ring, or even a music and song circle.”

Will Cotton, an American painter who invites (vaccinated) people to his Tribeca apartment once a month for a life drawing session, said: “To be honest, I don’t really call my gatherings salons, but other people do.” Cynthia Rowley has attended. Daphne Always, the transgender cabaret performer, is the current model. Participants create art and then spend hours drinking wine, noshing on smoked salmon and dips, and discussing art deals and gallery openings.

“Being an artist is a very solitary profession and I spend my days basically alone in my studio, so this way I can introduce a social element into my painting day,” said Mr. Cotton. “It’s definitely about people coming together and having interesting art talk.”

Only time will tell what changes might emerge from that experience. “We joked all the time before our salon, ‘Do you think that Picasso and Hemingway knew that what they were doing in their salon was a big deal?’” Ms. Kim said. “I wonder what people will think about our salon one day.”