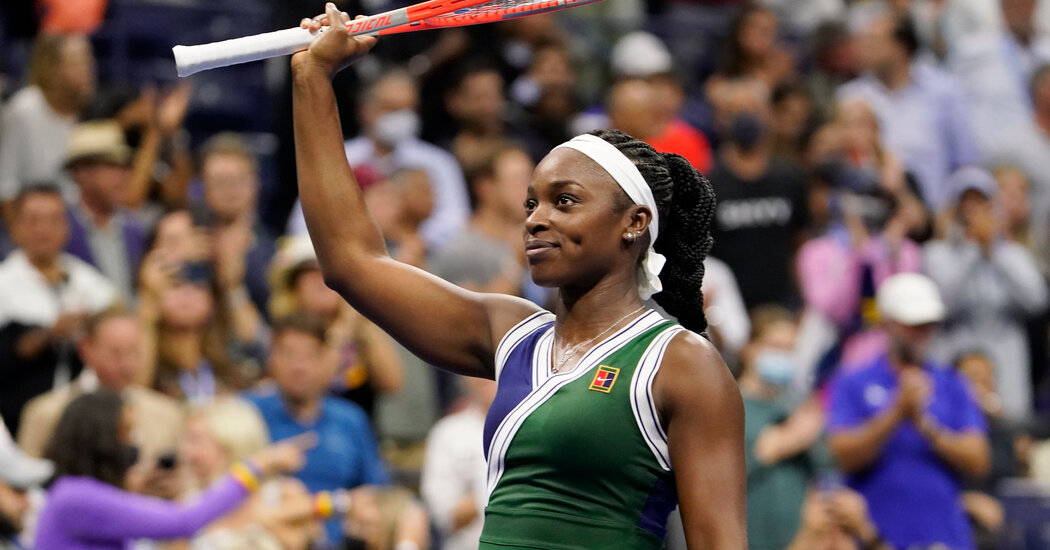 A U.S. Open night session at Arthur Ashe Stadium is an opportunity but also a responsibility.

Star power is highly recommended to fill the vast air and space, and Serena Williams has been providing it for more than 20 years, winning and losing memorably and sometimes tumultuously (see the 2018 U.S. Open final).

But the guard is changing in women’s tennis, and with Williams out of this U.S. Open with a hamstring injury and with her 40th birthday approaching, Wednesday night was left to Sloane Stephens and Coco Gauff, the two leaders of the American generations who have followed Williams and her older sister Venus.

They are big tennis shoes to fill, and it is surely fairer to all involved not to expect them to be filled anytime soon. It might also have been wiser not to play a night session at all on Wednesday considering the storm that later flooded roads and shut down not only the U.S. Open’s Louis Armstrong Stadium but the subway and made it a major challenge for fans, players and officials to make it home. The court in Ashe Stadium stayed dry as torrential rain pounded on its drumhead of a closed roof.

Stephens, 28, won the 2017 U.S. Open and remains a formidable talent but has been a flickering flame since that unexpected triumph. Gauff, the youngest player in the top 100 at age 17, is not yet ready to dominate but is certainly ready to impress, and was, at No. 21, the highest seeded American to play singles in this U.S. Open.

This was the first match but hardly their first meeting. Both Gauff and Stephens are based in South Florida and have worked with some of the same coaches. Gauff came to Stephens’ 21st birthday party. Stephens came to Gauff’s 10th.

“All my friends were excited that Sloane Stephens is at your birthday, professional tennis player,” Gauff said. “It was really cool.”

Two years later, according to Stephens, she and Gauff hit together at South County Regional Park in Boca Raton, Fla. That was of limited tactical use on Wednesday night.

“I definitely don’t remember how her ball felt when I was 12,” Gauff said with a good-natured chuckle. “She definitely was probably taking some pace off then.”

But Stephens was not playing nice this time, even if she was nothing but supportive of Gauff after her 6-4, 6-2 victory. Since the death of her grandparents and an aunt from Covid-19, she has rededicated herself to her craft in 2021, dropping weight, logging more hours of fitness and practice and rebuilding the platform for a return to the elite with the help of new coach Darian King, a former men’s tour player from Barbados.

Stephens is not back yet, as her ranking of 66 makes clear, but she did an excellent impression of her best tennis against Gauff. She set the pace and kept Gauff off balance with her signature shot: her forehand, once judged the finest in the women’s game in a New York Times poll of experts. She defended with quickness and conviction, put a remarkable 84 percent of her first serves in play and won 80 percent of the points when she did.

It was enough to put her back in the third round, where she will face the former No. 1 Angelique Kerber, who defeated Anhelina Kalinina on Thursday at Arthur Ashe Stadium. Their match was postponed the day before by the rain that blew horizontally through the gap under the roof on Louis Armstrong Stadium, ending all play.

Stephens is in a rough-and-tumble section of the draw, where defending U.S. Open champion Naomi Osaka also lurks, but a deep run is hardly out of the question. When Stephens truly finds her groove, watch out. I asked her if she had felt Wednesday night’s performance coming.

“Obviously it’s tough when you’re unseeded,” she said. “You have tough first rounds. It’s harder to work your way into the tournament, so I think now I’m at the point where I’m able to be really competitive at the beginning of the tournaments, playing against top players. Obviously coming out of the pandemic, it was rocky road. I think for everyone it hasn’t been too consistent. I think you’ve just got to ride the wave. It’s kind of coming together, which is nice.”

Arthur Ashe Stadium is the place where it all came together for Stephens in 2017. She had returned to the tour only two months earlier after major foot surgery and was ranked just 83rd, but she beat Venus Williams in an all-American semifinal and routed Madison Keys, her best friend on tour, in an all-American final and then sparked laughter by looking wide-eyed at her $3.7 million champion’s check.

Unseeded again, she and Keys had to face off in the first round this year, with Stephens coming within two points of defeat before prevailing in a third-set tiebreaker.

“It’s a happy place,” she said. “Obviously I have had a lot of good memories there. For me, it’s a feel-good. I think being in this position, trying to work my way through the tournament, have tough matches, it’s nice to have that comfort, those moments to look back on.”

She has yet to win another Grand Slam title, coming close in 2018 before losing to Simona Halep in the French Open final. But though she has continued to run hot and cold, top coaches will tell you that Stephens should be much higher in the rankings with her talent and tools.

It is a question, in part, of commitment. “Sloane is in the best physical condition she’s been in years,” said Nick Saviano, a veteran coach who has long been a mentor to Stephens and watched her victory over Gauff on television. “She used a great blend of neutralizing defense and power and also had excellent court demeanor and presence. She is playing as well as anyone in the tournament.”

The trick is sustaining it, but Stephens seems clear that one of her motivators is using her stardom for causes she holds dear: her foundation that promotes education and healthy lifestyles for youth and the modest $20,000 college scholarship fund she started last month in memory of her grandparents, who prioritized education, and that she hopes grows into something bigger.

“I know how difficult it’s been the last year to 18 months for kids trying to pursue their higher education with everything that’s going on,” Stephens told me.

Stephens has had her own challenges, including the two weeks she spent in hard quarantine in January ahead of the Australian Open after someone tested positive for the coronavirus on her charter flight to Melbourne. She attended the funerals for her grandparents remotely during her quarantine: something she said she will “probably regret for the rest of my life.”

But she was in a better place on Wednesday night before she headed out into the stormy weather to return by vehicle to her lodging. Safely into the third round, she posed for photographs in front of a U.S. Open sign with her mother Sybil in the hallway outside the locker room. Fellow U.S. Open champions Chris Evert and Lindsay Davenport stopped by to congratulate Stephens.

“Good luck the rest of the tournament, Sloane,” Evert said as she took her leave.

The question is: how much tournament does Stephens have left?