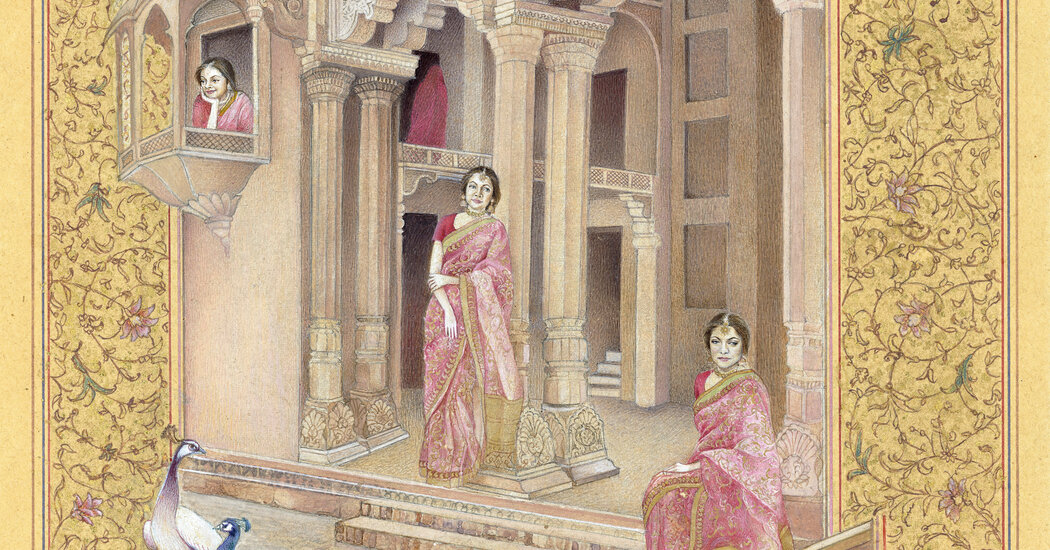 In a recent essay in The New York Times, the Pakistani-born artist Shahzia Sikander recalls the first question she was asked when she arrived at her M.F.A. program in the United States: “Are you here to make East meet West?”

The question chafed. What could those terms possibly mean for Sikander, whose work borrows from and upends the sumptuous and exquisitely detailed Central and South Asian miniature (or manuscript) painting of the 16th to 19th centuries — an art form woven from the intermingling of Safavid, Mughal, and European empires?

In the paintings, drawings, sculpture and animations on view in “Shahzia Sikander: Extraordinary Realities” at the Morgan Library & Museum, East and West, along with other apparently opposed terms — masculine and feminine, abstraction and figuration, traditional and contemporary, here and there — morph and bleed into each other. One comes away hyper-aware of the ways that our worlds, past, present, and even future, are inextricably linked.

The exhibition focuses on the first 15 years of the artist’s career. It begins with a selection of work from her student days at the National College of Arts in Lahore, where she studied under Bashir Ahmad, a professor who was reviving the miniature tradition practiced by court painters. Contrary to what ambitious young artists were doing at the time, she threw herself into the artistic idiom. Works like “The Scroll,” her undergraduate thesis project, and portraits of her sari-clad friend, “Mirrat I” and ‘‘Mirrat II” (all 1989-90), established her as the founder of the “neo-miniature” movement in Pakistan before she ever arrived in the United States.

Tea-stained paper; vegetable dyes and watercolor applied with impossibly fine, handmade brushes; decorative borders; architectural settings; and recurrence of figures to indicate a story unfolding over time — all of these hark back to miniature traditions. Even then, there is an impulse toward feminism and abstraction that would characterize her later work. The art of the manuscript had long been the purview of men, as makers and subjects; Sikander’s protagonists here are women who seem to haunt, rather than merely occupy, the houses through which they move. Her architectural renderings push the distinctive perspectival composition of Mughal painting in an almost Cubist direction.

After graduating from the Rhode Island School of Design in 1995, Sikander began isolating and even exaggerating features she found in traditional manuscript painting, so that they functioned as abstract elements — decorative floral motifs exceed the page’s borders and become scrims or overlays, small dots or globes screen surfaces, animals and grotesqueries float freely on the page.

Her work becomes almost collagelike — an effective way of communicating the strangeness of the immigrant’s experience, in which everything in the world is there for the taking and endlessly foreign at the same time.

In the show we see her beginning to translate this overlapping of images and styles into three-dimensional space via the use of layered tracing paper. Ink and paint veer between obdurate opacity and delicate transparency. She works in larger and larger formats, including mural-size installations. In one of the more recent works in the show, “Epistrophe”(2021), she revisits many of her familiar abstract and figurative motifs, rendering them in gouache and ink on strips of tracing paper in large, gestural strokes.

In 1993 an avatar emerges: a headless woman (occasionally an androgyne) whose arms and feet sprout tangled roots that dangle uselessly in the void instead of reaching into soil, a poetic evocation of the diasporic experience. It recurs in slightly varied forms over the following years, including in the 2001 panel “A Slight and Pleasing Dislocation,” where her many hands hold both weapons of war and tools of justice. Durga, the many-armed Hindu goddess who embodies both male and female principles, makes many appearances. Gopis — the lovely female cowherds that exist in Hindu mythology in the role of flirts and lovers of the god Krishna — free themselves from their narrative inconsequence, becoming powerful and even aggressive rather than merely decorative. In “Gopi Crisis” (2001), their distinctive, top-knotted hairstyles detach from their heads and swarm like feral birds on the surface.

When she lived in Houston from 1995-97, she worked with artist Rick Lowe on Project Row Houses in the city’s largely Black Third Ward. The consequence of this intense introduction to U.S. racial politics were works like “Eye-I-ing Those Armorial Bearings” (1989-97), in which the righteous Durga’s arms sprout from a sensitive and finely rendered depiction of Lowe’s upside down head. This image appears alongside stereotyped Black figures from European medieval manuscripts, a move meant to highlight the anti-Blackness embedded in our most revered art historical traditions.

As her career exploded, especially after her move to New York City in 1997 when she became a go-to figure for curators interested in multiculturalism and “global” contemporary art, Sikander was dogged by the assumption that, as an artist and a Muslim woman, she was “liberated” by her move to the West. After 9/11, in part owing to the pervasive Islamophobia that accompanied American military interventions in Iraq and Afghanistan, her works became more explicitly political: less beautiful, in some ways, but bracing in their resistance to hardening nationalisms that were emerging around the world.

“No Fly Zone” (2002) is based on a Safavid dynasty work titled “The Ascension of King Solomon to Heaven.” In Sikander’s version the wise king — an important figure in Judaism, Christianity and Islam — disappears from his seat of power, which rises unoccupied on heavenly clouds. The throne is now surrounded not by a host of attendants but by angels sporting striped wings starred in red, white and blue, inchoate, monstrous beings and fighter jets. An image of exaltation and joy is transformed into one of chaos and threat, presided over by American aggression.

At the same time, she continued her mission to multiply and complicate representations of South Asian and Muslim femininity. Speaking recently of her work “Ready to Leave” (1997), in which she overlaid the image of the Greek mythological eagle-lion, the griffin, with a chalawa, a Punjabi word for poltergeist who possesses small farm animals in folklore. In a recent email, she explained that she identified with the creature — “someone who is so swift and uncapturable that no one can get a hold of it or pin it down” — as part of her determination to resist the categories constantly being imposed on her: “Are you Muslim, Pakistani, artist, painter, Asian, Asian American, or what?” The answer, clearly, is yes — all of these, and an endless number of other things besides.