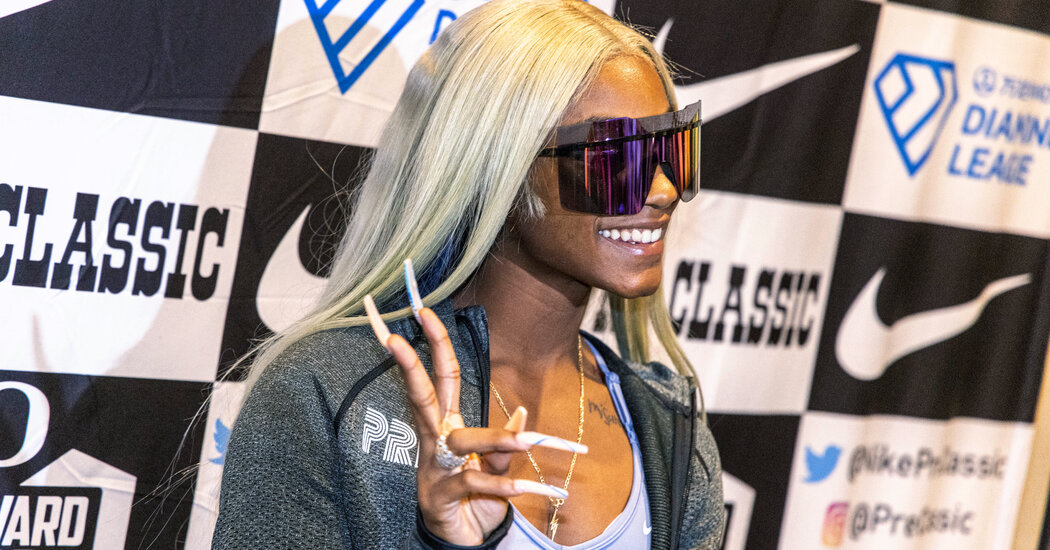 Sha’Carri Richardson sent a message before she returned to the track on Saturday.

“Aug. 21,” she wrote alongside a video she posted on Instagram this week, “and I’m not playing nice.”

The message was clear: Weeks after a positive drug test cost her Olympic dream, Richardson was, in the video and in real life, ready to run again. On Saturday at Hayward Field in Eugene, Ore., though, her return to competition at the Prefontaine Classic did not go as planned.

Facing a field that included all three Olympic medalists in her marquee event, the 100-meter dash, Richardson was beaten badly, finishing last in a time of 11.14 seconds. That was more than half a second behind the time of Elaine Thompson-Herah of Jamaica, the Tokyo gold medalist.

Thompson-Herah’s countrywoman Shelly-Ann Fraser-Pryce finished second, and Shericka Jackson came in third, replicating the podium from the Tokyo Olympics. Richardson, running in the Lane 4 spot reserved for the favorite, was out of contention after only a few strides.

In an interview shortly after finishing, though, Richardson oozed confidence after what was a fairly demoralizing performance.

Richardson’s return to competition came a little more than two months after she won the 100 meters at the U.S. Olympic Track and Field Trials, a race that many thought would be the first act in a summer star turn. Richardson was an instant sensation — her explosive speed matched her flowing orange hair and her abundance of swagger.

But she never got to run in Tokyo: Richardson subsequently tested positive for marijuana and was disqualified.

Richardson said she used the drug to cope with the death of her biological mother, which she had learned of earlier in June. But the consequences were severe: The violation erased her win at the trials and eliminated her from qualification for the Tokyo Games. It also carried a 30-day suspension from competition.

At the time, there was speculation that U.S.A. Track and Field, the governing body for the sport in the United States, might try to get her to the Olympics by including her on the 4×100-meter relay team. That race was scheduled for near the end of the Tokyo meet, after Richardson’s suspension would have been complete.

But the rules did not allow for a substitution given her disqualification, and Richardson’s agent, Renaldo Nehemiah, said her team did not lobby U.S. track officials to find a way to include her.

“We never petitioned to be on the relay,” Nehemiah wrote in an email in early July.

In an interview last month, Nehemiah said that after the drug violation, Richardson needed a break from the overheated spotlight that her suspension had created. Her fame only grew with her absence from the Games.

Nehemiah said he and Richardson decided almost immediately to target Saturday’s Prefontaine Classic for her next competition, which took place on the same track where she had won at the trials.

In an effort to widen her focus beyond the Tokyo Games, which she was going to miss, Richardson wrote a tweet about shifting her attention to the major competitions during the next three years, which include world championships in 2022 and 2023 and the Paris Olympics in 2024.

The march toward those events began in earnest on Saturday. But her performance on the track did not match her talk off it.

“They’re not done seeing me yet,” Richardson said of her competitors, and surely those who doubt her as well. “Period.”