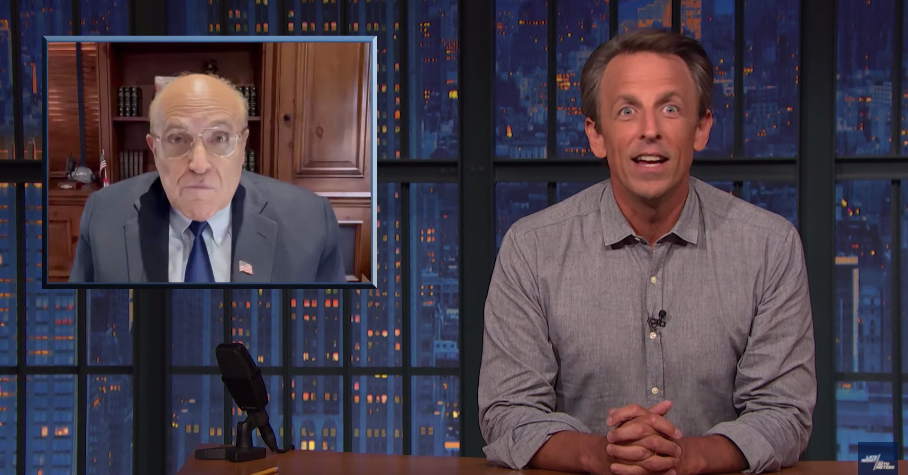 “You know how like six months ago, Rudy was the personal lawyer for the leader of the free world? Well, now he’s doing this.” — SARAH SILVERMAN, guest host of “Jimmy Kimmel Live”

“That’s right, he went from being America’s mayor to saying, ‘Hello, this is Rudy Giuliani. I want to wish ‘Deez Nuts’ a happy retirement.’”— JIMMY FALLON

“He has no idea what he’s in for. Right now, a prosecutor in the Southern District of New York is logging on to Cameo and asking Rudy to share the story of the time he went to Ukraine to dig up dirt on a political opponent to interfere in a presidential election. [imitating Giuliani] ‘This message is for Mr. DOJ. I hear you’re feeling discouraged at work. Well, let me tell you about the time my friend Don and I cooked up a scheme to extort a foreign government and got away with it. You know, it says here you want me to read you my text messages and your emails. Oh, hold on, someone’s banging at the door. Why are you yelling “police”? There’s no police in here.’”— SETH MEYERS

“I mean, this guy — this guy, who is a personal lawyer to the president of the United States, and now, he’s basically panhandling in the same place you can get a ‘Happy bat mitzvah’ message from Jamie Farr.” — SETH MEYERS